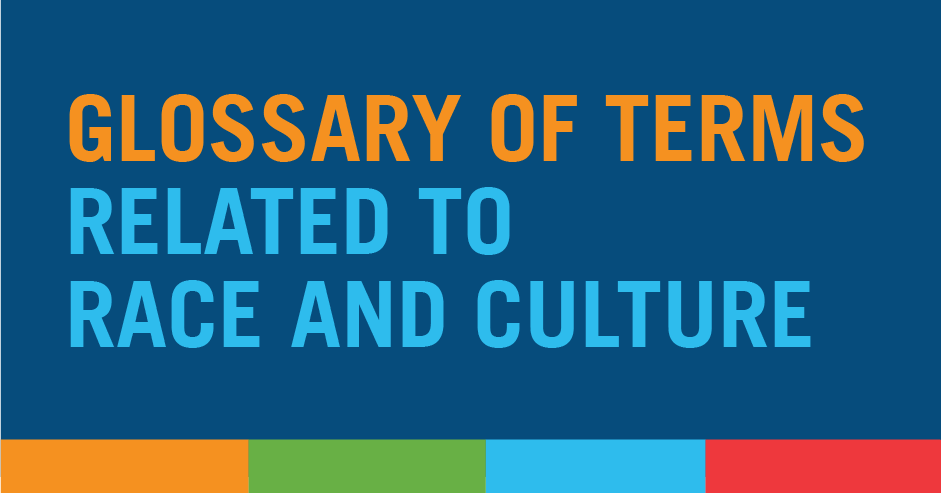 A person who stands in support of the “other”- typically a member of a dominant group standing beside members of a marginalized group. For example: a man who advocates for equal pay for women (Source: F Willis Johnson, Holding Up Your Corner).

Someone who makes the commitment and effort to recognize their privilege (based on gender, class, race, sexual identity, etc.) and work in solidarity with oppressed groups in the struggle for justice. Allies understand that it is in their own interest to end all forms of oppression, even those from which they may benefit in concrete ways. Allies commit to reducing their own complicity or collusion in oppression of those groups and invest in strengthening their own knowledge and awareness of oppression. (Source: OpenSource Leadership Strategies, “The Dynamic System of Power, Privilege, and Oppression” (2008) and Center for Assessment and Policy Development).

Beloved Community - Dr. Martin Luther King’s Beloved Community is a global vision in which all people can share in the wealth of the earth. In the Beloved Community, poverty, hunger and homelessness will not be tolerated because international standards of human decency will not allow it. Racism and all forms of discrimination, bigotry and prejudice will be replaced by an all-inclusive spirit of sisterhood and brotherhood (Source: The King Center).

A preference for or against, especially one that interferes with impartial judgment. Biases can be conscious or unconscious, meaning, we may or may not be aware of our biases (Source: F Willis Johnson, Holding Up Your Corner).

The acronym stands for Black, Indigenous, and people of color. Pronounced “bye-pock,” this is a term specific to the United States, intended to center the experiences of Black and Indigenous groups and demonstrate solidarity between communities of color. The word “indigenous” refers to the notion of a place-based human ethnic culture that has not migrated from its homeland, and is not a settler or colonial population.

Cultural Intelligence (CQ) is the ability to cross boundaries and thrive in multiple cultures.

Intended to increase the breadth and depth of racial justice work in the region through supporting organizations to build a shared analysis of race and racism, to engage in anti-racist organizational development and to move racial justice organizing campaigns (Source: Intergroup Resources).

Individual racism refers to the beliefs, attitudes, and actions of individuals that support or perpetuate racism. Individual racism can be deliberate, or the individual may act to perpetuate or support racism without knowing that is what he or she is doing. Examples: Telling a racist joke, using a racial epithet, or believing in the inherent superiority of whites over other groups. Avoiding people of color whom you do not know personally, but not whites whom you do not know personally (e.g., white people crossing the street to avoid a group of Latino/a young people; locking their doors when they see African American families sitting on their doorsteps in a city neighborhood; or not hiring a person of color because “something doesn’t feel right”). Accepting things as they are (a form of collusion). (Source: Flipping the Script: White Privilege and Community Building by Maggie Potapchuk, Sally Leiderman, Donna Bivens, and Barbara Major, 2005).

Institutional racism refers specifically to the ways in which institutional policies and practices create different outcomes for different racial groups. The institutional policies may never mention any racial group, but their effect is to create advantages for whites and oppression and disadvantage for people from groups classified as people of color. Examples: Government policies that explicitly restricted the ability of people to get loans to buy or improve their homes in neighborhoods with high concentrations of African Americans (also known as “red-lining”). City sanitation department policies that concentrate trash transfer stations and other environmental hazards disproportionately in communities of color. (Source: Flipping the Script: White Privilege and Community Building by Maggie Potapchuk, Sally Leiderman, Donna Bivens, and Barbara Major, 2005).

A process, not an outcome, which (1) seeks fair (re)distribution of resources, opportunities, and responsibilities; (2) challenges the roots of oppression and injustice; (3) empowers all people to exercise self-determination and realize their full potential; (4) and builds social solidarity and community capacity for collaborative action (Source: Glossary of Terms: Race, Equity and Social Justice).

The everyday verbal, nonverbal, and environmental slights, snubs, or insults, whether intentional or unintentional, which communicate hostile, derogatory, or negative messages to target persons based solely upon their marginalized group membership (Source: Micro aggressions: More Than Just Race).

Multicultural church is not simply about skin tone, but about the intentional engagement of cultures.

A pre-judgment or unjustifiable, and usually negative, attitude of one type of individual or groups toward another group and its members. Such negative attitudes are typically based on unsupported generalizations (or stereotypes) that deny the right of individual members of certain groups to be recognized and treated as individuals with individual characteristics (Source: Institute for Democratic Renewal and Project Change Anti-Racism Initiative, A Community Builder’s Tool Kit, Appendix I, 2000).

Race discrimination involves treating someone (an applicant or employee) unfavorably because he/she/they is of a certain race or because of personal characteristics associated with race (such as hair texture, skin color, or certain facial features). Color discrimination involves treating someone unfavorably because of skin color complexion (Source: U.S. Equal Employment Opportunity Commission).

Racial equity is the condition that would be achieved if one’s racial identity no longer predicted, in a statistical sense, how one fares. When we use the term, we are thinking about racial equity as one part of racial justice, and thus we also include work to address root causes of inequities, not just their manifestation. This includes elimination of policies, practices, attitudes, and cultural messages that reinforce differential outcomes by race or that fail to eliminate them (Source: Center for Assessment and Policy Development and OpenSource Leadership Strategies).

Racism is the combination of the power to dominate by one race over other races and a value system that assumes that the dominant race is innately superior to the others. Racism includes both personal and institutional racism (Source: 2016 Social Principles and Resolutions on Racism).

A stereotype is an exaggerated belief, image, or distorted truth about a person or a group, a generalization that allows for little or no individual difference or social variation. Stereotypes are based on images in mass media, reputations and repetitions passed down by our parents, church, educators, peers, and other influential members of society. Stereotypes can be either negative or positive, but they are limited and inaccurate (Source: BWAC Appendix C: Glossary of Terms).

Refers to the unquestioned and unearned set of advantages, entitlements, benefits and choices bestowed on people solely because they are white. Generally white people who experience such privilege do so without being conscious of it (Source: Peggy McIntosh, “White Privilege and Male Privilege: A Personal Account of Coming to See Correspon­dences Through Work in Women Studies” (1988) and Transforming White Privilege: A 21st Century Leadership Capacity, CAPD, MP Associates, World Trust Educational Services, 2012).