Volunteering to Make it Work 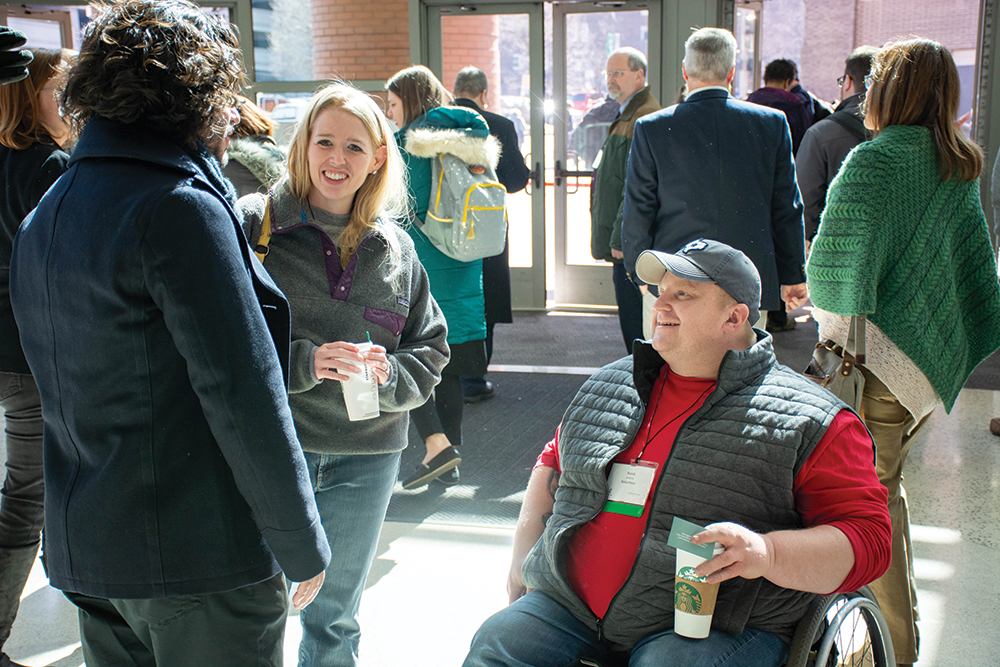 In the midst of constant change throughout General Conference, one thing was consistent no matter what was happening on the floor of the Dome: A red shirt emblazoned with volunteer on the back.

These red shirts represented the warm, welcoming smile you wanted, the answers you’ve been searching for, and the friendly conversation you didn’t know you needed. The Missouri and Illinois Great Rivers Conference volunteers, who proudly sported these red shirts, were the backbone of General Conference.

Volunteers were stationed at every point along the way from the airport, to hotels, to the Dome to assist delegates and observers know where to go and feel comfortable as they got oriented in a new city. Each day brought new tasks such as assembling nametags, transporting delegates from the airport, checking in attendees at registration and pointing them to their designated areas, and simply offering a calming presence as people dealt with emotions surrounding the decisions being made. In addition, a prayer room was available on the concourse for volunteers to pray with delegates and observers in a variety of ways, keeping the focus on God throughout the conference.

“Hospitality is my jam. It’s what I love to do,” Gastreich said. “So, it’s encouraging and exhilarating for me to be here and in that role. We told the volunteers, especially as General Conference was opening, that they were to be the church usher, greeter we all wish we had. The dream greeter.”

Delegates represent conferences from across the world, so this meant that volunteers had a wide variety of questions and needs to be met. As General Conference went on, volunteers became increasingly confident with their ability to point people in the right direction.

“The first couple of days, I thought my phone was never going to stop ringing. We were getting a lot of questions, but not so much anymore because they learned where things are and could answer questions. I think they really enjoyed knowing answers and helping people,” Caughlan said.

Caughlan and Gastreich, along with dome and General Conference staff, couldn’t speak highly enough of the volunteers. They were a critical part to the success of the event and comfort of delegates and observers.

“I’m grateful for all the volunteers. I think we’ve done an amazing job. I’ve heard good things. I’m sure we haven’t done everything perfect, but we’ve done well. I’m just grateful to everyone that has made this happen from the airport on,” said Gastreich.

Volunteers came from all over Missouri and Illinois wanting to help in any way possible, but one went above and beyond by flying across the world to be present for this historical event. Rev. Hank Jenkins is from Missouri, but currently resides in Oxford, England, because his wife has a research fellowship at the University of Oxford. When he found out General Conference was going to be in St. Louis, he knew he wanted to come be present and help in any way possible alongside friends he has been away from.

“Part of my excitement was being here and seeing so many familiar faces, but also meeting new people and seeing how God works in this community,” Jenkins said. “Even though in a lot of ways a lot of us here don’t agree on the issues we’re talking about, on some level we can grow as a community.”

Although volunteers were not part of the decisions being made and were asked to be a neutral party toward delegates and observers, they still had an important role in creating an atmosphere so people could process however they needed to.

“I’ve noticed that doing dome hospitality required me to change my emotions and be in a pastoral role at a certain point,” Jenkins said. “It didn’t mean I was saying ‘Hey, I agree with you, but rather, Hey, I love you and even though this isn’t working out the way you want, I still love you and God still loves you and that’s all that matters in this moment.’”

It was each volunteer’s goal to serve attendees in the best way possible. For many it was pastoral care, like with Jenkins and Len Delony who served at the spiritual direction prayer area. When Loni Fancher found out there were no walkers or wheelchairs at the Dome, she contacted and traveled to churches in the area to pick up several for attendees to use. Chantel Corrie collected and passed out coats, hats, gloves and scarves for Central Conference delegates who weren’t used to the Missouri winter.

There are countless examples of volunteer who went the extra mile to serve while at General Conference 2019. One hundred and seventy- eight individuals represented the Missouri Annual Conference perfectly by giving their time, gifts and talents. Thank you.