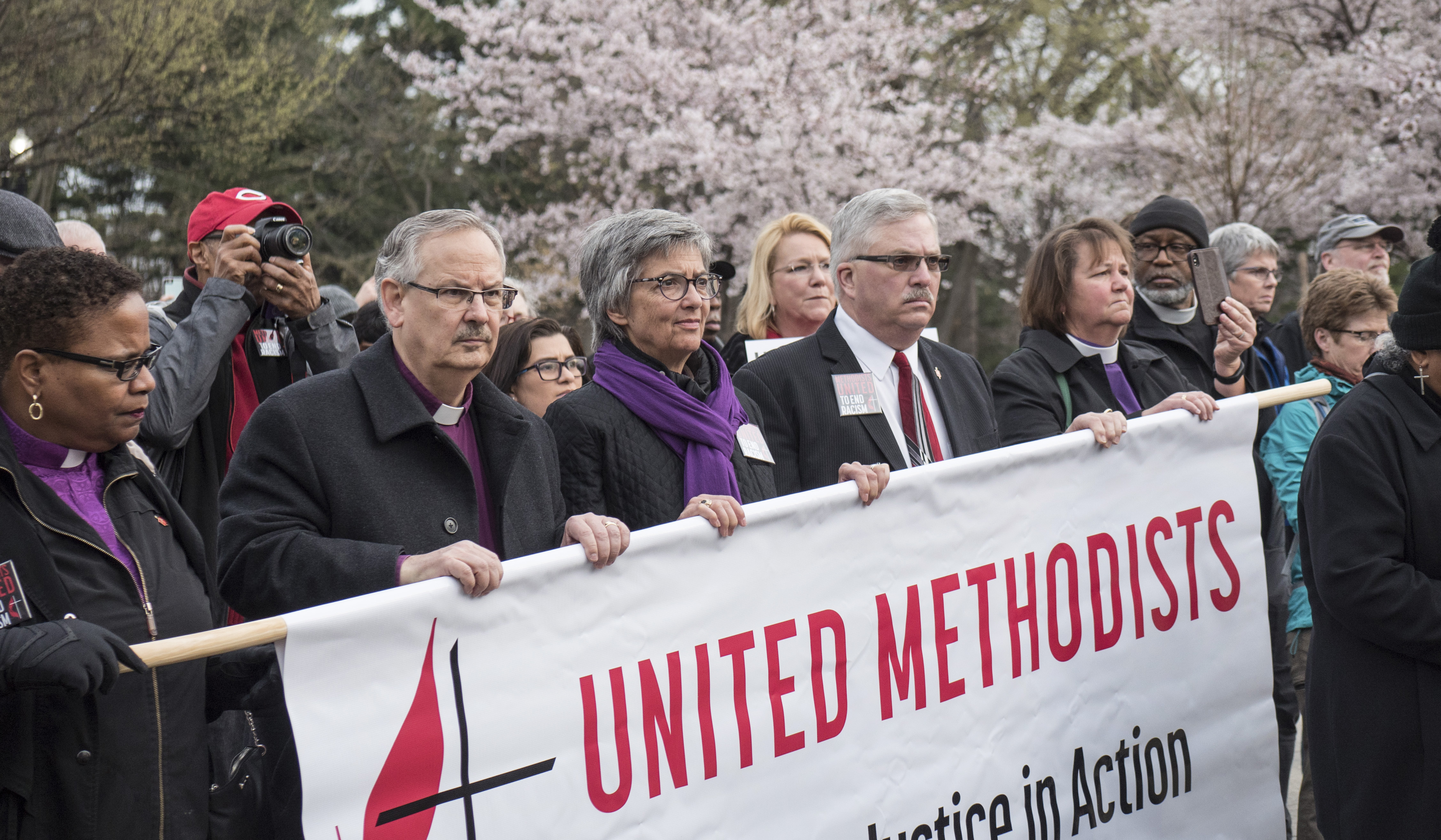 United Methodists joined with their hearts, feet and faith on the 50th anniversary of the death of the Rev. Martin Luther King Jr., as people around the world pledged anew to combat the sin of racism.

Gathering at daybreak near the King memorial, the “A.C.T. to End Racism” Rally drew thousands to the National Mall to pray and witness with one message: Racism is a sin and can be — must be — stopped.

The National Council of Churches, with its 38 member communions representing more than 45 million people, organized the rally, which was a gathering of the faith community in America — Christians, Jews, Muslims and others, said Jim Winkler, top executive of the council and a United Methodist.

“They’ve all come together, to not just commemorate the life and legacy of Dr. King and mark the 50th anniversary of his assassination, but to commit ourselves to end racism and to build our beloved community,” said Winkler, as he stood with several hundred others at a prayer meeting near the King memorial before the rally.

The pastor of nearby Mount Vernon Place United Methodist Church, the Rev. Donna Claycomb-Sokol, spoke to the prayer meeting. Her church, she said, stands as a witness to the sin of racism and to the power of repentance.

The church was founded in 1850, Claycomb-Sokol said, after a split in the then Methodist Church over slavery. “People insisted that the Southern church, the branch that believed holding people as slaves was a right, needed a ‘representative church’ in the nation’s capital,” she said.

“Our grand 1917 building was built as a monument for a denomination in which every bishop held slaves at one time,” she said. “It is a building where people walk below the words, ‘Methodist Episcopal Church South’ as they come inside, with ‘South’ standing not for geography, but for split, for slavery, for sin.”

Claycomb-Sokol said her congregation is confronting its racist history head-on and publicly.

“If you walk past our building today, you’ll read, ‘We repent of our roots in white supremacy’ on a banner that was hung on the 100th anniversary of the laying of our cornerstone,” she said. The church held an intentional service of repentance where members of the church signed the banner.

The Rev. Christopher Scott serves the Winfield United Methodist Church in Winfield, West Virginia. He and about 40 others from the West Virginia Conference took a chartered bus to the rally. His community, about 30 minutes outside Charleston, is mostly white. It’s his hope, as he returns from the rally, that God will start to break down racial and economic barriers in his community.

“I think it’s important to expand on one of the notions of what is Appalachia,” Scott said.

“We think stereotypically of the white coal miner. But we are a state with tremendous first and second-generation immigrant populations and a lot of racial disparity, even among our poor, that continues to affect our state.”

The Rev. Ken Crimmel, assistant to the bishop and director of connectional ministries in the West Virginia Conference, came to the rally because he believes “all people are really God’s people.

“It’s so easy for us in our context, because West Virginia is 94 percent white, to think everything is okay; that we all get along. We really have to sometimes have this brought to our attention that there are a lot of people who don’t enjoy the privilege that the majority enjoy.”

Attending the rally is also part of the conference’s commitment to the Call to Action resolution passed by the 2016 Northeastern Jurisdiction, he said. That resolution calls for “an effort to address, confront, and otherwise demand systemic fundamental and institutional change both within the church and the world...”

Missouri Area Bishop Bob Farr, who was 9 years old when King died, said he and many others from his area came to the rally because racism is an important issue there and for the whole world.

“We’ve had our share of racial tension and divide in our state,” Farr said. “The United Methodist Church has had a strong presence in St. Louis, in Kansas City, in Ferguson, to bring healing and a new vision for our world.” Unrest in Ferguson, Missouri, after police shot an unarmed young African-American man, fueled the Black Lives Matter movement.

Farr confessed that racism is a difficult issue that affects both rural and urban areas.

“Dr. King’s vision hasn’t come to completion,” he said. “It’s still an issue in most of our communities. The issue of classicism, which King also addressed, is rampant in Missouri. It is, too, for The United Methodist Church; we’re very much a middle-class, white denomination that is struggling how to reach across class lines.”

Local churches can start with a critical conversation about racism, first within the church itself and then with others in their community, he said.

“The easiest thing we do is we don’t talk about (racism),” Farr said, “or we pretend it’s not an issue in our church or in our city. Often we say, ‘I’m not racist.’ You know, I was 9 when King’s assassination happened; I didn’t know much of what was going on. The excuse I’ve always used is, ‘Well, I’m not a racist.’ I learned in the Ferguson incident that it’s not enough to be non-racist; you need to be anti-racist and do something. And that’s hard.”

Bishop LaTrelle Easterling of the Baltimore-Washington Conference, said that King’s life and ministry shaped her own life and ministry — especially his boldness, his willingness to speak truth to power no matter the cost.

“In some ways, I fear that we are receding rather than progressing on the issue of race,” she said.

“The rhetoric being used in the public square and even now from some pulpits is very troubling. I wonder if Dr. King, if he were still alive, would wonder today if he was in time warp. I hope we awaken to what’s really happening in our country before it’s too late,” Easterling said.

She said she prays the work to fight racism can become something “we talk about in the past tense” and that 50 years from now her children and grandchildren won’t have to still be fighting for full equality, full justice. “It’s my prayer that we will be the people we say we are: transformed by the gospel witness,” she said.

Jackie DuPont-Walker, the social action officer of the African Methodist Episcopal Church and one of the event organizers, said the rally is just the beginning of the work to combat racism. She said the National Council of Churches decided that it had not done enough to combat the sin of racism.

DuPont-Walker echoed many others when she expressed her hope that people who leave the rally go back to their own congregations or faith communities and start building relationships.

“Just go knock on your neighbors’ doors and say, ‘It’s time to get to work, ya’ll.’ There are people who have given up on the church because they say we’re hypocrites,” she said. “They’ll see that we’re being real, that we’re working together in the community to make a difference.”