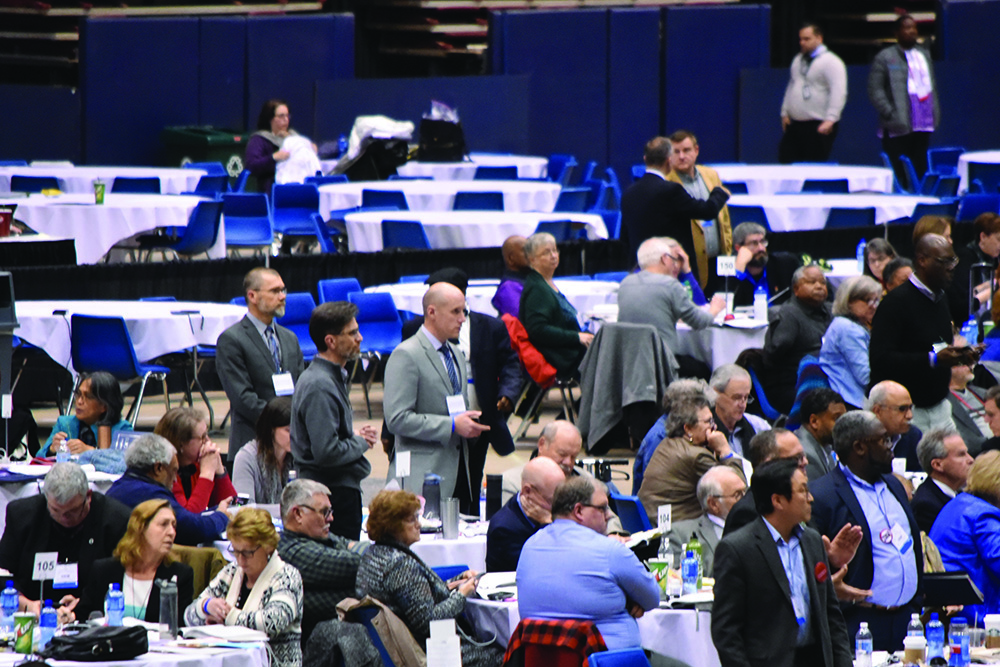 On March 27 and April 4, 2019, leaders interested in a fully inclusive church from across The United Methodist Church gathered in Dallas, Texas and in Atlanta, Georgia. Facilitated by Gil Rendle and Bishop Janice Huie, the aim of the meetings was to bring together thoughtful leaders representing various stakeholders in the church to see if a consensus could be reached about a better way forward for The United Methodist Church than that which was passed at General Conference 2019.

Rev. Matt Miofsky of The Gathering in St. Louis attended the meeting in Dallas. “I was impressed and hopeful by the diversity of voices present,” he said.
The conversation wasn’t just hinged solely on disagreement with the traditional first plan, but also involved hope for a better United Methodist Church in the future. The plan for the meeting was to discover elements that unite people who are opposed to the traditional plan and look for consensus around what direction to take in the future. The group is considering three options for those opposed to the traditional first plan:
Each of these options come with myriad challenges and opportunities. The initial meetings in Dallas and Atlanta included about 90 people. On May 20-22 there will be another meeting at Church of the Resurrection in Kansas that will be attended by about 10 people from each Conference, totaling around 600. That meeting will be about charting out possible next steps.
Things taking place within the framework of General Conference will have to happen quickly; the deadline for legislation is September 1.
“For us, General Conference contradicted a core tenant of who we are,” Miofsky said. “It left people at The Gathering feeling like our church isn’t wanted by our denomination.”
Rev. Andy Bryan was a delegate at General Conference. He felt a lot of pain from what happened there but has found comfort in the church since then. Being able to process and reflect with clergy colleagues who are wrestling with the same issues has been helpful. Much of the congregation was very affirming and supportive of him. There are also people on both sides of the issue who left the church.
“Some left because of the decisions made at General Conference, and some left because of my response to it,” Bryan said.
He said even people within the church who are very conservative on other issues don’t understand the resistance to the compromise plan that was proposed at the Special Session.
Bryan is friends with a nearby pastor who has a traditional stance. When that pastor has been approached by people who say they need a more inclusive church, he would point them in the direction of Campbell. Likewise, when Bryan has been approached by someone saying that they had to have a church with a more traditional stance, he would refer them to this one.
“We were really functioning in a way that we envisioned the One Church Plan would work,” he said.
Bryan is changing appointments this year to Manchester, which is known for being a welcoming, inclusive church. He understands that there are a diverse array of perspectives within the church, and welcomes that “Big Tent” school of thought, as long as they abide by the rule of “do no harm.”
One shift for Bryan was he stopped trying to convince people not to leave the denomination. He said he now says if they want to leave, they probably should. Staying to fight for change can ultimately be too exhausting and too harmful.
“I’m staying because the church that I saw in February bears little resemblance to the church that I grew up in, and that my family served in for six generations before me,” he said. “When a perfectly viable compromise that is being offered is rejected out right and the response is to make the rules harsher, I don’t see where the grace is in that. I’m fighting to reclaim the United Methodist Church that I know and love.”
Bryan feels the main reason people appear to get along so well in the Missouri Conference is that everyone is avoiding talking directly about the difficult issue. He believes the better place to be is where we love each other enough that someone can say what they honestly believe and the someone can disagree but be OK with them saying it.
He doesn’t think avoidance of talking about things will hold for long. “The time for hemming and hawing is long past,” Bryan said.
Miofsky agrees. “We’re not going to do nothing,” he said. “A year from now things will look different.”
After the meeting at COR people will be reporting back to their annual conferences. In Missouri, Miofsky will be doing that in Springfield, immediately following the conclusion of Annual Conference Session, from 4–6 p.m. on Sunday, June 9 in the Colorado Room of the University Plaza Hotel.
News