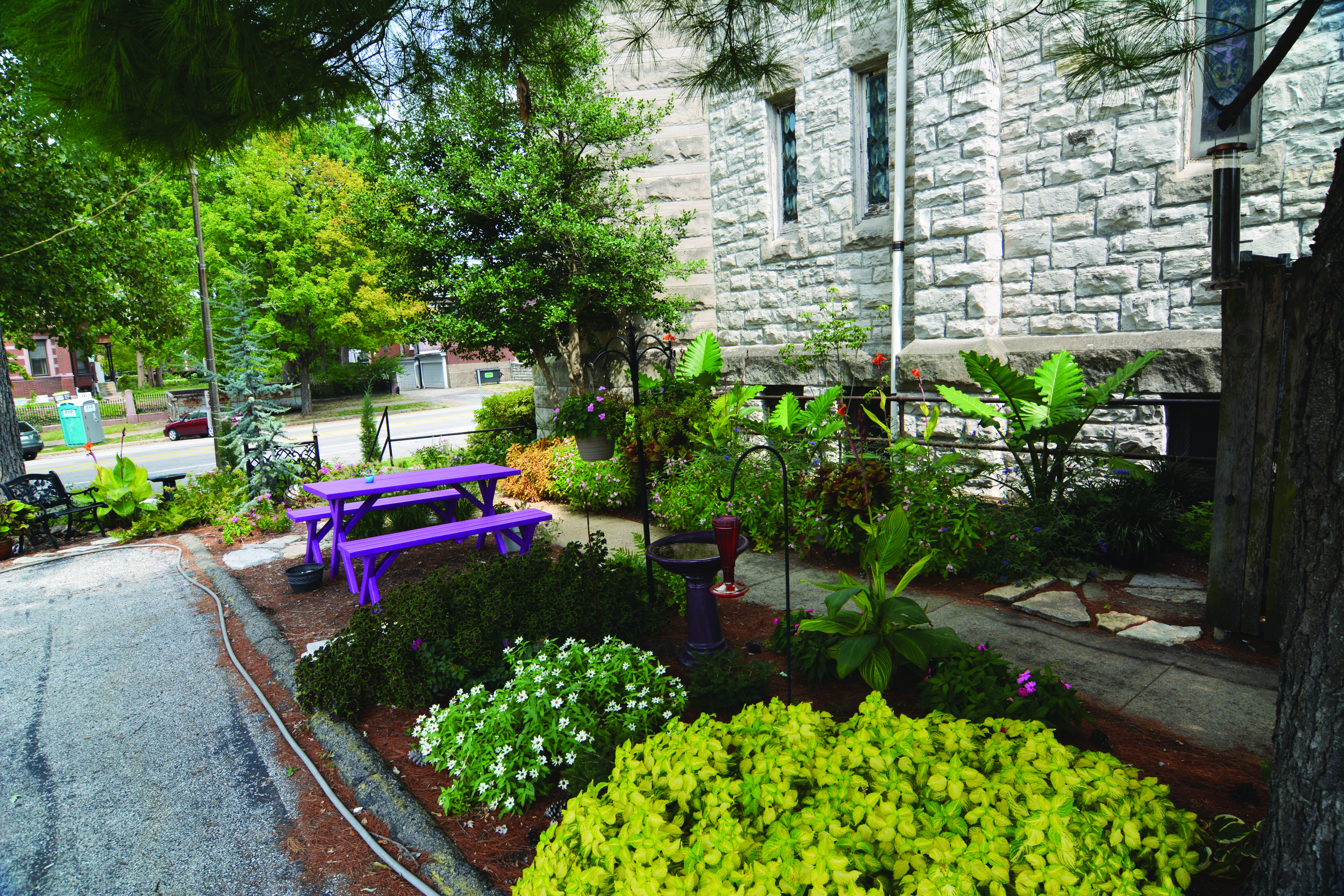 You don’t have to be a gardening guru to immediately recognize that the grounds in front of Lafayette Park UMC in St. Louis are something special. It’s at the level in which everyone takes notice. That’s exactly what George Grove was going for. “I wanted some eye catching splashes of color,” he said. “I think (the grounds) should say, ‘We’re here! We’re alive!’”

It all started with a rock. Grove had wondered about a large rock by the tree near the church sidewalk. He learned it had been brought there by Rev. Kathleen Wilder’s husband, Jim Wilder, from a mission trip to Juarez, Mexico. Grove learned this at a memorial service for Jim when he died in 2014.

“If not for hearing that story, none of this would have happened,” he said. The garden just kept moving down toward the street then expanded to the green area between the church parking lot and the street. The garden has bright-colored flowers, but also has vegetables, tropical plants and even a cotton plant so Grove can show kids where there clothes come from. 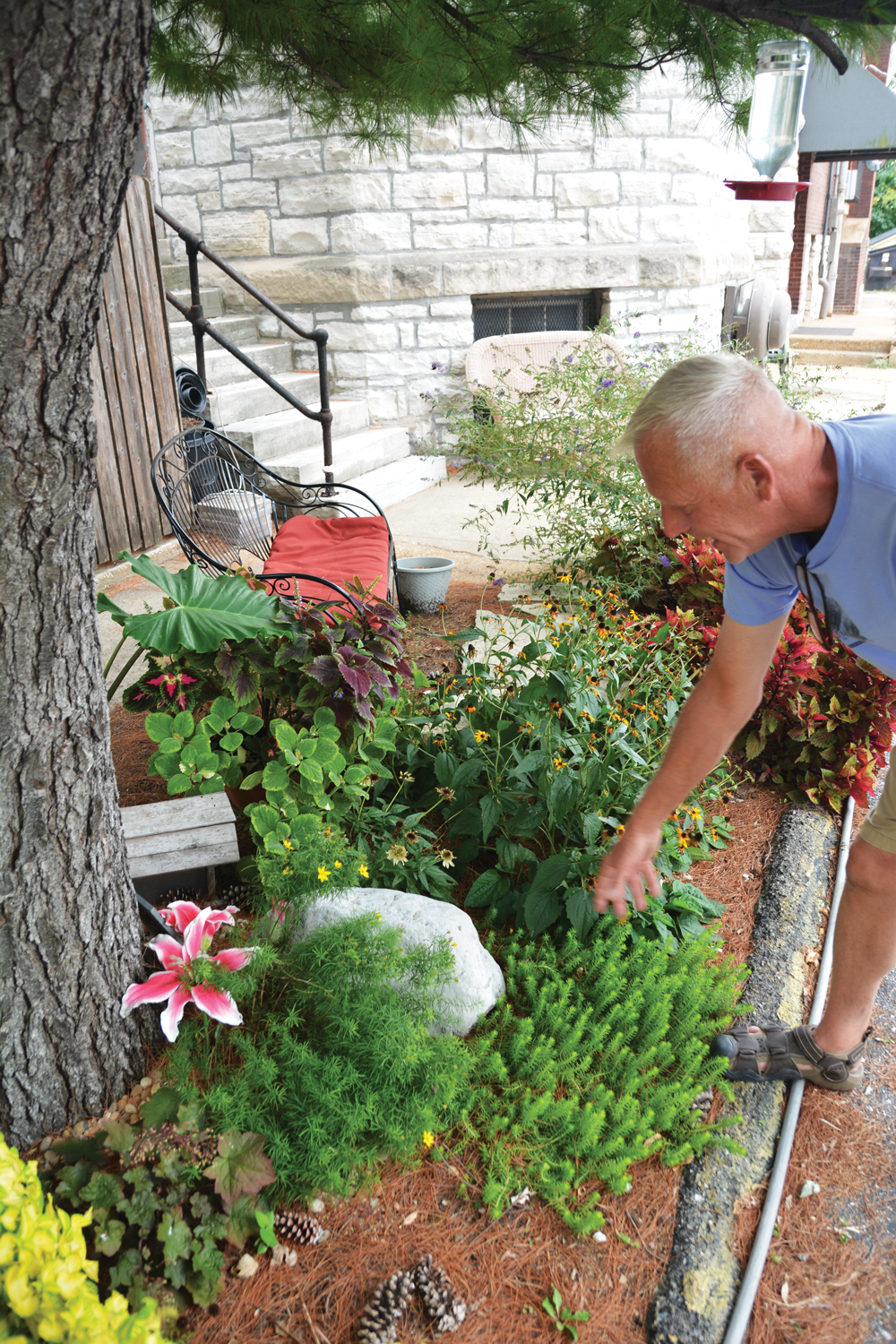 Plants are a passion for Grove.

“Some people like to buy shoes or cars, I buy plants,” he said. This isn’t Grove’s first major garden project. He has transformed public spaces in his Soulard neighborhood into award-winning gardens. After spending years working in those areas, he moved on.

“That brought me to the place where I could focus here,” he said.

There used to be a mansion in what is now an empty lot next to the church. The steps that used to lead to the front door now went nowhere. The top step was in bad shape, so Groves removed it, added potting soil and flowers.

“I thought I’d bring some dignity back to the old staircase,” he said.

His friend Nadine, a restaurant owner in Soulard, had a fountain she was saving for “the perfect place.” Groves knew that might take a while, so he borrowed it for the church until she decided where she wanted it. When he texted a picture of it to her, she said she thought it had found its perfect place. It was dedicated to an employee of Nadine’s who recently died from cancer.

Although several plants are dedicated to someone who has passed, it’s not a memorial garden in the traditional sense. “You don’t have to be dead to get into this garden,” he said. “Anyone can dedicate something to celebrate life or love.”

Grove brought chairs from his second floor patio at home to put near the fountain.

“It’s cool to drive by and see people sitting here and have no idea who they are,” he said.

Donating his own chairs to the garden shows a bit of restoration in Grove’s faith in humanity. Earlier, when a small picnic table showed up in the first part of the garden he was working in, he wasn’t happy about it. He was concerned it would be a place where people would sit, drink and leave trash. But it hasn’t been a problem. So far there’s been no theft or vandalism in the garden area. Quite the opposite; People have added instead of taking away, giving things like bird baths, a wrought iron gate and gazing balls.

“When people see you doing something that they like, they want to contribute,” he said.

Wilder said the neighbors love how the church has improved the look of the block.

“It’s been a way of showing our neighbors radical hospitality,” she said.

Grove’s passion is plants, but he’s a plumber by trade, and is good at fixing things. He’s also a visionary. That combination makes him a valuable church member.

One morning in church, Wilder’s son announced the youth group was going to do a yasta (youth pasta) event to raise money to have the bowling alley restored. Grove was shocked.

“I’m kind of nosey and thought I’d seen everything in the church,” he said.

He asked the person in the pew next to him and was told that yes, there’s a bowling alley in the basement behind a closed door. Grove started asking around and heard discouraging stories that parts had been cannibalized off of one lane to fix another one down the line until the last working lane stopped working and there were no more parts. 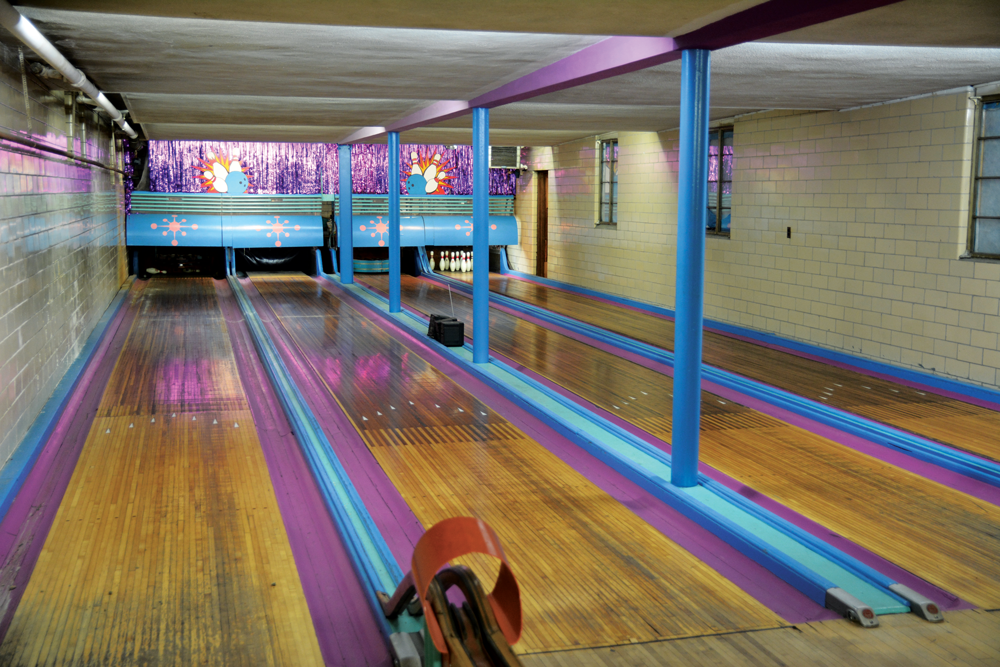 “That really wasn’t the case,” he said. “Everything was there.” He went to work replacing belts and oil and doing some repairs and general maintenance. Soon he had all the lanes operational and called in an artist friend to give the forgotten alley an overdue makeover.

The $750 the youth group raised for the restoration helped along the way. Now, the bowling alley is available for rental for parties and special groups.

Grove’s ingenuity has also spilled over into worship, at first by building boxes to adjust the lighting, but he also made it snow in the sanctuary during the Christmas Eve service. He wanted to do this as a surprise for the pastor but was nervous. Was it too Disney? Too theatrical? Could you do something in one of the biggest worship services of the year without telling the pastor and not make her really mad? He consulted with his friend, an Episcopal priest.

“He told me you can never be too theatrical in worship,” he said. “He also advised that I should just tell pastor Kathleen to expect the unexpected, and enjoy the moment.”

He did so, with those exact words. He also made sure he got it right and did multiple test runs with his squirrel cage fan and florist department snow concealed in the ceiling until he got the rate of snowfall just right. He released it during the second verse of silent night on Christmas Eve. It came off just right. Grove was still nervous, but he needn’t be.

“She was overwhelmed,” he said.

“My sermon was about losing the ‘awe’ of the season and how Christmas should be an awesome experience,” Wilder said.

“When the snow started falling in the sanctuary, it was just beautiful.”

Groves hopes that doing exceptional things will contribute to the overall health of the church.

“Maybe the word will get out that “Hey, that’s the church that makes it snow inside,” he said. “It’s good to do things to add life to tradition, so it doesn’t get boring. Whatever it takes to bring people in the door.”
News