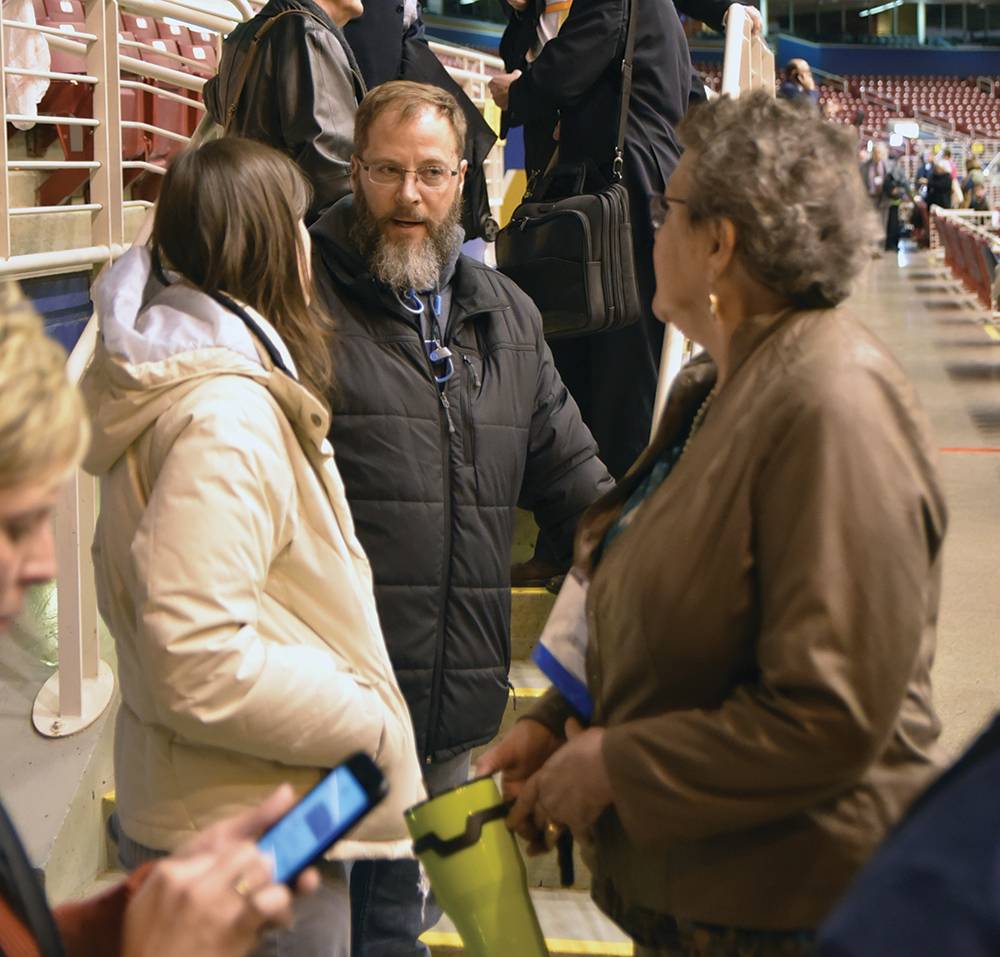 Rev. Jeff Baker was at General Conference in St. Louis to help out. “I was just there to run errands for Kim (Jenne) or Heather (Birge), and help out wherever they needed me,” said Baker, Missouri Conference Director of Next Generation Ministries.

He was needed but not in the way anyone had anticipated. He was in the volunteer refreshment area on Monday morning getting a cup of coffee when he heard something behind him and turned to see a man collapsed on the floor. Baker tends to be predisposed toward action, and he immediately told a fellow volunteer to call 911 and started to administer first aid.

He rolled the man onto his side and found him to be non-responsive, but clearly breathing, so he then rolled him onto his back while supporting his head. Then the man stopped breathing, so Baker started CPR.

The first responder on staff with the Dome arrived on the scene with an automatic defibrillator. Baker worked with her to set it up and administer some shocks. The victim then opened his eyes, said he was fine, and attempted to sit up.

“He didn’t realize what was going on, and I had to tell him to take it easy,” Baker said.

The responder from the Dome then got the man onto a stretcher and took him down the elevator to meet an ambulance.

The man received bypass surgery the next day. At the end of the week, he called Baker to express his appreciation.

As of press time, the man was still in the hospital in St. Louis but was recovering well from another bypass surgery.

It had been a few years since Baker had CPR training, but only a few weeks prior his wife had participated in CPR training at her office, and they discussed it afterwards.

“I think that really helped, just having it fresh in my mind,” Baker said.

It was the second time Baker had performed CPR in a life-saving attempt. The first was on his grandfather, Christmas Eve, 1995. His grandfather didn’t make it. Memories of that experience came flooding back to him as he was performing CPR at General Conference.

“I was looking at this guy thinking, ‘You’re not going to die,’” Baker said. “I wasn’t going to go 0 for 2. I’ll do this all day long until someone gets here.”

Later the man told Baker that his volunteer shift didn’t start that morning until 11 a.m., but he decided to come over 8 a.m. and have breakfast.

“If he had been alone in his hotel room when this happened …” Baker said.

Not only was the victim fortunate to go down by someone who immediately took action, the Dome was a good place to be for other reasons. A group from Illinois told Baker they saw what was happening and all of them stopped and prayed over the incident while it was going on. And later in the day one of the Bishops called for prayer for the person from the floor of General Conference.