The Ship is my Parish 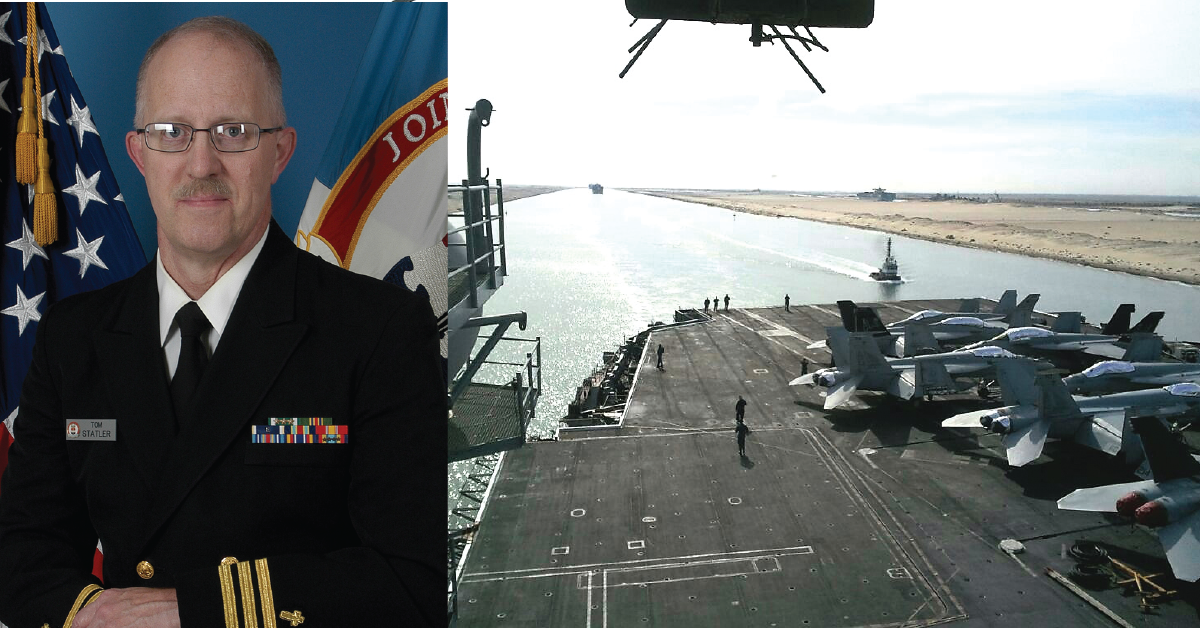 One thing Commander Tom Statler appreciates about serving in his role as Navy chaplain is that it is very people centric. He’s not attached to a chapel. When the troops that he ministers to deploy, he deploys with them.

While in the Navy, duty has called him to the Persian Gulf, Philippines, Bahrain, Dubai, Spain, Greece and France. At times he would go about a month at sea without touching dry land. Deployments are often six months out, two months back home and then another four months out.

“When people are gone from their family 10 months out of the year, there are a lot of relationship issues,” he said. “Chaplains are their support. They need someone who can listen to them effectively.”

Statler’s congregation is a far different demographic than most.

“The majority are age 18–25, and they are coming to us with issues most pastors never touch from young men like that in a local parish,” Statler said. “They are dealing with Dear John letters, getting dumped via email or Facebook. Many are sharing with us a history of being victims of abuse. We hear it all. Whenever we’re out walking around on the ship, they come to us with these things.”

Statler is the son of Jerry Statler, a United Methodist elder who retired in 1991. He’s also Southwest District Superintendent Mark Statler’s brother. Tom didn’t aspire to be a pastor when he was young, though. He went to college and got a teaching degree. But his job search led him to a parochial school. Teaching there became youth ministry, which led to his call to ministry as a vocation.

“My call was a slow revelation for me,” he said.

While attending Perkins School of Theology, the seminarians were approached by recruiters from the Army, Navy and Air Force. Statler was interested, but it didn’t seem like a good fit for his family at that time.

He went on to be ordained a elder and served First UMC Puxico, Senath and Midway Locust Grove. But in December of 1999 he received a flier in the mail, promoting being a chaplain in the Navy. He returned a business reply card for more information.

Later that month he received a call from a Navy recruiter in St. Louis. The recruiter asked him his height and weight and when he could come down to St. Louis for his physical.

With things suddenly moving quickly, he talked to his District Superintendent, James Powell, who referred him to the chaplaincy office at the General Board of Higher Education Ministry in Nashville. There he learned that he might be good to go with the Navy, but it wasn’t their decision.

“The military doesn’t make the call as to whether you are ready to be a chaplain. The denomination does,” Statler said. So he went through the program at GBHEM and received his chaplaincy endorsement in May, and immediately entered the Navy. He went to the Navy chaplaincy school and officer indoctrination in New Port, Rhode Island, and then moved his family to California.

His first tour was at 29 Palms in California as part of the Marine Corps. The Marines don’t have their own chaplains, they use Navy Chaplains. He continued his service through a string of two or three year enlistments. He has now been a Navy Chaplain for 17 years.

“I knew from the beginning I was in for the long haul. I wasn’t just trying it out,” Statler said.

His long haul started later in life than it does for most people in the military. Statler joined the Navy at age 40.

Chaplains are like dentists, doctors or lawyers: They enter the military without the boot camp experience. But as staff corps, they do learn to march and drill, and have to maintain the same age-based physical fitness standards as the other people serving in their branch of the military. When Statler was first assigned to the Marines at 29 Palms, he found himself on a nine mile march with them out in the desert on his first week.

As a chaplain, most of the time one of his primary duties has been to offer spiritual guidance and pastoral care. He did a sea tour on the Eisenhower, a ship with 3,200. There were three chaplains on the ship, so that’s about 1,000 people per chaplain.

There are also the Red Cross messages, informing soldiers of the death of a close family member back home. The chaplain accompanies the naval officer who delivers the message.

A big difference between being a chaplain and being at a local parish is working with people from a wide variety of religions.

“We see every person who comes through the door as a child of God. We call it caring for all. It doesn’t matter what religion they are or whether they are religious or not,” he said. “I try to help people connect their head and their heart.”

Statler is eligible to retire in three years. His wife is working part-time at a United Methodist Church in Norfolk, Virginia.

“Lord willing, I’d like to come back to Missouri to pastor a local church there,” he said.