The Man With Many Hats 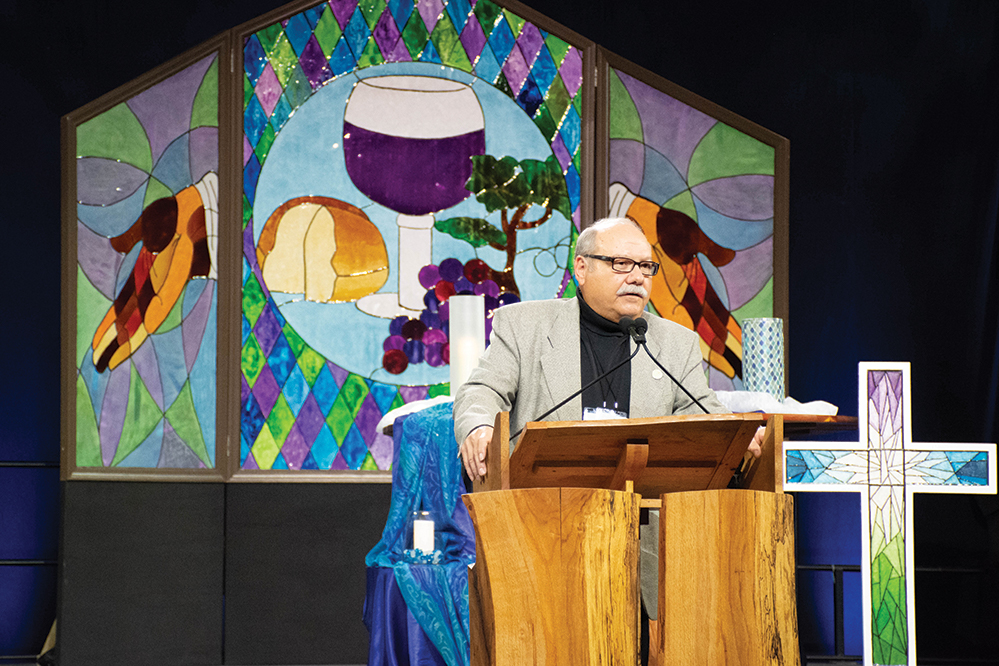 It’s the kind of the morning only a few are willing to venture into when the brisk February air is blowing you back into your warm bed. The aroma of coffee surrounds you like a blanket when you finally arrive as people simply nod to say good morning, knowing well the unsaid rule to wait just a little longer before being consumed by the chaos of the day. Following the twists and turns of the hallways at the Dome is a large conference room with merely three people, spread around table, quietly reading. Their sporadic discussion involves grammatical errors, mistakes and edits, for this is no ordinary book club; their responsibilities are far more important. This is the daily meeting of the General Conference Journal Committee, led by Missouri’s very own Randy Biggerstaff. Most known for his “Good Morning, Vietnam-inspired” greeting while on stage at General Conference, there is much more to this job than the minute-long report he gave on Tuesday morning.

The Daily Christian Advocate captures each General Conference in a single document, spelling out the legislation, proposals and petitions that are covered; transcriptions of exactly what is said; and recognition of the delegates that are representing their conferences. An advanced copy is mailed to delegates and reserves, so they are knowledgeable and ready to discuss matters, but Biggerstaff and his committee have the duty each morning to read over and edit the daily edition that covers the events from the day before. As chair of the committee, he then has the opportunity to make a morning report to the General Conference that all corrections will be printed in the erratum in the coming issue. Typically, appointments to committees are only for one General Conference session, but because of the called special session, Biggerstaff served in this role in Portland, Oregon, and St. Louis.

Chair of the General Conference Journal Committee isn’t the most glamorous job, but it is only one of the many hats that Biggerstaff wears. At General Conference he has served as a Missouri lay delegate for 16 years and chair of the journal committee for the 2016 and 2019 sessions. In his professional career he is an athletic trainer at Lindenwood University for the baseball and men’s soccer teams. He has also worked as program director, head athletic trainer, and department chair. In his personal life he is a husband, father of two and grandfather to four. And if that wasn’t enough, he serves on the Board of Directors for the United Methodist Publishing House, on Missouri’s Mission Council, as a district lay leader, and lay speaker at Bethel United Methodist Church.

Biggerstaff’s faithfulness to the church is reflected not by the many things that he does but rather through the thoughtfulness and intentionality he puts into everything. After his time at the 2019 General Conference session, he reflected on the differences he experienced now being from the host state compared to the four other sessions he has attended.

“As a delegate, we never forget who we represent back home, but you can feel disconnected or anonymous in this larger body as the General Conference. But being in Missouri, I realized how real it is and felt more connected to how this decision will impact the local church,” Biggerstaff said.

During the 2019 General Conference session, Biggerstaff represented the Missouri Conference through his radical hospitality, prayerful deliberation and keen editing eye while wearing his many hats as Missourian, delegate and chair of the journal committee.