Stepping Out in Faith 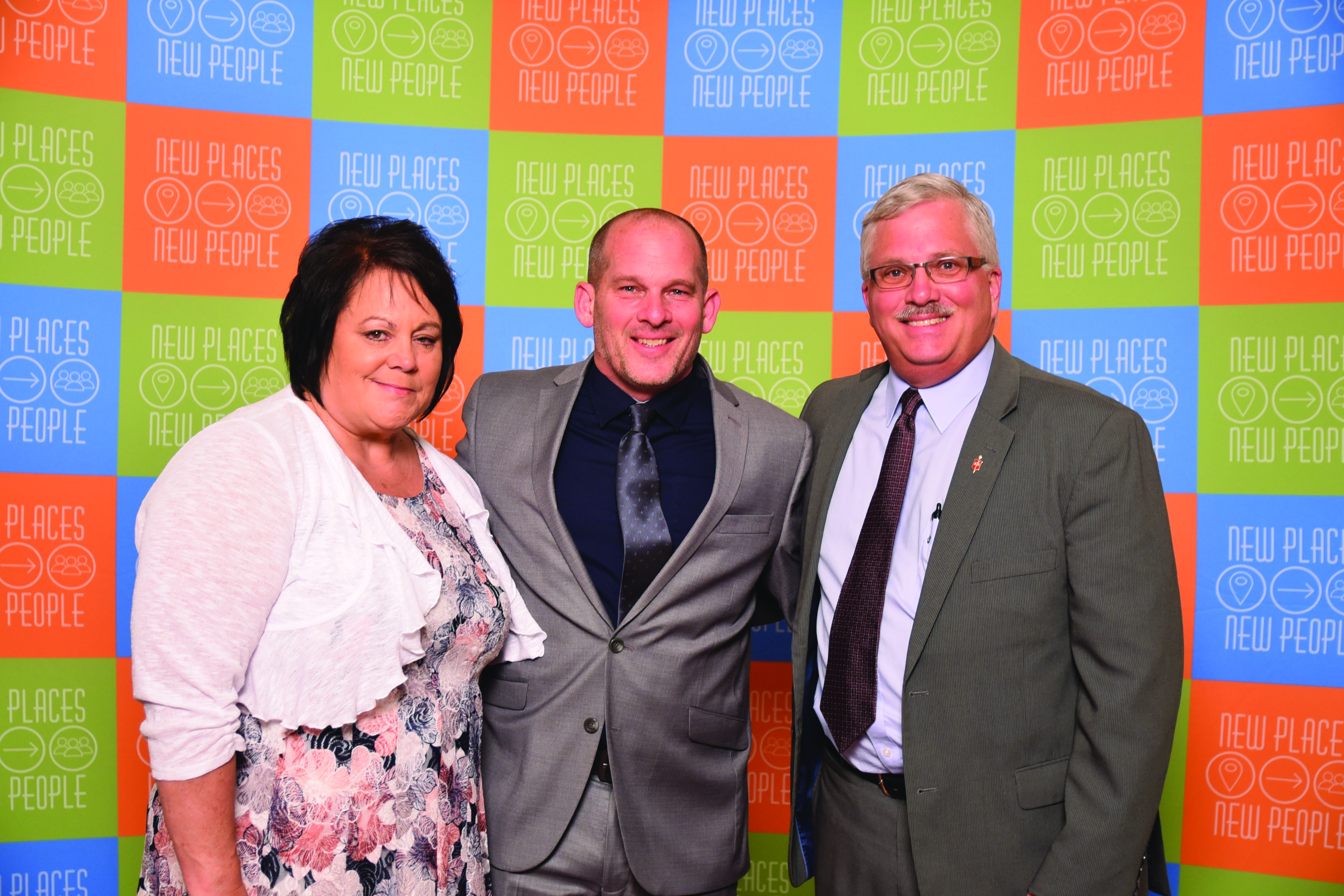 It takes faith to push forward and try something new. For the people being honored at the Missouri Conference Award banquet on April 10, having the faith to take that initiative yielded great fruit toward their purpose of making disciples.

“We’re celebrating individuals who have given of themselves in a special way,” said Rev. Cody Collier, special assistant to the bishop, as the evening kicked-off.

For the third year, people being honored with annual awards were recognized at a special event, held this year at the Country Club of Missouri. Bishop Bob Farr added that all steps forward in ministry are a group effort.

“These leaders have done great work, and behind each of them were a whole group of people working to make a difference in the kingdom,” he said.

Marble Mission Award
The first award presented was the Robert and Martha Marble Mission Award to Mary Ann Sander. Mary Ann, with her husband, Tony, were one of the first couples who attended the first Walk to Emmaus, when Rev. Brent Mustoe was pastor. He introduced the Walk to Emmaus in the (then) Missouri East conference. Mary Ann did each of the roles involved in team service and served on the Emmaus Board for many years. She has also had a lifetime of experience in mission. “We were blessed to have Rev. Cleo Kottwitz introduce us to organizations like Heifer Project International and Habitat for Humanity,” Sander said in accepting her award.

Her passion for mission took her to Haiti and Peru, but she is also engaged in mission close to home. Her church, Centralia UMC, has a school supply giveaway that is held each August in preparation for the beginning of school. They supply about 130 students, from kindergarten through high school. Sanders keeps supplies year-round, and the families in her community know that they can come to church throughout the year if children are in need of them.

For more than 10 years she has headed up the Free Café at her church. This takes place the last Wednesday of the month, every month. She plans, purchases food, and with other volunteers, prepares the meals. It is fully supported by donations, no money is requested or expected. Extra food is sent home with those needing it, often supplying meals for a few days. There is even a service for those who cannot get out to have food delivered to their homes.

Sanders has been a co-leader in an annual coat giveaway project, which coincides with her church’s garage sale. There are normally over 120 coats given away each year, from infant to adult.

Unity Award
The second award presented was the Unity Award, which celebrates the spirit and work of an individual in light of the values of the Conference with particular emphasis on inclusiveness, justice and worth. The award was presented to Rev. Dr. Lydia Pavlovna Istomina of Francis Street First UMC in St. Joseph.

“Rev. Dr. Pavlovna Istomina believes that the tapestry of American culture is not complete without including the stories of everyone, especially the marginalized,” said Director of Mission, Service and Justice Tina Harris.

“Working with diverse communities, she applies the principles of the Shalom Community and lays the groundwork for spiritual, economic and social change.”

Istomina started reaching out to Slavic speaking immigrants in October 2017. Since that first gathering, she has hosted several opportunities for this diverse group to fellowship and serve together. These events have been a bright light of inclusiveness in a dreary atmosphere of division.

Over the past year, Istomina led her church to participate in the Conference priorities by partnering with a local elementary school. This partnership offers ESL classes for the students and created connection between the church and the students’ families.

In addition, Istomina held a “Keep Families Together” worship service in conjunction with The Immigration Alliance.

Approximately 200 people participated in this moving worship experience last summer. All faith communities were represented including the Islamic Center. They worshiped and they served through giving. They collected 160 pairs of tennis shoes and sent to the local schools.

Red Bridge has gone “all-in” on reaching new families with children. The church is very intentional about connecting with their weekday child care ministries. Pastors and laity are involved in welcoming and offering opportunities for parents to talk and learn. Red Bridge has designed a regular family-oriented worship experience called Messy Church, the focus of one of the New Places for New People videos debuting at Missouri Annual Conference 2019, in order to better connect with families in their community. The general focus of including and resourcing young families led these families who had not been involved in church to join with the Red Bridge faith community.

Denman Award – Laity Recipient
The Harry Denman Evangelism Award honors one lay and one clergy for their exceptional ministry of evangelism - expressed in Word (what), Sign (why) and Deed (how) – that brings people into a life-transforming relationship with Jesus Christ.

Mitch Buhman was the laity recipient of this year’s award. Director of Congregational Excellence Roger Ross introduced him as a high energy, self-starter with a passion for showing people that they are loved by Christ, not just telling them.

“He has always found joy in serving others, and this year, he had the opportunity to take the lead in starting a new site of his home church,” Ross said. “He could hardly wait to see what God could do with his energy and passion to serve those with a spiritual need.”

Kearney was growing on the west side of town. Buhman gathered a team of 20 energetic, Christ-filled leaders from the originating congregation and formed them into teams to design and lead various parts of a brand-new service. This new service would meet in a school gymnasium with a casual yet intimate atmosphere where everyone can be fully known and fully loved.

The new site launched on December 2, 2018. So far in 2019, they have had 16 baptisms, formed three small groups, and welcomed and engaged in worship with over 100 new people. The site has an average worship attendance of 175.

Everyone has an opportunity to serve in Sunday morning operations which opens the door for endless opportunities for conversation and ministry. Through relationships being formed and connections be made, those in need are being loved through all sorts of hard life situations: addiction, divorce, death, parenting struggles. Their ministry has an amazing ability to love and support their new congregation with exceptional hospitality, relationship and prayer, while providing them with an intimate and worshipful Sunday morning experience.

Denman Award – Clergy Recipient
This year’s recipient of the Denman Evangelism Award for Clergy goes to Rev. Tim Schulte. After leaving a 15-year career as a general contractor, Schulte entered ministry as a High School Youth Director at Eureka UMC in 2008. Since then he has served as the Middle School and High School Youth Director and Associate Licensed Local Pastor.

Upon completing his course of study at Garrett Evangelical Theological Seminary he was appointed full-time pastor of Eureka UMC on February 12, 2017. Since his appointment, Eureka has welcomed 69 new members, 25 baptisms, 44 professions of faith and has confirmed over 20 people with 8 currently enrolled in 2019. Upon obtaining his local licensed pastor status in July 2018 he was appointed senior pastor.

Schulte began to serve on the local ski patrol to encounter people outside the walls of the church. In the winter storm of 2010, instead of closing the church due to the large amount of snow, Schulte decided to hold a ski contest in the church parking lot. Through Schulte’s leadership and several volunteers, truckloads of snow were brought to the church and the front entry steps of the sanctuary were turned into a ski ramp. The parking lot was turned into a ski contest area for barrel jumps and other ski tricks. A wood-fire warming station was set up for guests and participants. Coffee and hot chocolate was served to make people feel welcomed. This event hosted over 100 people.

On December 30, 2015 tragedy hit home at Eureka UMC. The region was decimated by torrential rains and most of the local area was submerged in a historic 1000-year flooding event. Schulte personally spent a week responding to the clean up using a Bobcat skid steer. When UMCOR brought disaster relief buckets to the church, Schulte loaded up the church van and spent days delivering these buckets to the local people devastated by the flooding.

Schulte became a founding member of the Eureka Disaster Relief Committee in 2016, and he currently serves as chairman. Because of his selfless desire to reach the lost and hurting members of our society, the Eureka community came to know that Eureka UMC was a focal point of relief and comfort after the 2017 flooding event.

“Tim doesn’t just preach the love of Christ, he becomes the embodiment of Christ to those suffering members of our society surrounding Eureka UMC,” Ross said. “He leads the congregation by personal witness and acts to show that Christ needs us to be His hands and feet to reach a hurting world, if they are to receive His love.”

Schulte’s leadership through the Healthy Church Initiative is leading to new initiatives through Celebrate Recovery, additional worship spaces, a new discipleship pathway, and a “home makeover” of the church’s interior space to be more welcoming.