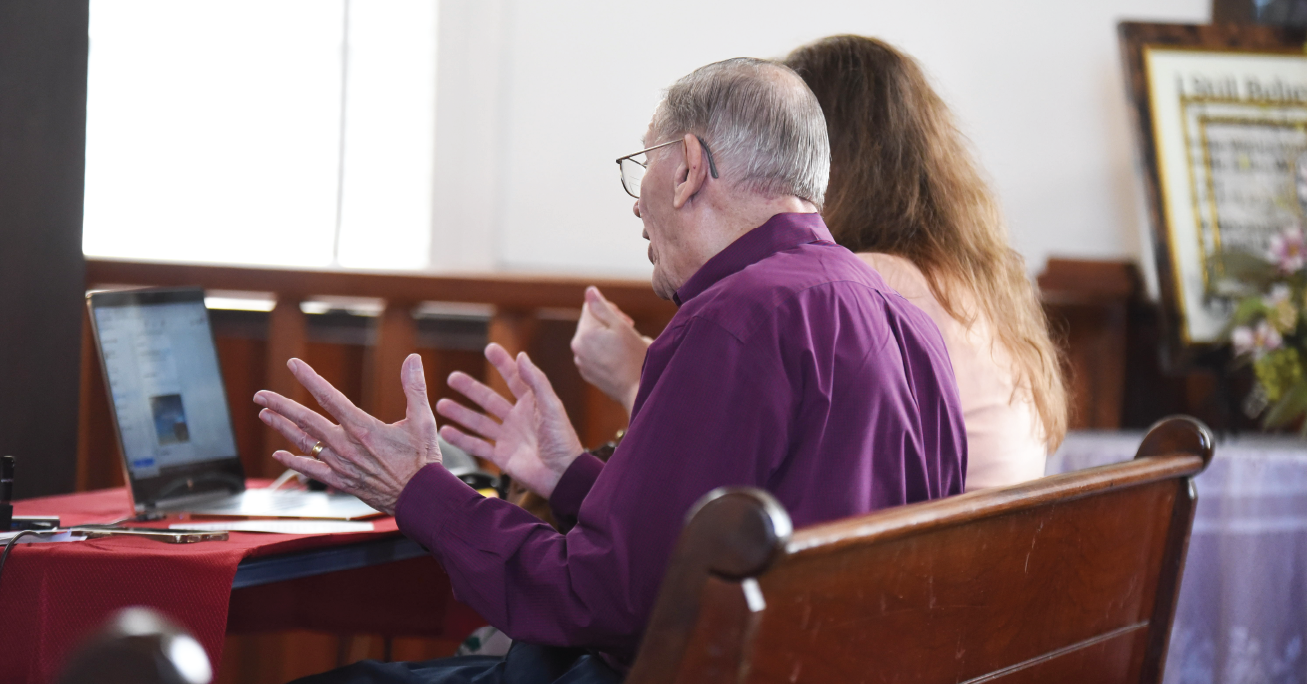 When Rick Matson went back and listened to his January 10 sermon, he discovered something troubling. “Two sentences were unintelligible,” he said.

He sought out a speech therapist, who noted a swelling that had previously been imperceptible to him.

Matson is a certified minister who has been serving as pastor of Prairie Chapel, an open country church near Fulton, since 2013. He also teaches online classes for lay speakers. His last one was in April, when he was having more difficulty with precise articulation.

By Annual Conference time in July, he had a pretty good idea of what he was up against. After eliminating several other possibilities, the diagnosis came down to amyotrophic lateral sclerosis, or ALS, commonly known as Lou Gehrig’s disease, after the professional baseball player contracted the disease in 1939.

“When you get together with friends, what do you want to do? You want to break bread together and to talk,” he said. “It’s a big part of life.”

But Matson remains focused on his blessings, not his losses, and says he’s very grateful that so far, he’s still doing fine from the shoulders down. He still has an impeccable personal appearance, can drive a car, and can type.

That last part is critically important to Matson because although he has lost most of his ability to annunciate clearly, he’s still a preacher at Prairie Chapel. As his symptoms were progressing, Matson used a service-connected to Boston Children’s Hospital to “bank” his voice. He was recorded reading, and his voice was entered into a text-to-voice program. The process was expensive, but Matson’s speech therapist knew of a former New Orleans Saints football player who also has ALS who paid for the process. Matson was only out for a $120 program for his iPad.

The sermons sound like an artificial intelligence version of Matson’s voice. He refers to it as Robo Rick. But for those who know him well, you can certainly hear his voice in it. His voice was there on a week-to-week basis, and he had no way of knowing how long it would hold out. So he was going to persevere as long as he could.

Matson’s methodical and direct approach to dealing with his health issue is no surprise to those who know him. He has a degree in chemical engineering from the South Dakota School of Mines and Technology, a master’s in aerospace engineering from the University of Arizona, and an advanced management degree from the Harvard Business School. He was working at the Pentagon with the rank of Lieutenant Colonel when he retired from the army. He moved to Columbia to be close to his son and used to own and operate a MAACO autobody shop in Columbia.

Matson became a certified lay servant in 1986, district director in 1999, and has served 23 years as district director. He served as supply pastor at Smith Chapel from 2004 to 2010 and served in national leadership with lay servant ministries before going back to being a lay pastor at Prairie Chapel in 2013. He considered ordained ministry, but when he prayed about it, the answer he always got back was that he was called to serve as a layperson.

“For me, it had many advantages. First, I was able to work closely with many pastors,” he said. “I also had the opportunity to influence many people through teaching lay servant classes.”

Matson has confronted tragedy in his life, losing a son at the age of 18. Then, in 2018, Matson lost his wife Rosemary three weeks before their 58th anniversary.

“Rosemary was a full partner in ministry,” Matson said. “She was as important to the congregation as I was standing up front.”

Matson remembers how Rosemary dealt with receiving a grim prognosis of having an aggressive form of cancer. Her attitude was the same when he spoke with her about returning to the pulpit as supply pastor.

“Without hesitation, she said we’ll just do what we can for as long as we can,” he recalled.
After Rosemary passed, he did a couple of sermons on hope. That was intentional.

“I chose to be a person of hope,” he said. “I’m very comfortable there.”

But being a person of hope doesn’t mean denying the reality of his condition. So he’s been training other people in the church to take over aspects of worship, like running the slides.

“I’m going to continue. The congregation deserves having someone as their pastor,” he said. “There will come a time shortly when they will deserve more than I can give them.”

Simply maintaining his health on his own is a challenge with his condition.

“With all of the pills that I’m taking, it’s a full-time job just taking care of myself,” he said. One medication is an infusion that takes an hour, and several others have to be taken at very specific times. It requires planning and precision of execution, something Matson has had a lot of practice in his 80 years. He’s living life into an uncertain future one week at a time, making practical decisions, and choosing to be a person of hope.

“(Earlier in the year) I used to joke and say I hoped I would be able to tell people Merry Christmas,” Matson said. “That isn’t a joke anymore.”