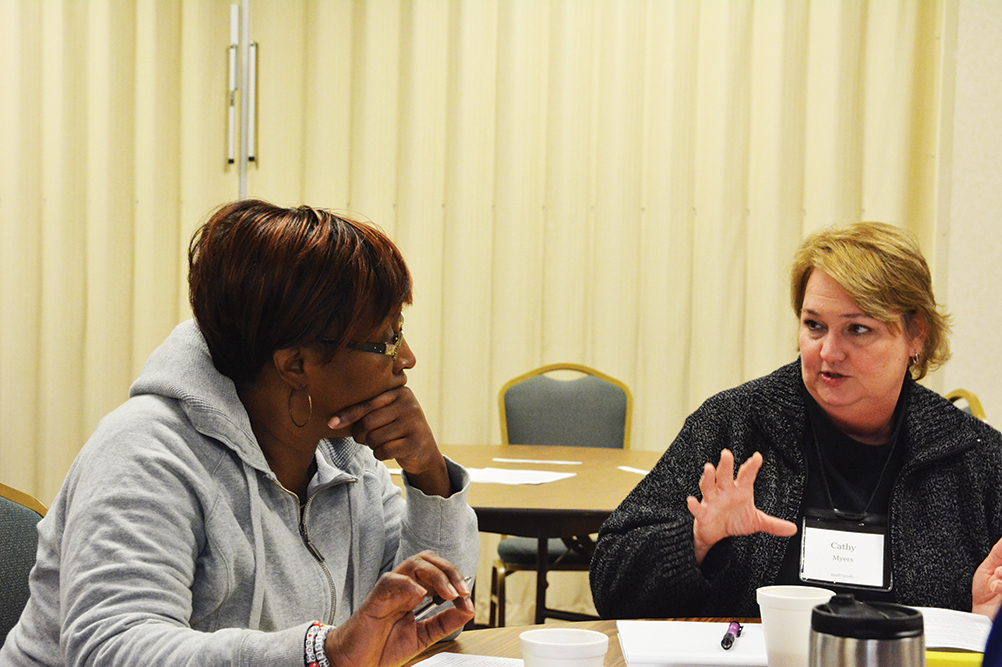 Everyone needs some time apart. Missouri Conference clergy and laity recently came together for conversation and quiet reflections at Soul Friends: a Journey of Holy Conversation and Connection.

The event was held Cross Pointe Camp & Retreat Center, an Assemblies of God owned facility at Rocky Mount on the Lake of the Ozarks. The event was from noon to noon, starting on the first Monday in November. The intent was to deepen and resource spiritual conversation and connections within congregations and the Conference.

“We learned how to share and listen to each other’s faith stories, connect more fully with the presence of Christ, and help others deepen their faith commitments,” said Director of Pastoral Excellence Karen Hayden, the organizer of the event.

Several different contemplative practices were showcased throughout the retreat. On Tuesday morning the retreat began with a process called Praying the Scriptures lead by Julia Goodell of Missouri UMC in Columbia. This process uses scripture to focus minds and open souls to God. Short passages are read several times, followed by a set time (in this case five minutes) of quiet reflection and openness to the voice of God. The scripture used this day was Acts 12: 7 “Suddenly an angel of the Lord appeared and a light shone in the cell. He tapped Peter on the side and work him saying, ‘Get up quickly.’”

Following the process, groups were asked to reflect on their experiences. Rev. Melissa Bailey-Kirk noted that the process felt very invitational to her. “I had no revelations, but good questions,” she said.

Rev. Jackie Asher of Owensville liked the format. “The brevity of the passage helped me focus on it,” she said.

Rev. Linda Pagel of Nevada said she heard great caring and love in the scripture, and it made her think of her children. Goodell said the process is a new way to make use of scripture beyond Bible study.

“Some people don’t know what scripture to use when they start,” she said. “I’ve been doing it for five years at Missouri UMC and we haven’t gotten out of the Psalms. We just pull randomly pull a verse out of a bag.” She also suggested using the daily lectionary, or something from a devotional publication like Alive Now magazine. Rev. Bob Casady of Schweitzer UMC in Springfield had also led a session on Praying with Scripture on the first day of the retreat.

Following Praying the Scriptures on Tuesday, Bailey-Kirk led a session on Clearness Committees, based around the Circles of Trust process developed by the Quakers. The process involves a focus person seeking clarification of an issue, and a clearness committee asking the person open-ended questions, rather than answers, to help the focus person arrive at his or her own conclusions. It also involves a lot of quiet time between questions.

“The pace of the conversation is slow, so you have time to think, ‘Do I need to ask that, or is it part of my hidden agenda?’” Bailey Kirk said. She stressed that the conversations are private, and even anonymous examples from them should not be shared. She also called for double confidentiality, meaning that after the circle meeting is closed, participants should not talk to the focus person later about something that was brought up in the circle.

Bailey Kirk noted that the process involves a lot of spiritual energy, but if carried on too long it can be exhausting. The session the groups did as an example lasted 30 minutes. Some Circles of Trust last two hours. She doesn’t recommend going any longer. “You can’t do this as a marathon,” Bailey-Kirk said.

At the conclusion people were asked to share what gifts the process provided. Rev. Barry Freese of Blue Ridge said the outlined boundaries of the questions were a gift to him. Pagel said she found a gift in people listening, not trying to fix someone else’s problems. Bailey-Kirk asked people to name some of the good open-ended questions they heard. Some responses were: Why now? How long have you been thinking about this? What would a compromise look like? What inspires you about this? Have you experienced something like this before/how is this different? How do you think they are feeling about this? What would be the cost of making no decision?

Baily Kirk said one good thing about the clearness committee is that everyone in the group is actively discerning. Some people reported that they found it difficult to ask open-ended questions, and to avoid giving advice. Baily Kirk reminded that group that it is a discernment process, not a problem solving process.

Rev. Jenn Klein of Country Club UMC (Heartland District) closed the event with worship and the sacrament of communion. There will be similar Soul Friends regional events in the spring, open to laity and clergy, with date and location to be announced later.