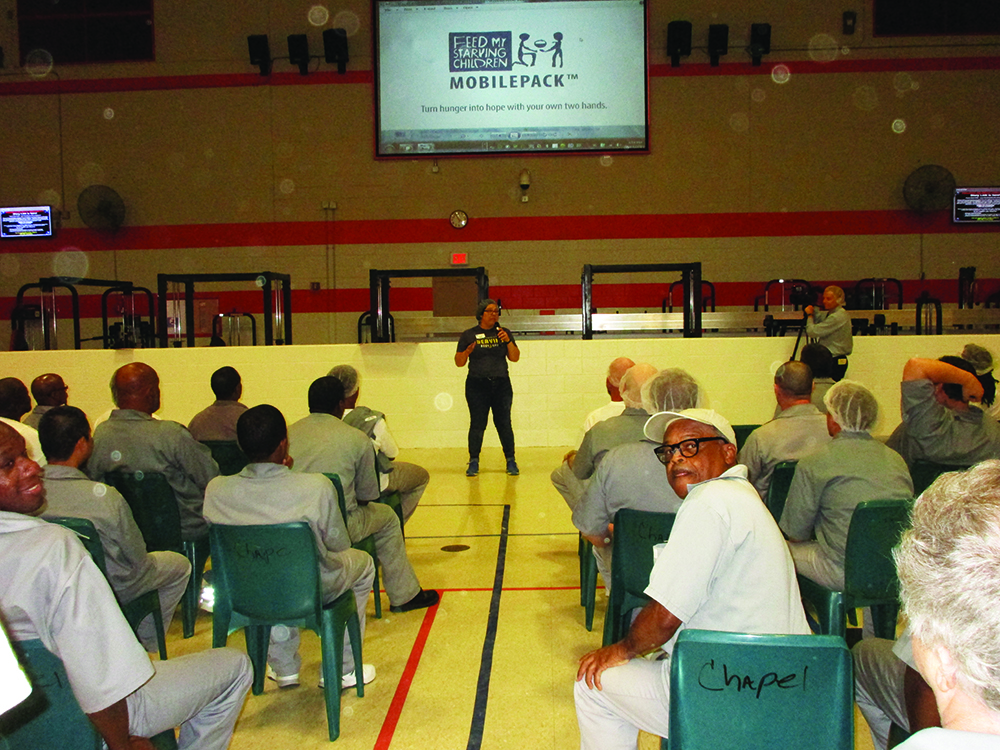 April 16 was a monumental and historical day for the Southeast Correctional Center, Cape Girardeau’s La Croix United Methodist Church and the Missouri Department of Corrections. On the Wednesday before Easter, 159 offenders, 19 SECC staff members, 12 members of La Croix’s Prison Ministry, Rev. Ron Watts and six La Croix worshipers partnered with Feed My Starving Children to pack 163,296 meals which is enough to feed over 440 Haitian children one meal each day for the next year. This was the first FMSC MobilePack™ ever held in a Missouri prison and the largest number of meals ever packed behind prison walls at one event.

Feed My Starving Children is a Christian nonprofit organization founded in 1987 and now partners with churches, community organizations, corporations and prisons, relying upon more than one million volunteers to raise money and pack more than 360 million meals annually, which are shipped to partners worldwide. FMSC distributes meals to more than 70 countries. FMSC began partnering with correctional facilities in 2012 and by the end of the current calendar year, more than 1.5 million meals will have been collectively packed behind prison walls in Minnesota, Wisconsin, Illinois, Mississippi and Missouri, with more events being planned.

La Croix UMC began its relationship with FMSC in 2009 and has hosted an annual MobilePack each December since that initial venture. La Croix’s members and local volunteers have funded and packed more than seven million meals over the course of their partnership with FMSC. During the 2016 MobilePack, FMSC staff members approached the La Croix Prison Ministry Team about hosting a pack at SECC in Charleston. While the team was intrigued with the opportunity, the timing was not opportune.

After helping establish a connection between the Marshall County Correctional Facility in Holly Springs, Mississippi. and FMSC in 2017, three La Croix members participated in MCCF’s first MobilePack in March 2018. Their positive experiences at MCCF stimulated the drafting of a proposal that was presented to the SECC executive staff in August 2018. The proposal was approved contingent upon four offender-based organizations raising $11,000 in six months to help fund the meals. The organization’s leaders enthusiastically committed, the April 16 date was agreed upon, and the fundraising and planning began.

While the participating offender organizations launched fundraisers, prison officials and FMSC staff members Carrie Wiggins, Kimberly Bikulcius and Danny Pyne worked out necessary adjustments needed to complete the pack and comply with institutional security needs. Also, during that time period, FMSC established a funding page which resulted in two sizeable donations covering a little more than one-third of the costs of the meals. La Croix’s contribution, the funding page donations and the $11,000 raised by the offenders meant the project had the necessary funding to become a reality. The excitement and energy grew.

At 6 a.m. on April 16 FMSC’s seven-member team, members from La Croix’s Prison Ministry and the participating offenders met at the prison’s gym to unload equipment, assemble packing stations, label bags and prepare shipping boxes before the packing officially began. Music played, acquaintances were made and the presence of the Holy Spirit was evident. After a few announcements and a presentation, the packing began. There were two, three-hour shifts, more than 200 participants and 163,296 meals were packed. Mid-day inmate count and lunch schedules were maintained. By 6 p.m. that same day, the meals were packed, the pallets of meals were loaded onto a tractor trailer, the stations were dissembled, the equipment was packed and loaded for the next FMSC event, and everyone was physically tired but emotionally overjoyed and spiritually fulfilled from the day’s accomplishment. The presence of the Holy Spirit was still strong.

The most obvious accomplishment of the day was the truckload of packed meals that left the camp headed for Haiti to help children eat a nutritional meal for the next year. Participants neither knew or would likely ever meet the children they served. It was an accomplishment that everyone who contributed could feel proud about.

A number of other benefits were readily identifiable. First, the participating offenders grew personally, professionally, emotionally and spiritually. This is what Maslow referred to as self-actualization. They were a part of something much bigger than themselves. They raised money, some gave up a day’s work and wages, to serve under and malnourished children without promises of material reward. They worked harmoniously, as a team, with others to achieve a common goal. They broke the commonly held stereotype that prison inmates are self-absorbed. The men now see themselves as world changers, having value and making a difference.

As for the prison’s take on the pack, Warden Jason Lewis said "It's extremely rare that a moment such as this is captured, documented and shared in its truest form. The comradery, the excitement and the hard work by offenders, volunteers and SECC team members all serve as testimony to our facility's heart for service. Bring on more packing events, we loved it!"

Secondly, offenders enjoyed a sense of freedom that isn’t always visible in correctional facilities. Paul tells us “… where the Spirit of the Lord is, there is Freedom,” (2 Corinthians 3:17.) The Spirit of the Lord was present in the days building up to the MobilePack, throughout the day of the pack, and days and even weeks later. One participant said “This was the best day of my life.” Another asked, “When can we do this again?” Participating offenders felt a sense of freedom and hope from serving that most offenders don’t feel. One of the younger offenders said it best, “For most of us, this is what redemption looks like.”

In Romans 12:16 Paul encourages us to “Live in harmony with one another … ” Prisons are seldom described as harmonious. The inmate culture is frequently characterized as being individualistic, racially divided and holding many contrasting values to staff and contemporary society. The day of the SECC MobilePack we were united, one together, laughing, singing and serving as God’s hands and feet. The unity generated from packing the meals was best described by an inmate who shared, “On that day there were no uniforms, no cliques, no denominations, no skin color, no differences. We were one, servants.”

The Spirit continues to move within SECC and outside its walls. Two days after the pack, April 18, Katie Koranda, a member of the FMSC team, posted a story on a FMSC blog describing the pack and its impact on the participants. An anonymous donor was moved by the article and donated generously for future correctional center MobilePack events. Before the excitement from the first pack could peak, it rose even higher. On October 2, 2019, the tri-partnership of SECC, La Croix and FMSC will hold another MobilePack at the prison. Warden Lewis’s request has been granted.

The October MobilePack will look somewhat different. First, more meals are scheduled to be packed, 202,176. Second, there will be more participants, not necessarily a result of the increased number of meals. Participating staff and offenders are still talking about the April pack and have stimulated participation by sharing their experiences. Third, the fundraising focus is a slightly different. Instead of being centered on funding the SECC event specifically, fundraising is also focused on empowering other prisons and detention centers to host MobilePack events. FMSC has constructed another funding page and contributions have already been received. The offender organizations chose to pay it forward and are also holding fundraisers to contribute to FMSC’s prison initiative.

There are also constants between the two packs:
Globally, children in need will be served.
The participants will have an opportunity to grow.
The Holy Spirit will continue to smother the SECC Gym and fill everyone who comes in unity to serve.

To find out more about Feed My Starving Children see fmsc.org. To help fund future prison and correctional MobilePacks go to www.give.fmsc.org/redemption.