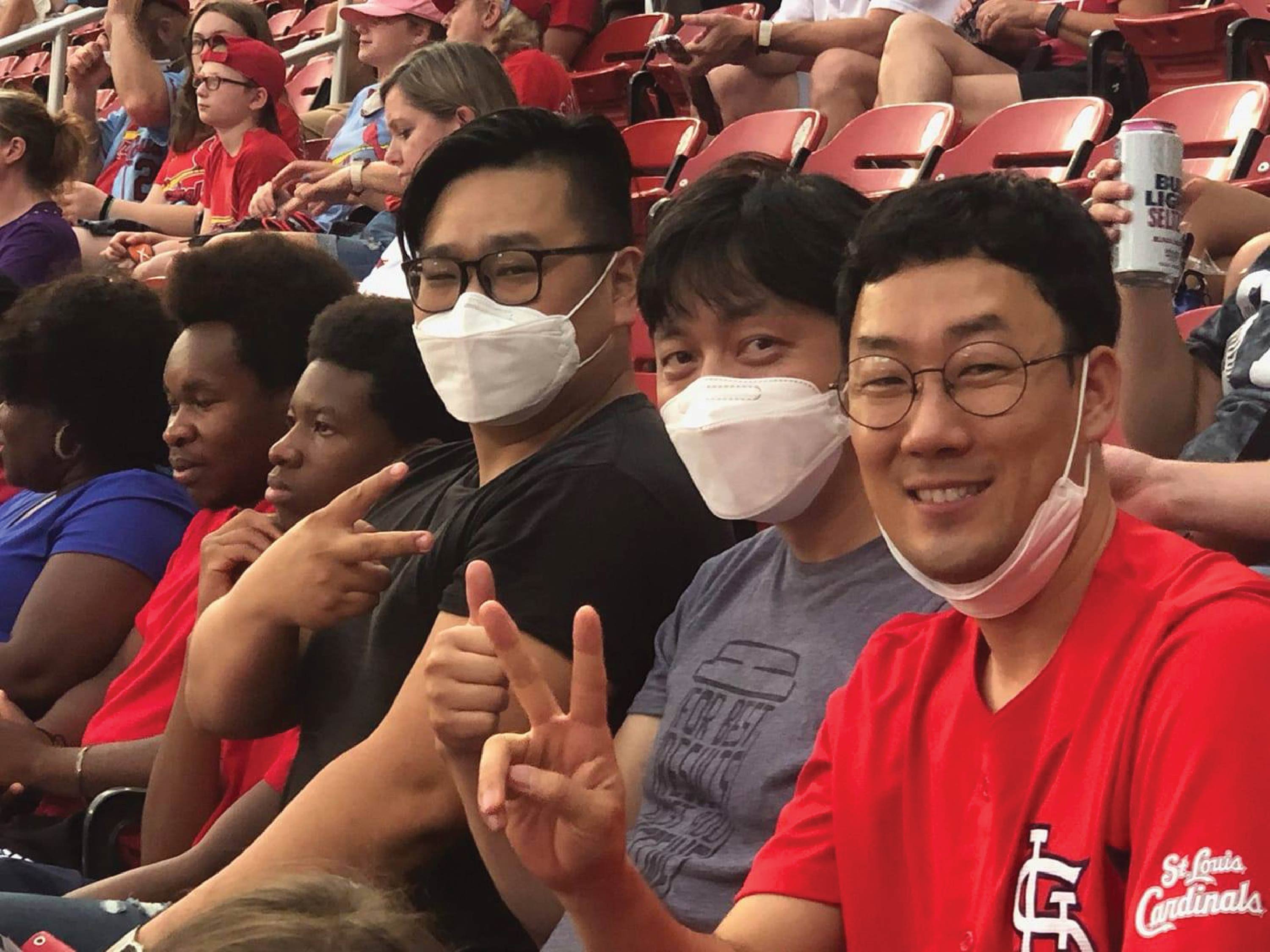 Three pastors serving churches in rural areas of Missouri came here from South Korea, via New Jersey. Small town life in the Midwest is a different lifestyle than they’ve experienced before, and for the most part they will tell you that’s a good thing. 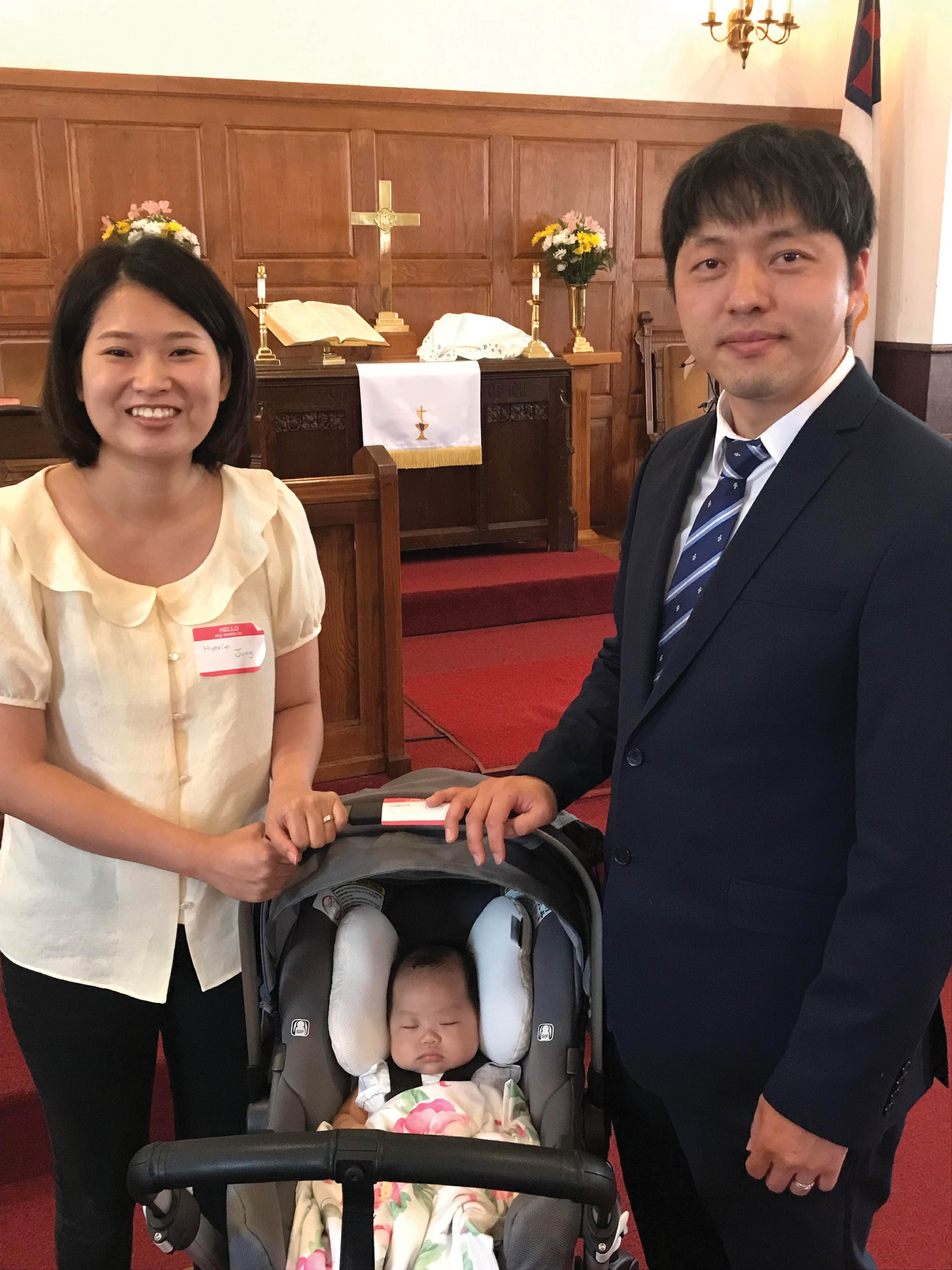 Rev. BeomSeon Hong came to the United States from Korea in 2011 to attend seminary. His father is a pastor, and he hoped to get an appointment in New Jersey. But after a number of years, there were still no appointments available. He spoke to some friends about other locations in the U.S. and sent his availability and willingness to move to selected cities, where either he had friends or there was a Korea Town nearby. He still didn’t come up with anything.

Hong was appointed to Louisiana and Clarksville in July. He lives in Louisiana with his wife, Hyerim Jung, and seven-month-old daughter, Seoah Hong.

“I’m very thankful. One of the best decisions I have ever made was to come here,” Hong said.

“In New Jersey, everything was so competitive. Here I’ve felt a healing in my soul and spirit, and I’ve felt such warmth from our church members.”

Hong was familiar with country life. His father, an itinerant pastor, was appointed to a rural area for a couple of years when he was a child. But he initially worried about his wife, who had always lived in a large city. She told him not to worry.

“She said she is so busy with our baby, it doesn’t really matter where we live,” he said. “And we’ve had church members bring us eggs and vegetables from their garden. My wife had never experienced that, and she loves it.”

The closest Asian market is an hour and a half drive away. Hong goes there a couple of times a month, but finds he can get what his family needs at Wal-Mart. And there are some things he gets in Louisiana that he didn’t get in the city.

“In New Jersey, I didn’t even know the people in the house next door. Here I’m getting to know the whole community,” he said. “They have such a warm heart. I’m very comfortable here.”

Some cultural differences between New Jersey and Missouri have come since Hong’s relocation. He learned that although driving 15 miles per hour over the posted speed limit is acceptable, even encouraged, in New Jersey, in Missouri it is not.

His parents had to adjust to being several thousand miles away from their new grandchild, but Hong does what he can to keep them connected. 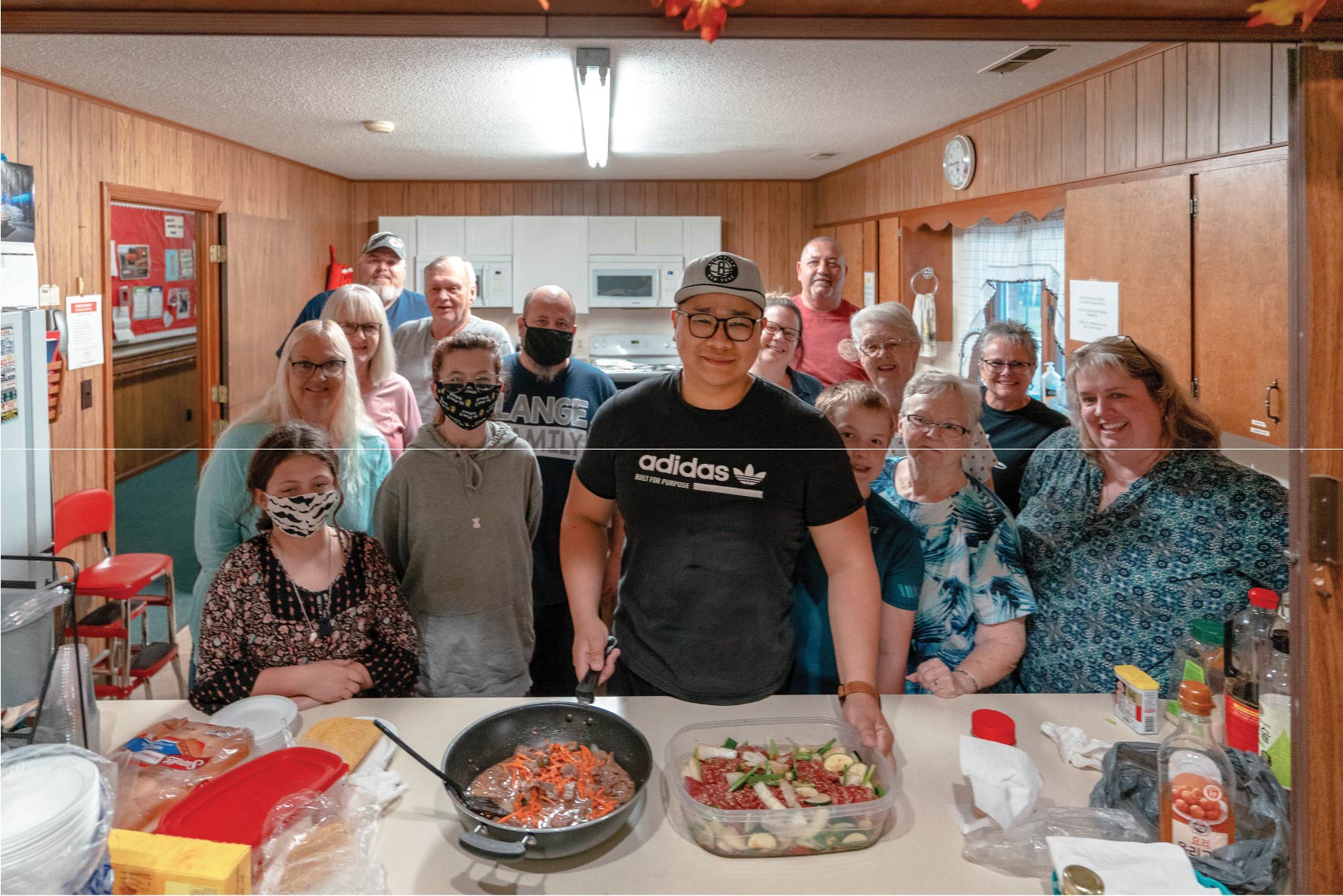 Rev. Jaeho Uhm moved from Hwasong (a suburban area of Seoul) in South Korea to New Jersey in 2013 to attend Drew Seminary.

He finished his Masters of Divinity and started serving Korean Community Church in New Jersey in 2017. From there he went to Monmouth Grace UMC in New Jersey in 2018. After that, he went to Immanuel Korean Methodist Church in Atlanta, Georgia, until June 2021. Like Hong, he sent his resume to all of the conferences in the U.S. That led to him accepting an appointment in the Missouri Conference, at Jefferson Avenue in Moberly.

From there he went to Australia, where he spent a year and a half in varied jobs, including truck driving, stadium cleaning, and working as a sushi chef.

When Uhm was a child his mother served part-time as a pastor but had to stop when her responsibilities as a mother and as a pastor were too much at once.

Although Uhm grew up in an urban area, he helped his father with his factory, which was in a rural area. There he learned how to use shop tools, and gained experience in working with metal and welding.

In New Jersey, he lived in Palisade Park – 40 minutes from downtown Manhattan. Rush hour was difficult. In small-town Missouri, some things are just easier.

In New Jersey, it took all day to get my license renewed,” Uhm said. “Here it took about 15 minutes.”

The hardest part about coming from another country to serve as a pastor in rural Missouri isn’t cultural; it’s bureaucratic. In each case, there were delays and difficulties in obtaining a work visa. It created a lot of stress.

“It took two weeks to get my visa, and for those two weeks I couldn’t sleep,” Uhm said.

All of the pastors in this story have an R1, or religious worker, visa. If they continue to stay and work in the U.S., they will need to apply for a green card.

Uhm doesn’t find rural Missouri and rural South Korea to be all that different. “The roads here are wider,” he said. “There are more cars but fewer people.”

Although he said it’s hard to find an Asian community in Moberly, everyone he has met has been receptive to him.

“People have been very kind and warm-hearted in receiving us,” Uhm said.

Uhm married just before moving to Missouri. Hee Jin Lee, his spouse, is also Korean and is working on her dissertation for her doctorate degree. He says she is so busy with that work, it doesn’t matter where she lives.

Uhm calls his parents about once a week, using FaceTime for video calls.

Uhm worked as a hospital chaplain in New Jersey. That experience of helping people through a time of stress and grief came into play in September, when a church member had a daughter in the hospital, who ended up not making it. Uhm’s hospital visits with the family led up to having the funeral service.

Uhm finds the structure and administration of the United Methodist Church in Missouri to be essentially the same as the Korean Methodist Church he grew up in. In terms of local church services, he finds the biggest difference to be style.

“Korean churches tend to be much more traditional,” he said. “Men wear a suit and tie – no exceptions.” 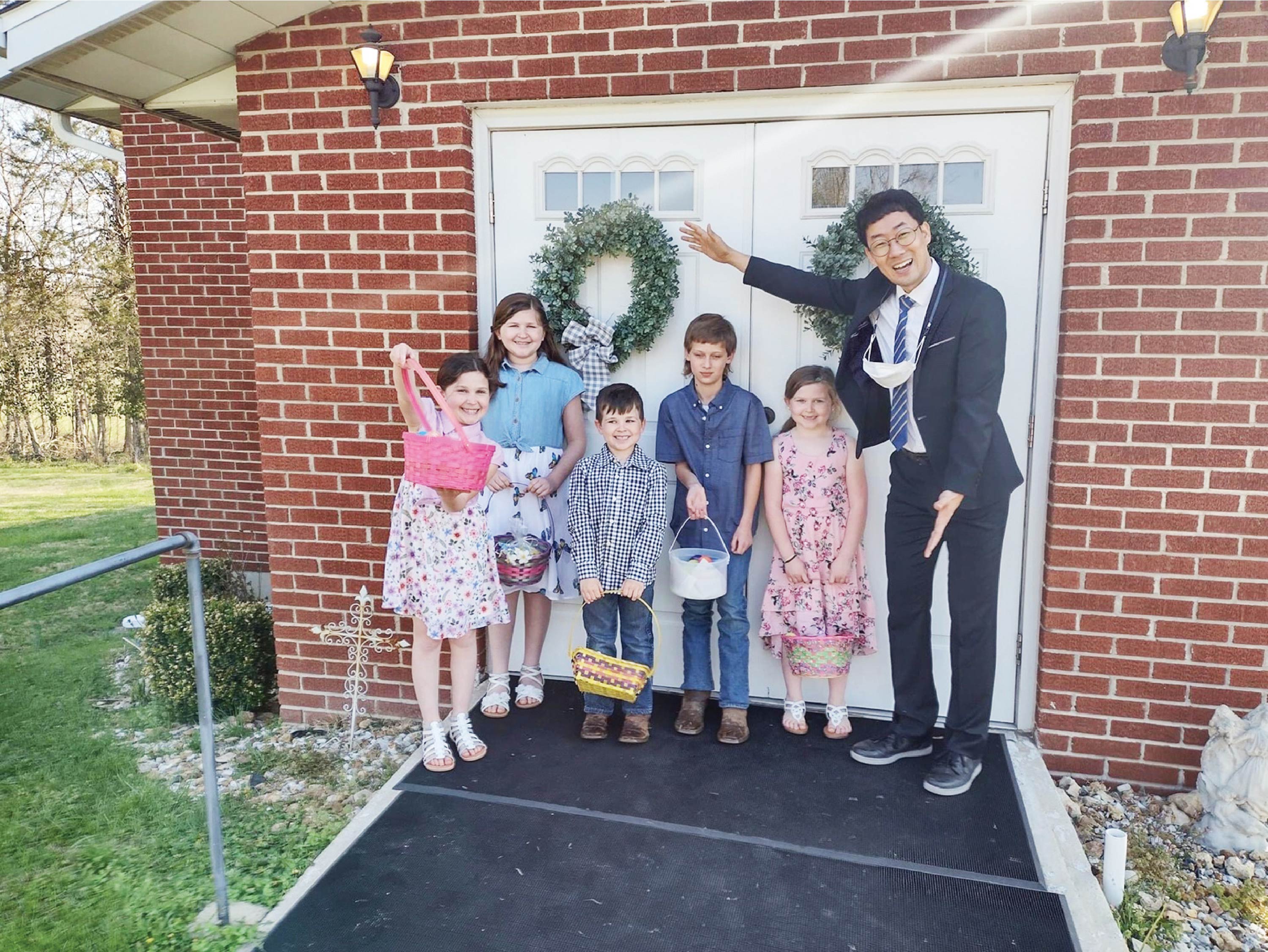 Rev. KeyaRae Yi grew up in Seoul, South Korea. His father is a Methodist pastor and college professor. Yi’s first trip to the U.S. was for a study abroad program with Wesley Theological Seminary in Washington, D.C.

After that he started working as a part-time pastor, but he needed full-time employment to get a visa. He meet Missouri Conference District Superintendent Rev. Hyeon Mi Lee who encouraged him to come to Missouri. He took an appointment in the Southeast District in 2019. He had never lived outside of a large city before. He describes the transition as very meaningful.

“The big cities are crowded, and everyone is in a hurry,” he said. “Here it is calm and peaceful, and everyone is very nice to me. Perhaps nicer to me than even the average person, because I am someone of a different ethnicity.”

Like Uhm, Yi has found a way to share his gifts with the community. Before becoming a pastor he was a professional gospel singer in South Korea. This past year he sang the National Anthem on Independence Day before the start of a community fireworks display.

Then a couple of months later, at Pioneer Days, during a joint worship service held at the festival by several area churches, he sang “This is the Place” by the Gaithers.

Yi still communicates back home to South Korea often, especially with his father.

“Since he is a pastor and professor, he gives me advice about being a pastor and shares his theological insights,” Yi said.

Yi said the transition to the rural area is probably more challenging for his wife, Hyejung Namkung, because of her complicated visa status. She has also lived in cities, but the slower-paced rural lifestyle becomes a little too slow for her because her immigration status does not permit her to have employment.

“With her status, she isn’t allowed to work, so she has nothing to do,” he said. “She follows with faith, but it can be a little lonely.”

They take trips to Farmington, Cape Girardeau or St. Louis to occasionally take a break from the peaceful country and get a little more urban.
News