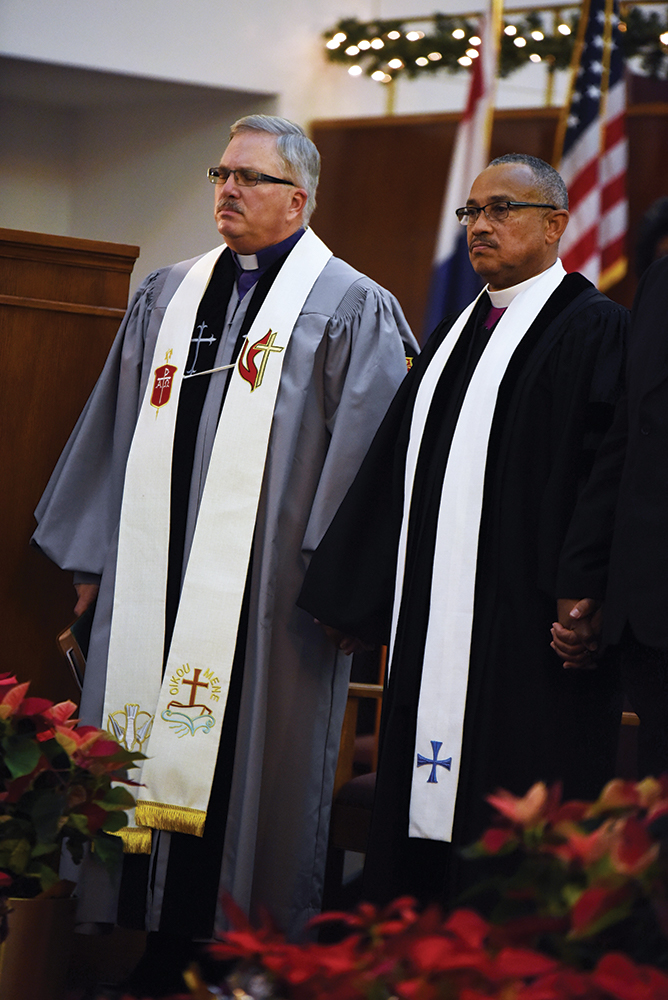 Missouri Bishop Bob Farr opened his sermon at the Pan-Methodist Emancipation Proclamation Day service with a confession: Prior to his participation in the service his previous year, the concept of celebrating emancipation day was never on his radar.

“I learned so much being here last year, things I was never taught in schools,” Bishop Farr said.

The Emancipation Proclamation was written by President Lincoln on September 22, 1862, and went into effect January 1, 1863. It was limited in scope, written with political and military strategy in mind, to specifically admonish the southern states that were in rebellion against the United States. The United States National Archives describes the significance of the document in this way:

“Although the Emancipation Proclamation did not end slavery in the nation, it captured the hearts and imagination of millions of Americans and fundamentally transformed the character of the war. After January 1, 1863, every advance of federal troops expanded the domain of freedom. Moreover, the Proclamation announced the acceptance of black men into the Union Army and Navy, enabling the liberated to become liberators. By the end of the war, almost 200,000 black soldiers and sailors had fought for the Union and freedom.

From the first days of the Civil War, slaves had acted to secure their own liberty. The Emancipation Proclamation confirmed their insistence that the war for the Union must become a war for freedom. It added moral force to the Union cause and strengthened the Union both militarily and politically. As a milestone along the road to slavery's final destruction, the Emancipation Proclamation has assumed a place among the great documents of human freedom.”

Bishop Farr acknowledged the irony of him being the preacher for a service consisting primarily of African-American branches of the Methodist Church.

“I confess – I’m a little nervous about preaching. Many of you may be asking why a white man is preaching today. I’m not sure if I were in your seat I would listen,” he said.

Farr told of his Methodist heritage, and said the Methodists he grew up with viewed themselves as non-racist, but he now recognizes that being non-racist falls short of being anti-racist. He has heard from white clergy persons who don’t like protesting that has taken place to combat racism. He doesn’t agree.

“I believe that if you weren’t agitating, nothing would happen,” he said.

He quoted the scripture from Mark chapter 6, when Jesus implored his disciples to not be afraid.

“I believe those are some of Jesus’s favorite words: Do not be afraid,” he said.

Bishop Farr said too many people are peddling fear, winning elections based on fear and using fear to divide.

“Fear is not from God. When fear is used to separate us from each other it is from the devil,” Bishop Farr said.

“The devil’s favorite tool is fear. The sole purpose of fear is to separate people from each other, and from God.”

Bishop Farr explained that the Bible says we have been set free from fear. That doesn’t mean there won’t be hard times to come but that there will be a coming good time.

“Worry besets me now and then, but just because it invites itself into your life, that doesn’t mean you have to invite it onto the porch to stay all day,” he said.

Bishop Farr quoted his grandmother as saying that when faced with fear you can take flight, or you can “saddle up and ride in.” He offered four tools to use when struggling with fear:

1. Determined patience: It takes both determination and patience. He noted how the prophet Isaiah encouraged people not to panic, that the Messiah was coming. But a long time elapsed between Isaiah and Jesus.
2. Be quietly courageous: It takes deep courage you only get from God. As Psalm 23 says, fear no evil. People who peddle fear have convinced rural white and urban blacks to fear each other, although the two groups share many of the same struggles.
3. Do right: Deuteronomy 16 says pursue only what is right.
4. Love: 1 John 4 says there is no room in love for fear. Well-formed love banishes fear.

“Don’t let anyone make fear a wedge that is driven between us,” Bishop Farr said.