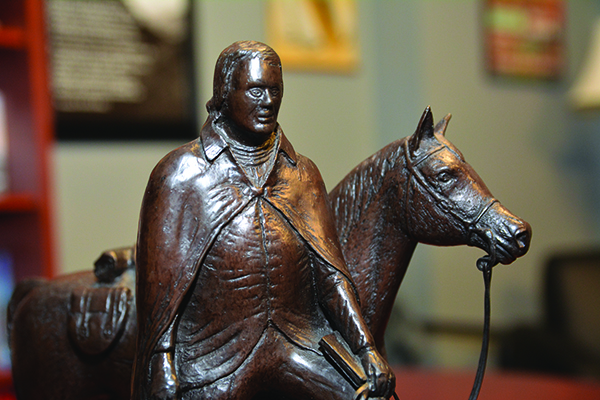 Some of you know that I’m a big Francis Asbury fan. Asbury was America’s first Methodist Bishop. In fact, he was ordained, made deacon, made elder and commissioned a bishop all in three days. (The procedures were a little shorter and simpler than today.)

Methodists have experienced a rich history and our denomination would not be here today without the ministry and leadership of Francis Asbury. Yet, compared with John and Charles Wesley, he is little talked about and less widely read.

Commissioned during the 1984 Methodist bicentennial, Asbury’s statue (pictured) is one of less than 100 created in celebration of American Methodist history. Susan gave this one to me for Christmas. I spotted it six or eight years ago in an antique store at the Fort Worth Stock Yards and passed up buying it. Susan tracked it down at the same antique store. The new owner just happened to still have it.

Entitled “Onward in God’s Name” the documentation that accompanied the statue stated the figure was inspired by an image of Asbury standing at a river’s edge looking at the opposite shore. The story is that, while accompanied by an apprentice clergyman, they came to a river that appeared to be too dangerous to cross. The apprentice clergy, overwhelmed by the potential risk of crossing the river said, “We need to turn back. It cannot be crossed.” To which Asbury replied, “Onward in God’s name!” I love the title of the statue. “Onward in God’s Name.” Perhaps this statement fits in today’s circumstance with the United Methodist Church. We seem to be standing at a crossroads or river wondering if we can cross it to our new future. Opinions and advice on the direction to take are many! Our church even appointed a commission called “A Way Forward,” and we all pray they find a way.

As we attempt move forward, standing at the crossroads, I join Asbury in saying, “Onward in God’s name!” Let’s keep our eyes on the mission field, focused on the gospel of the disciples, reaching people and changing our communities and world.

By the way; I am rereading “The Daily Asbury.” I want the character of Asbury to help guide me as your Bishop.