Mobility Cart Production Ready to Ramp Up at New Center 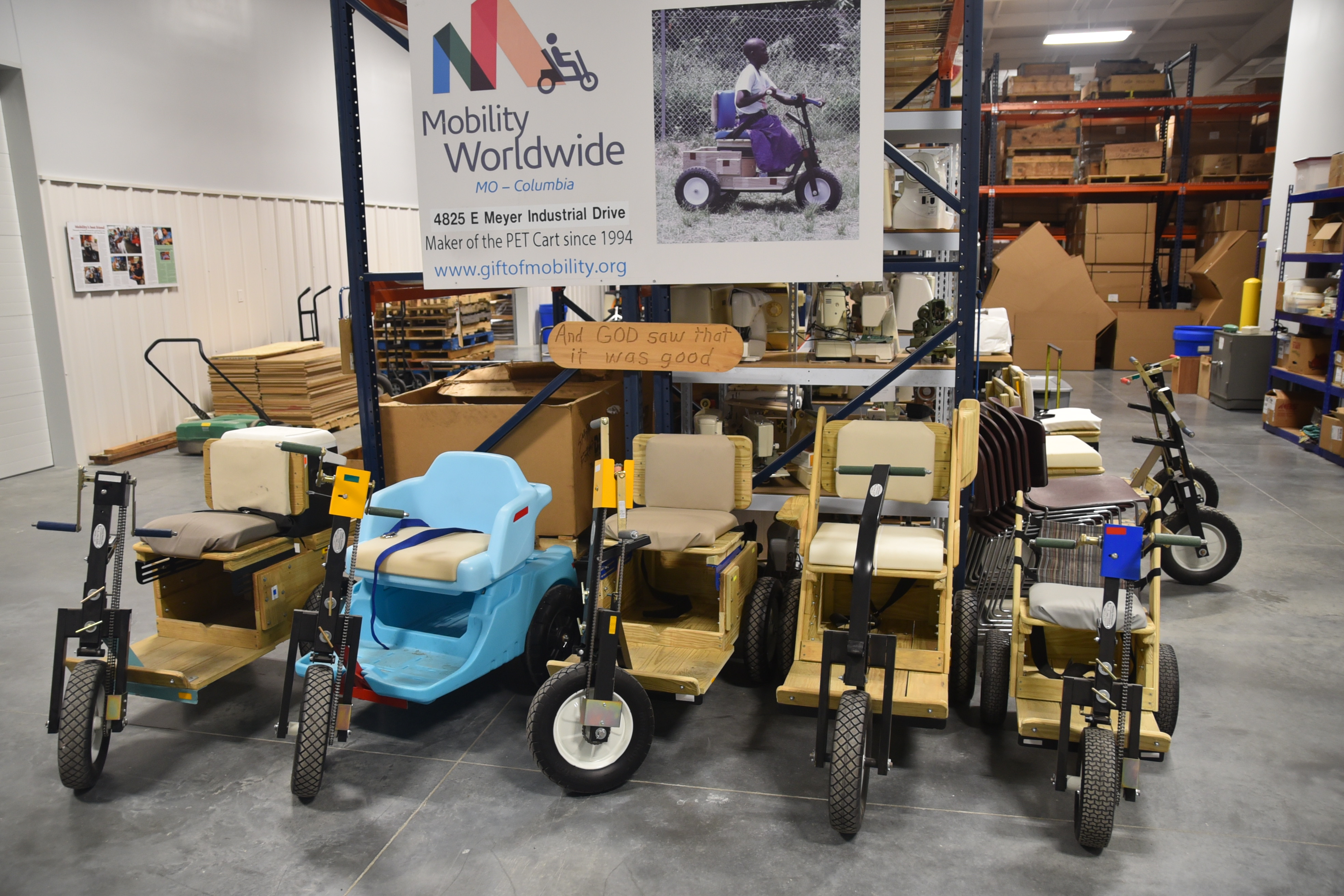 Many people are familiar with the story of the PET project and how Rev. Mel West made the connection between a missionary friend in Zaire and an engineering friend in the United States, resulting in the design and production of a hand-cranked mobility cart for victims of polio and land mines.

Many United Methodist churches in Missouri have been supportive of the project throughout its 25-year history. In the late 1990s, PETS was primarily built out of West’s garage and in a Community UMC room in Columbia. Today, they are being made in a new facility designed for that purpose, with a high-tech welding shop, woodshop, assembly line, packing area and loading docks.

The Mel and Barbara West Cart Center was officially opened in September of 2020. The pandemic caused the situation to have a quieter launch, with an open house event happening with a small group in attendance and Facebook Live.

Owning a building had been a dream of the organization for a long time. They now have a $1.5 million facility and debt-free.

They broke ground for the facility in December of 2019 and moved in Fourth of July weekend of 2020. The architectural planning started several years ago. Much of it was funded through a large gift by Jim and Judy Wall. The building is just south of Columbia on U.S. Highway 63, at 4825 East Meyer Industrial Drive. It’s one third bigger than the previous facility, at 12,500 square feet.

“The goal is to ramp up to 50 carts per week, from a previous high of 35 per week,” said Executive Director Gary Moreau.

It’s not the only place building mobility carts. There are now 21 affiliates, including two in Africa.

“Every shop stands on its own,” Moreau said. “Every affiliate finds its donors and its volunteers.”
The Columbia shop may be one of many, but it is undoubtedly the biggest.

“Our shop builds twice as many carts as any other location,” Moreau said.

Three weeks after the move, they were producing carts again. There are only three people on staff part-time, a shop manager, bookkeeper and director. There are more than 200 volunteers at the Columbia shop, with 40–50 putting in time there each week. Someone has the building open three mornings a week. The budget is built on producing 39 carts a week.

During the pandemic, some people volunteered to work alone or work at a considerable distance from anyone else in the shop. There hasn’t been any transmission of the COVID-19 in the shop, but three volunteers have contracted it outside the shop and had to quarantine.
The cart center is home to two other non-cart missions. One is the Container Project, which ships a container full of clothes and school supplies to Nicaragua to be distributed by the Rainbow Network.
Four United Methodist churches in Columbia are involved in the Container Project. The other is the Sewing Project, which collect sewing machines to distribute internationally to areas where sewing centers can be set up so that people there can have an income.

Although West handed Moreau the reins to the Mobility Worldwide in 2013, West has still been an active fundraiser, donor, and builder and was on hand for the open house in September. West and his wife Barbara are both 97 years old.

For more on Mobility Worldwide go to www.giftofmobility.org.