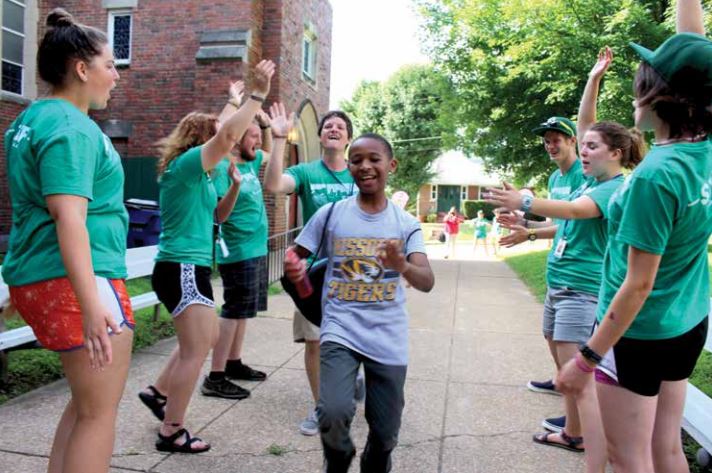 S ummer 2015 was full of new and exciting ministry opportunities in camping. We led a team of 20 excellently trained counselors to 10 United Methodist churches in Missouri.

The last week was bitter sweet as we reflected on the summer and the realization sunk in that we would be parting ways. All of their hard work and discipleship paid off with Mobile Camps reaching over 1,100 kids (ages 6-12) this summer and numerous amounts of kids now calling Jesus their Lord and Savior.

We visited communities large and small. Oregon UMC’s pastor Megan Winget told us she was determined to show everyone that a mobile camp can be successful no matter how small the town, and she did just that! Oregon’s population is 857 and 115 kids attended camp. The school principal told us that was more than 70 percent of the 6-12 year olds in the town.

The impact of mobile camp reaches more than just campers. Darla Nunn, the children’s minister from First UMC Poplar Bluff, said that because of the camp she will continue to work in the ministry field. Our counselors stay in host homes provided by the members of that church where that family cooks and provides a place to sleep. Alice, one of the host home providers from Kirksville, said if you ask her how much it cost to be a host home she would say that because of the gain on her end, priceless. She was hoping the counselors would gain something positive from staying with her family for a week, but instead she feels that she was the one richly blessed and humbled by their awe inspiring trust in God and enthusiasm. Alice considers the counselors she hosted extended family.

There have been many heart-warming testimonies and experiences because of Mobile Camps this summer. We got to help a blind camper and a camper with Epidermolysis bullosa climb to the top of the rock wall. We heard the joy and laughter of campers slide down the inflatable water slide in Ferguson. We shared in the excitement of a camper who has never won a game reach the King/Queen space in 9-square or beat everyone in the Ga-Ga pit. We prayed one on one with little boys and girls who were so moved by the Bible lessons that they wanted to know more about this loving God. We saw huge smiles on each face as they sing praise songs to God. I cannot wait to start planning the summer 2016 mobile camps.

If you are interested in hosting a Mobile Camp at your church you can email rvarner@moumethodist.org.