Missourians at the Mic 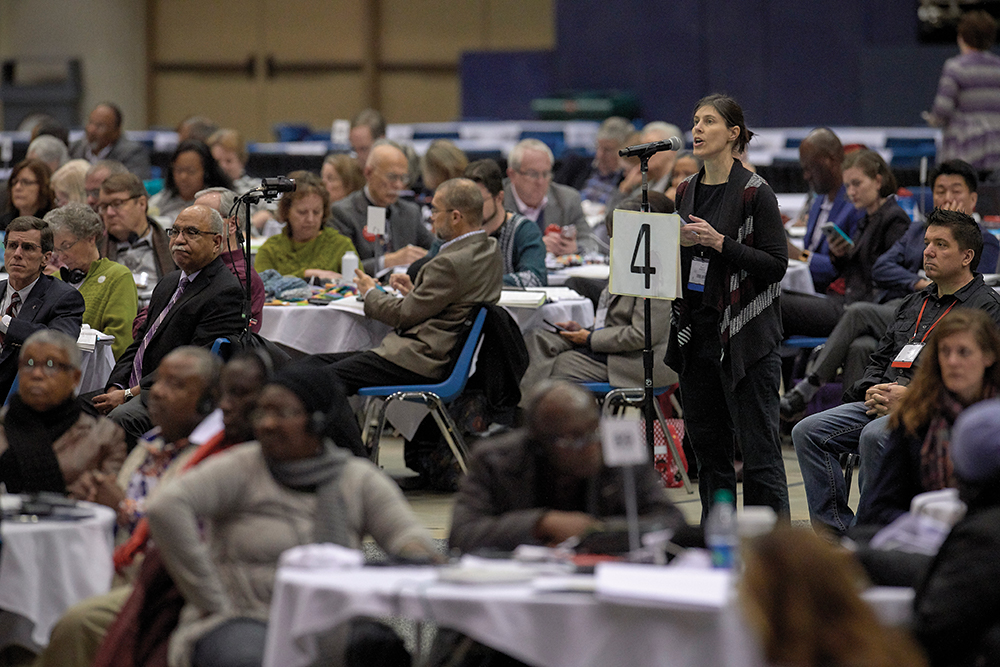 There were 864 delegates at the Special Called Session of General Conference, and the nature of someone speaking on the floor was closely regulated. When a proposal was being discussed the debate was limited to three minute speeches, with three speeches for and three against the proposal on the floor. Twice Missouri Conference delegates were heard from, both times for speeches opposed to the Traditional Plan. These are their full statements.

This is an emotional conversation. When we have emotional conversation, it’s hard to separate what we believe from what our task is. This is not a vote about what we believe about human sexuality. We are here are because we asked our bishops to help us move forward in spite of what we believe. The vision of the Commission on the Way Forward was to design a way to be church that maximizes witness and balances a process to different under with the desire for as much unity as possible. So the question we’re asking today is, “Does the plan unite us or not?” We’re not voting yes homosexuality is a sin or no it’s not. It’s not voting, “Yes, I believe the Bible is true” or “No, it’s not.” “Yes, I believe this plan unites us” or “No, it does not.” This plan does not unite us because it only allows for one perspective and doesn’t balance an approach for different understandings.

Emanuel Cleaver III
There’s a story in the Gospel of Mathew of Jesus feeding the multitude. It says that 5,000 men were counted, not including the women and children. That means there were more people present who were not counted than were counted. The reason that only 5,000 men were counted was that the disciples only counted people who were just like them. That means they overlooked people who were not like them. This plan counts one issue under the guise of Biblical authority. One issue. But it overlooks other important, pressing issues. It overlooks taking a hard stance when unarmed black men are shot and killed by those who take an oath to protect them. What this plan overlooks is taking a hard stance gender pay  inequality. What this plan overlooks is the fact that there are a number of social ills that we are simply not talking about.

We are looking at one issue while this denomination overlooks many problems of its own. For instance, there are many women who will not be appointed to serve as senior pastor in some of our largest churches. We’re overlooking that. We’re also overlooking that many African Americans are very limited in the number of congregations that they can serve. We’re overlooking that as of 2019, the South Central Jurisdiction has never elected a black woman to serve in the episcopacy. We’re overlooking the fact that the South Central Jurisdiction tried to force a black bishop to retire under the disguise of ineffectiveness, when we have current bishops who are ineffective and some who should not have been elected in the first place. When you look at the story, the disciples counted people who were like them, but Jesus fed everyone, even those who weren’t there – there was stuff left over. If we’re going to get Biblical, let’s get real Biblical.