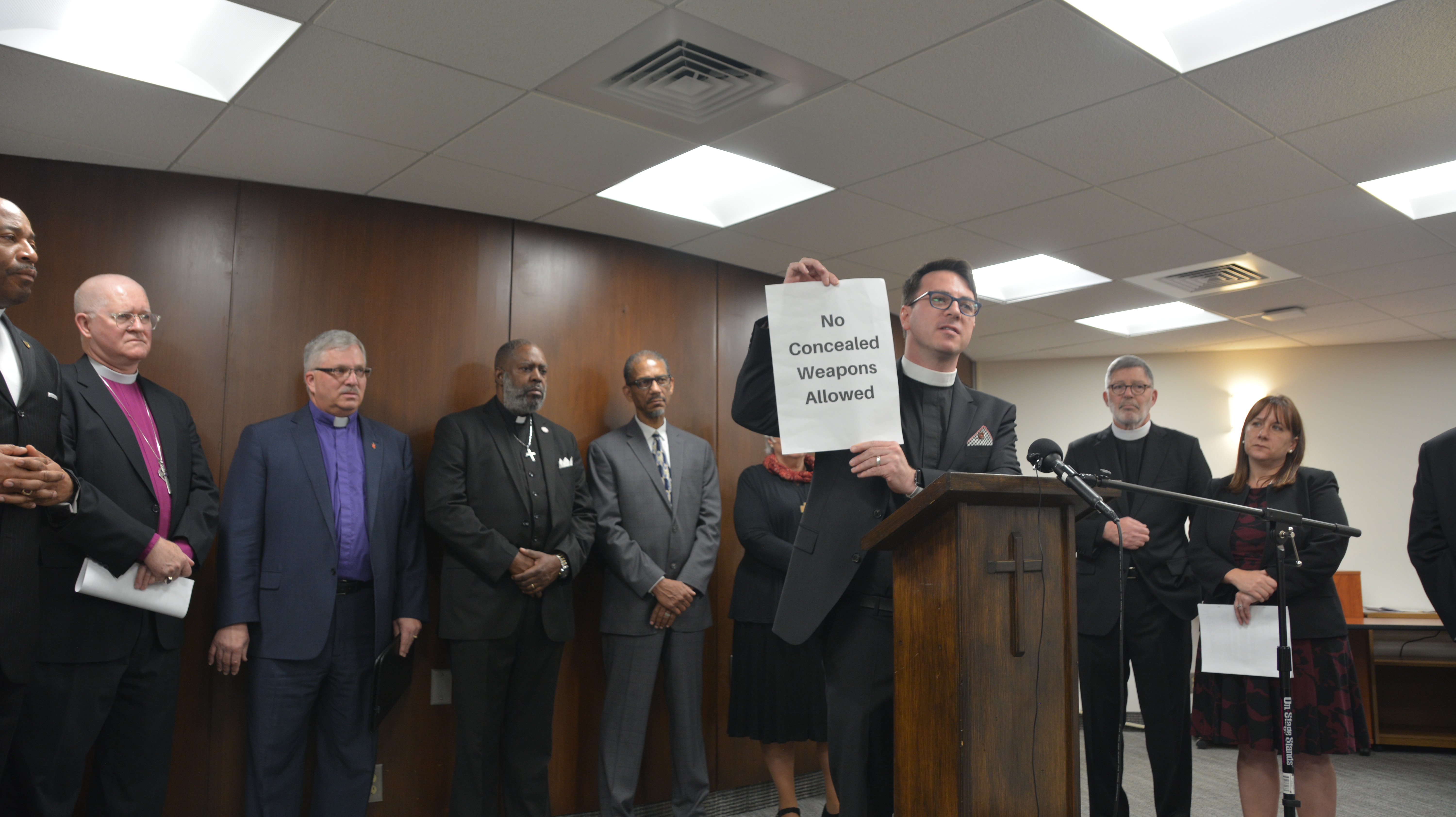 Missouri faith leaders held a press conference at the Catholic Charities office in St. Louis on April 11 to express their opposition to House Bill 1936, which relates to taking firearms into churches.

Currently in Missouri a person must request permission from the pastor in order to carry a firearm into a house of worship. If passed, this house bill would remove that local control and allow anyone to carry firearms into churches at any time without permission. The interfaith press conference involved leaders from the Catholic, Jewish, Episcopal, Missionary Baptist, Evangelical Lutheran, St. Louis Metropolitan Clergy Coalition and United Methodist communities.

“This change to current law takes control away from the local church and threatens their religious freedom guaranteed under the Constitution,” Missouri Bishop Bob Farr said in a prepared statement. “We must allow each local church to maintain the right to decide the best approach for their church. I cannot support any bill that might negatively impact the safety of a local church and remove the ability of the local church to self-govern. Missouri statues have long exempted churches as places in which individuals might freely carry firearms. This exemption is critical to maintain our local autonomy and religious liberty.”

Under the bill, pastors who want to limit firearms in worship would be required to post signs on the doors to the entrance of the church, a minimum of 11 inches by 14 inches, with letters at least one inch tall stating “No Concealed Weapons Allowed.” Rev. Mike Angell, rector of the Episcopal Church of the Holy Communion in University City, said the required posting of signage to restrict weapons in worship is an affront to religious liberty.

Archbishop Robert Carlson was incensed that the Missouri legislature would move forward with a bill specifically affecting churches without considering the churches perspectives.

“It is surprising they are introducing change at the state legislators with regards to our churches without inviting the church to be part of the conversation,” Carlson said. “People don’t need to be reminded about guns every time they walk into church. We are there to pray and open our hearts and minds fully to God.”

When the group was asked if anyone of them had been contacted by a legislator inquiring about their opinion on the proposed changes, all of the religious leaders replied that they had not.

Rev. Marc Smith of the Episcopal Diocese of Missouri said the use of images in sacred places is a critical part of worship, and the signage requirement would constrain the use.

“To have sacred images constrained by images we find offensive and inconsistent with non-violence and peace of religious experience is beyond deeply troubling. It is simply unacceptable,” he said.

The group said if the legislators were concerned about safety, they should consider bans on bump stocks, restrictions on high capacity magazines, strengthening background checks and having better access to mental healthcare. They encouraged people of faith to contact Missouri House Speaker Todd Richardson to voice opposition to House Bill 1936 and encourage more sensible conversation around gun safety. Richardson can be reached at (573) 751- 4039 or by email at todd.richardson@house.mo.gov.