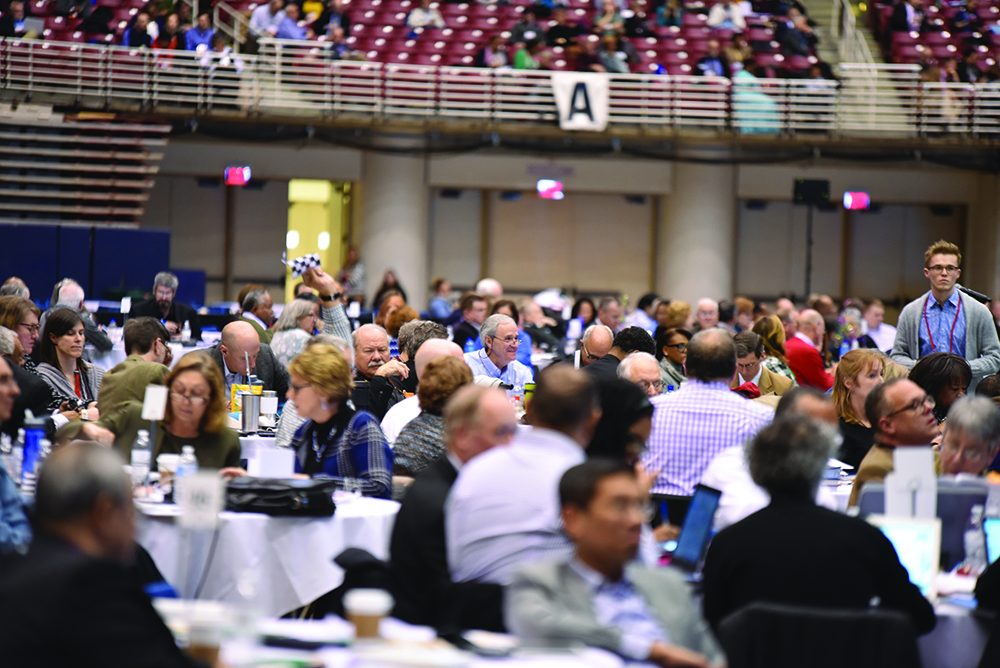 In 2016 when the Council of Bishops were asked to provide guidance on how the United Methodist Church could move forward regarding issues related to human sexuality, Missouri Conference lay delegate Margie Briggs thought it would be a good thing. “I trusted that something good would come of it,” she said.

But by the time the special session actually came around she had lowered her expectations. This was Briggs’s seventh time to serve as a delegate to General Conference, and she was very familiar with how these debates usually go. So while she was empathetic to her friends who were crushed by the defeat of the One Church Plan and approval of the Traditional Plan, and she shared in their pain, things actually went a bit better than she expected.

“I thought it would be an overwhelming margin in favor of the Traditional Plan,” she said, recalling that she had seen previous votes at General Conference around similar issues favor the current stance by a margin in the high 60 percent. Most of the votes at this Conference were closer to a 55–45 split.

“That was narrower margin than I had seen before,” she said. “I think some people changed when they got there. I think a lot of centrists may not have liked the One Church Plan because they viewed it as being more congregational, but they didn’t like the Traditional Plan either.”

Briggs recognizes that the churches she serves don’t have a dog in a fight. As a lay speaker, she can’t marry anyone. And it is pretty unlikely that if she stopped serving those churches that she would be replaced by an openly gay pastor, even if it was approved.

“I have every confidence that the Missouri Conference will move forward in its mission of making disciples of Jesus Christ for the transformation of the world,” she said.

A family with a married lesbian daughter told Briggs they would not be at church that Sunday, because they wanted people at the church to be able to discuss their feelings openly, but were also concerned that people would say things they would find upsetting. Briggs doesn’t think it would have been an issue, as she trusts people in her congregation to be respectful.

“I’ve found that until it becomes personal, unless you have a close friend or family member who is gay, most people really don’t have much of an opinion about this,” Briggs said.

“It was a waste of $3.6 million, and it caused an unbelievable amount of pain,” Briggs said. “That money could have been used to hep God’s children who don’t have enough to eat or a place to live.”

At General Conference in Portland in 2016, Briggs missed a step and broke a bone in her foot. On Easter in 2018 she was diagnosed with non-Hodgkin’s lymphoma. She’s now cancer-free and is recovering well. “My birthday was just before General Conference, and I’ve never been so happy to have a birthday,” she said.

Although despondent about the special session, Briggs is willing to go back to General Conference in 2020.

“If elected, I will go back and do my best, just like I have since 1992,” Briggs said. “I feel I owe it to my churches, to give small rural churches a voice at General Conference.”

And she’s looking for a different ending.

“I don’t want to leave on a sour note. I want to be part of something good,” she said.

Missouri lay delegate Jill Wondel said part of the problem was the way the Conference was structured.

“At the previous General Conference session I enjoyed the committee work. In the smaller group session you could speak more freely,” she said. “In legislative committees, and subcommittees, you could come to common understandings with people. Here, with everyone in a committee of the whole, there was no way for that to happen. Not as many people had a voice. Everything becomes an either/or choice. Jesus taught us things don’t have to be that kind of choice.”

This was Rev. Cody Collier’s eighth time to serve as a delegate to General Conference. He was on the design team, so starting out he was working with the hospitality teams and worship director to pull things together.

“I really appreciate the work of the hospitality team chairs and of all the volunteers who were there to help,” Collier said. “It was also very helpful to have all of our District Superintendents present to pray with people.”

Collier sees that a problem with the structure of the special session is that it relied on the standard method of conducting General Conference, which meant the arguments were a rehash of previous General Conference sessions.

Collier was pleased with the Day of Prayer on Saturday, and really appreciated the steps that were made to have it be inclusive of the various cultures present.

“It’s unfortunate that the expressions of unity and love that united us in song and word on Saturday wasn’t reflected in the debate for the next three days,” he said.

Collier is unhappy that the General Conference ultimately approved a plan that is more punitive and spent very little time even discussing either of the plans that were put forward by the Commission on the Way Forward and endorsed by the Council of Bishops. But he wasn’t surprised.

“Many people were thinking the One Church Plan would pass, but having been to General Conference as much as I have, I didn’t see that happening. The votes just weren’t there,” he said.

Collier is appreciative of the Missouri delegation working well together and of all the effort Bishop Farr went to last fall in doing a series of regional conversations around the state.

“We have great priorities set before us in the Missouri Conference, and I hope we can continue to focus on the mission of the church,” Collier said.

Personally, Collier favors full inclusion. “As an African American, I know what it feels like to be discriminated against. I’ve lived it. I’m still living it,” he said, adding that he feels everyone must be valued.

“We can’t say we have open doors while we are slamming some of them shut,” he said.

Lay delegate Ivan James offered a similar synopsis on his Facebook page after the conclusion of the special session.

“While I was honored to represent the MO Annual Conference on Tuesday evening I was mad, hurt and embarrassed of what had transpired over the last four days because I expected more from the Christians of UMC,” James wrote. “What I had experienced in the Dome was what I call “hypocritical theology,” that is to say one thing and do something different. I also realized that this entire discussion was about power, property and profits, not ministries and people. While unity was the main goal of the General Conference most of the discussions have caused the Church to split further apart. During a restless Tuesday night I asked God’s forgiveness for any harm, intentional or unintentional, the Church might have caused our LGBTQIA+ brothers and sisters. I also asked God not to forsake the UMC as it reached out to the least, the lonely and the lost.”

This special session was only the second time serving as a General Conference delegate for Rev. Lynn Dyke. She went into it with optimism.

Unfortunately most of that hope drained away over the course of four days. Looking back she realizes that she should have seen this coming, noting that the Commission on the Way Forward had spent a lot of time together working on this, and in the end rather than agreeing on one way forward, they had one plan that was endorsed by most, another optional (Connectional Church) plan endorsed by some and a third plan (Traditional Church Plan) that some on a commission requested be put forward.

“After all of that time, if the commission couldn’t agree on a plan it seems unlikely that 864 delegates would,” Dyke said.

They didn’t agree, of course, but a slim majority did go for the Traditional Plan, which would have been the last choice for the people on the losing side of that slim majority.

“General Conference really showed me what a fractured church we are,” Dyke said. “A vote of 53 to 47 percent isn’t a rallying cry for any decision.”

Dyke said regardless of one’s position on any of the plans, the process at General Conference was a damaging one. “It is hard to watch all of that dissension and pain,” she said.

This was the seventh General Conference for Larry Fagan. By the time the special session started his hopes were not very high. He feels a disconnect has developed between a more progressive Council of Bishops and a more traditional laity.

“That makes it difficult to arrive at a common position,” he said.

He did not think the One Church Plan with it’s endorsement from the Council of Bishops had much chance of passing, but he didn’t think the Traditional Plan would either. His pre-conference prediction was that nothing would pass. He feels the current Book of Discipline has language that is adequately structured to allow for enforcement and was surprised that more people didn’t consider the Traditional Plan too harsh to pass.

“I think the WCA has a very strong influence, and they forced the General Conference to make a decision they didn’t want to make,” he said.

Fagan was head of the delegation at the General Conference in Cleavland in 2000, where someone threatened suicide by nearly jumping from a brick pilaster. Although this Conference did not quite have that flashpoint of drama, he felt the overall sense of it was worse.

“There was a lot of pain and hurt this time,” Fagan said. “I don’t know anyone who felt good when they were leaving.”

Fagan expects much of what passed will not be held up as constitutional.

“The stakes are high, so things will likely get extra scrutiny at the end of the day,” he said.

“At the end of the day, the best thing to happen is for time to pass, for people to see that their church is the same today as it was yesterday and as it will be tomorrow,” Fagan said. “If we can redirect our focus to the mission of the church, over time I think this issue will take care of itself.”

Fagan appreciated a session the Rev. Steve Breon had at the church post-General Conference. Rather than doing some kind of Q-and-A, Breon simply relayed where the church was before General Conference, where it is now and the delicate balance churches have in living out their ministry while following the Book of Discipline.

Breon said he personally tends to be a rule-follower, and Fagan got the sense that the congregation appreciated having someone steady at the helm. He understands how that would be a different scenario in a church actively struggling to be more inclusive, though.

“It is difficult to say you have open doors and then tell someone there is a door at the side of the room that they may not go through,” Fagan said.

“When Peter was walking on water, so long as he kept his eyes on Jesus, he had no problem. But even when he waivered, Jesus quickly reached out to save him,” Fagan said. “The church may be in a difficult spot right now, but we’ve got a good track record of Jesus saving us when we need it.”