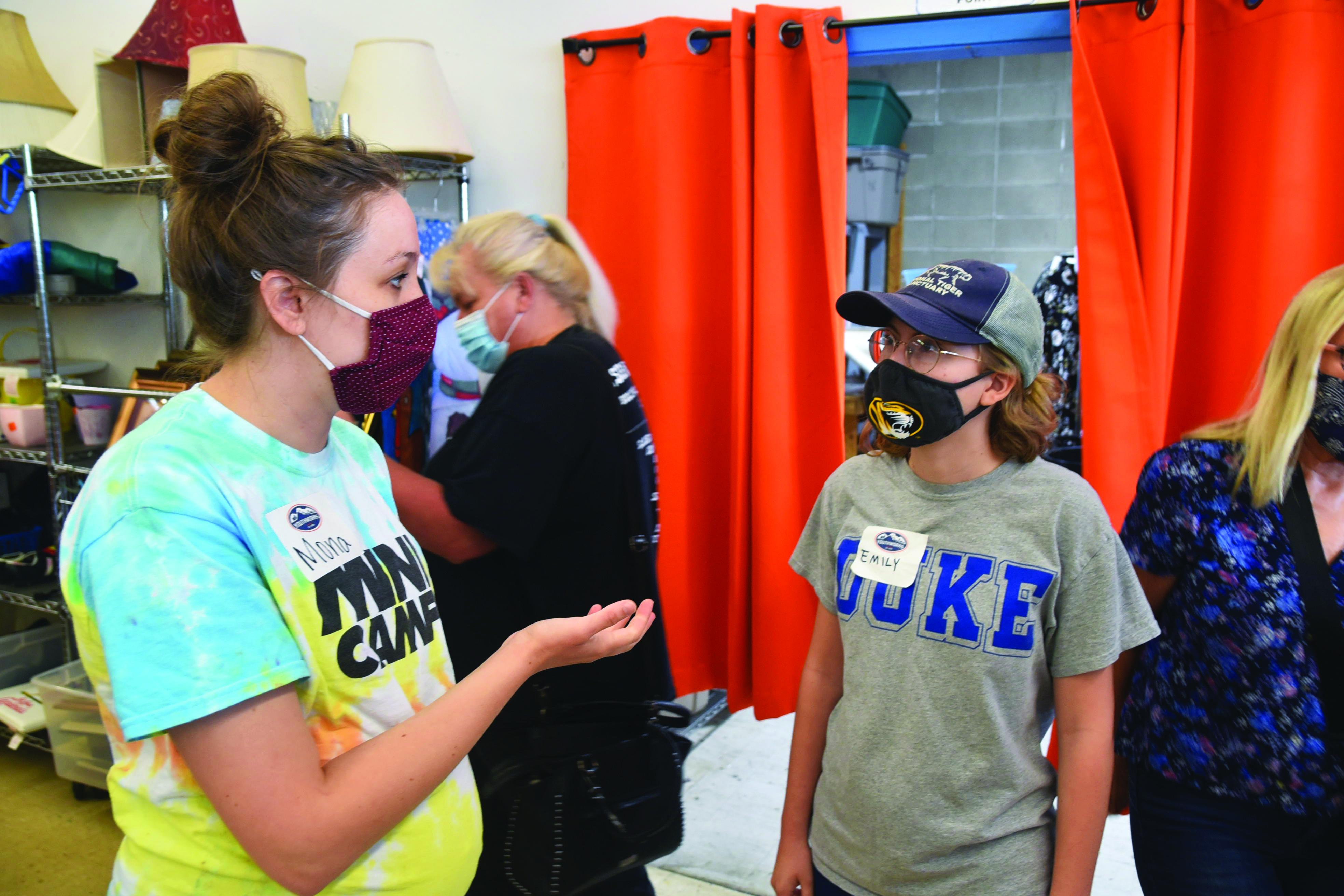 “You always have to be flexible with mission trips,” said First UMC Blue Springs Mission Director Brooke Roskop. “This year you have to be really flexible.”

Blue Springs is very active in mission, both close to home and in other places. Members look forward to the team experience each year and missed having it last year. This year they started planning early and with precautions.

“We had to make decisions in January about what we could do to eliminate some variables,” said NextGen Pastor Rev. Mona Candea.

They decided to keep the high school mission team in Missouri, to avoid differing state regulations around COVID-19 protocols. They also decided to work decided to work with Missouri Conference NextGen Ministries to sign up for a YouthWorks camp. They thought that would offer some assurance of compliance with safety measures, not just for COVID-19 but also for Safe Gatherings precautions.
“This is our first time to work with YouthWorks, and it’s been great,” Roskop said. “We will definitely be working with them again next year.”

They stayed at a Lutheran Church, which Candea and Roksop said was great. They appreciated the YouthWorks support.

“YouthWorks coordinated all of the logistics with rooms, meals, everything we needed,” Candea said.

The church had a smaller group this time. Four youth who were planning on attending had to not participate due to COVID-19 exposure shortly before the trip. Five high school youth participated, and four adult sponsors attended.
One of the youth from Blue Springs, Emily Stokes, had participated in mission trips with the church to Arkansas, Springfield and around Kansas City.

“I just like to serve,” she said. “It feels good to have an opportunity to help out in some way.”

It wasn’t all work. The group made it to most of the St. Louis highlights, including the City Museum, the Gateway Arch, Ted Drewes frozen custard, an escape room and Six Flags.

Most of the mission work took place at Feed My People, a food bank and thrift store in south St. Louis. The agency is about to undergo a $660,000 remodel. The organization has already raised more than $400,000 to pay for it. Karen Lanter, director of Feed My People, explained they are changing from a typical food bank to more of a grocery store model.

“Giving clients a choice about the food they get leads to them making better nutritional choices at other places,” Lanter said. “Because we’re not profit-driven, our shelf placement will have high-nutrition food placed in line of sight rather than sugary snacks. We hope to help people form habits that will help their food dollars stretch further.”

The new model will include a prayer room up front in the store. The ministry also provides assistance with utility payments, gas cards and job placement. YouthWorks spent a week at Feed My People in June and three weeks in July.

Feed My People will be 40 years old next year.
Its founders are still board members. They are Lutheran, but the ministry is supported by 25 different churches. The volunteer coordinator position at the agency is funded by the Lutheran Foundation.

Feed My People has 400 volunteers on their roster, but the average age of the volunteer is 74. This year 72 volunteer groups served at the ministry in addition to the regular volunteers.

Christine Harris was along on the trip from Blue Springs. She has been part of the church for about 30 years — nearly her entire life. She’s active in mission work and is part of a mission team that goes to Costa Rica every year — except last year.

“It’s been a great week, especially after not having anything last year,” Harris said. “It’s been fun getting to know people in our group better, and other groups as well.”

Several weeks after the high school mission trip the church is taking a middle school group to Sedalia. They had originally planned on Springfield, but the town was over capacity in its hospitals due to a surge in COVID-19 so the trip was cancelled.