Loving a Church Through Transition 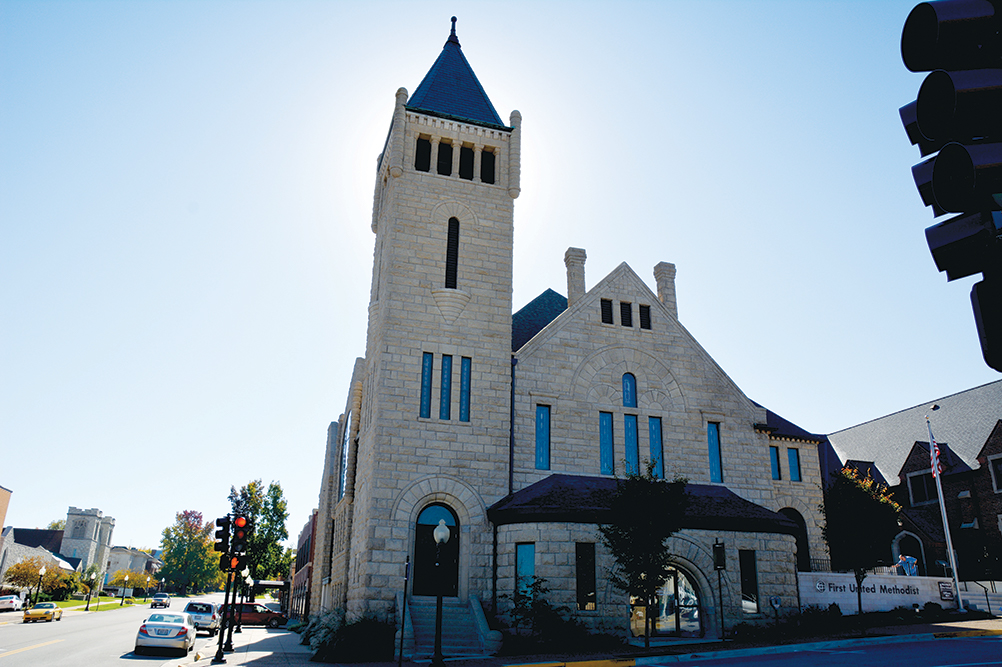 Few churches in America have gone through a radical physical change as successfully as First United Methodist Church in Jefferson City has since 2011. For starters, the traditional church pews in the huge sanctuary were replaced by chairs, and along with removing the choir chairs the chancel was dramatically redone, and even the historic chapel was eliminated. It happened quite smoothly with more worshippers gained than lost.

Dr. Gene Rooney was appointed to the congregation in 1975 and served until 2000. During his highly fruitful ministry worship attendance grew from 280 to 700. Although having a solid base of senior citizens, it had a large contingency of younger families resulting in youth numbering 200-300 connected with the church.

The congregation went through three pastoral changes until 2006 when worship attendance had dropped to 508. At that point Daniel Hilty was appointed as the senior pastor. It was under his wise, loving and disciplined leadership that the church went through an amazing physical face change. What efforts did God use to accomplish the renovation without the difficulties many churches experience?

The church spent months discussing where it felt God was leading the congregation to move into the future. Dwindling worship numbers and an aging congregation were a reality the church needed to address. The 9 a.m. contemporary worship service was the largest of three, and it took place in the Family Life Center (a euphemism for the basement gym). Getting there was a catacomb experience for first time guests. Through discernment the congregation felt all worship services needed to take place in the first floor sanctuary in order to grow.

Attracting younger families requires ministries to children and youth, so a huge children’s area was created on the first floor for the week day preschool and Sunday School. The church staff graciously agreed to move their main floor offices to the lower level for this to happen.

Making these physical changes was perhaps the easiest part of the renovation. Getting there was far more important and perhaps more difficult.

Untold numbers of conversations took place to bring about the change. Pastor Daniel wrote, “Giving people the opportunity to talk about the changes, and to know that their voices are an important part of the process, can help everyone in the congregation grieve their losses, normalize the changes, and express their hopes and dreams.”

A dozen open publicized meetings were set up to get feedback from the congregation with responses being recorded. The governing board listened to the people, and published a “Frequently Asked Questions” document. As a result two different required votes were 80% in favor of renovation.

Whose Change Is It?

Motive for change influences the response of a congregation. If the work of God is seen as the motivation for change, it lifts the spirit of change to a higher level. Members of First UMC were challenged to ask: “What is God calling us to make new? What is God calling us to preserve?” Bringing enlarged numbers to faith in Jesus Christ was the basis for change. Seeing the renovation in that light the congregation saw it first as a spiritual matter and secondarily as a material one. Having an image of new, younger families coming to Jesus Christ became more important than keeping things the way they were with the pews and chapel.

Along with discernment, the congregation was constantly encouraged to pray for the whole effort along with the prayers of a Prayer Team.

Pastor Hilty wisely and patiently led the congregation through an efficient administrative process. It included adopting the Single Board model for the church, which streamlined decision making. What would have taken a year or two was accomplished in months.

When choices for the congregation are made quickly by a small group, distrust also arises quickly. Pastor Daniel wrote, “Good communication was the most helpful tool for addressing the mistrust: To varying degrees of success, we strove to make the board meetings open, publicize them widely, broadcast their decisions well, and provide ample opportunities for congregational input.”

The bold physical changes have resulted in worship attendance growth from 464 in 2012 to 493 in 2013. These figures include a growing number of younger families resulting in 236 children from 89 families registering for five summer camps. The church was electric with new energy. Building programs require tons of work, but Pastor Hilty said throughout the renovation he felt like he “was sitting on a hillside watching a rainbow form the way things came together.”
News