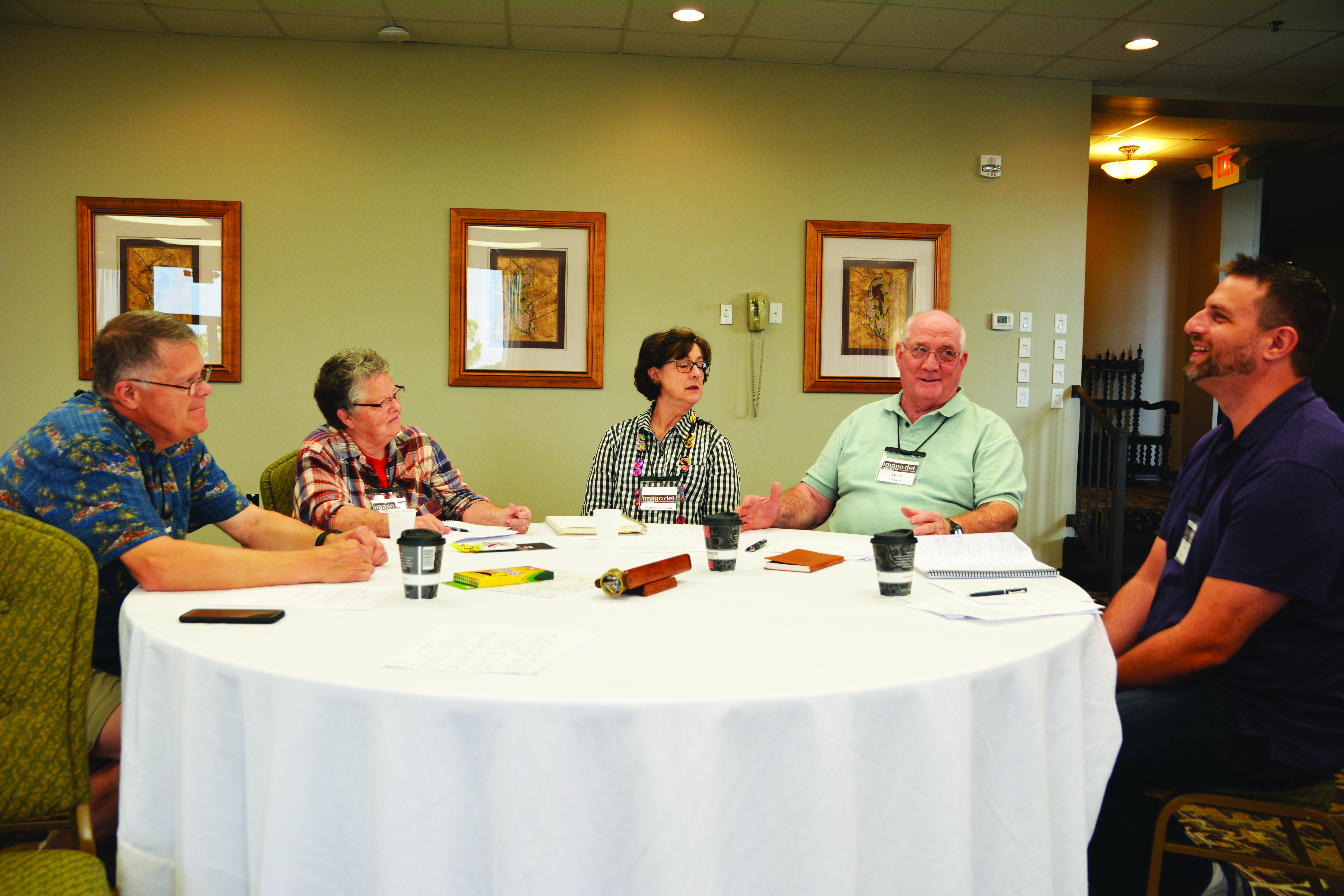 A  pastor can be so caught up in responsibilities of administration, passion for mission, calls for justice, outreach and congregational care that the spiritual side of life can get neglected. The last week of August about two dozen Missouri Conference pastors and lay people gathered for a Soul Connections spiritual retreat led by Heartland District Superintendent Jim Simpson at the Lodge of the Four Seasons at Lake of the Ozarks.

Simpson explored the Imago Dei (the image of God) in life and faith by using the metaphor of a kaleidoscope and made several of his personal kaleidoscope collection available for reflection during the retreat.

As a tool for discussion, Simpson offered the questions of who is God, who is Jesus, who am I, what this means with faith and grace, and with the church. To each question, he applied to categories of relational, belief, sacramental, mystical, economic, political, cultural and ecological.

For example, in the relationship column under Who is God? Were the words father, mother, love, counselor and comforter. He explained that the elational dimension is about our feelings and our emotions. In the relational column, the church is the family of God.

“Ask a majority of churches what it means to be church, and they’ll say family,” Simpson said.

This notion was discussed within the group.

“We’re a dysfunctional family, striving for the ideal, but we’re not there yet. We must hold ourselves in that tension,” Rev. Jenn Klein said. Simpson agreed that it can be challenging to be in an intentional covenant relationship with one another and with God. Klein said she sees this come to a head with people who are new to the church.

“New people are excited to be there, but after about six month the reality of relationships start to kick in,” she said. “Sometimes that is when God is revealed, or it is when the new person may leave.”

In the column of belief, Simpson addressed the tension between belief and capacity to listen.

“Do we have space for discussion without telling someone they are wrong?” he asked.

Rev. Larry Williams said the popular view of the church would say no.

“Culture has declared that religion has one view, and it takes quite a bit of work to help people see the fluidity of faith,” he said, noting that he finds it OK to float a bit in beliefs about things, but congregations don’t really want to hear a pastor who floats a lot.

“To continue that imagery, I don’t think it’s all too helpful to just drift along,” Simpson said. “Methodists are good at giving people permission to make up their own minds but inept at providing the foundation to help people make up their own minds. Most of our people couldn’t name eight or 10 things that Methodists believe.” Simpson said on foundational beliefs; It’s OK to be upfront.

“I think it’s OK to say to people that ‘I don’t think you’ll be comfortable in this church because we’re not Biblical literalist,’” he said. “Also, we’re done with debating gender issues. If someone isn’t comfortable with women in leadership roles in the church, they won’t be comfortable with us.”

“A challenge in church today is that we envision spiritual practice in narrow fashion,” he said. “We need to broaden it.”

Simpson said throughout his time as a local church pastor, when he has talked to people about their spiritual gifts, they usually don’t know what their gifts are, and it becomes an awkward conversation. Rev. JC Bryant said he would rather not say what his gifts are.

“I have a problem with self-proclamation of my spiritual gifts,” Bryant said. “It seems more in compliance with God to recognize gifts in others. If my gift is there, I pray someone sees it. I can’t say, ‘In case you missed it, I have this gift.’”

Simpson agreed that humility is a virtue but also believes gifts can be self-identified. “You don’t need to brag about a gift to claim it and affirm it. You might be helping others claim and affirm their gifts,” he said.

Klein said she had an epiphany regarding spiritual gifts when she realized the importance of identifying where you are spiritually gifted also comes through inversely.

“I came to realize that I need to rely on others for things I’m not gifted in,” she said.

When the conversation moved to the economic, Simpson said it’s about money, but more than that, it is about value: how you value yourself and others. It’s a dimension about blessings, both how they are received and how they are offered.

Rev. John Harp said he finds this dimension challenging to address when preaching to a multi-generational congregation.

“To the younger people, I want to address consumerism, but to older ones I want to preach that your security is not in your bank account,” he said.