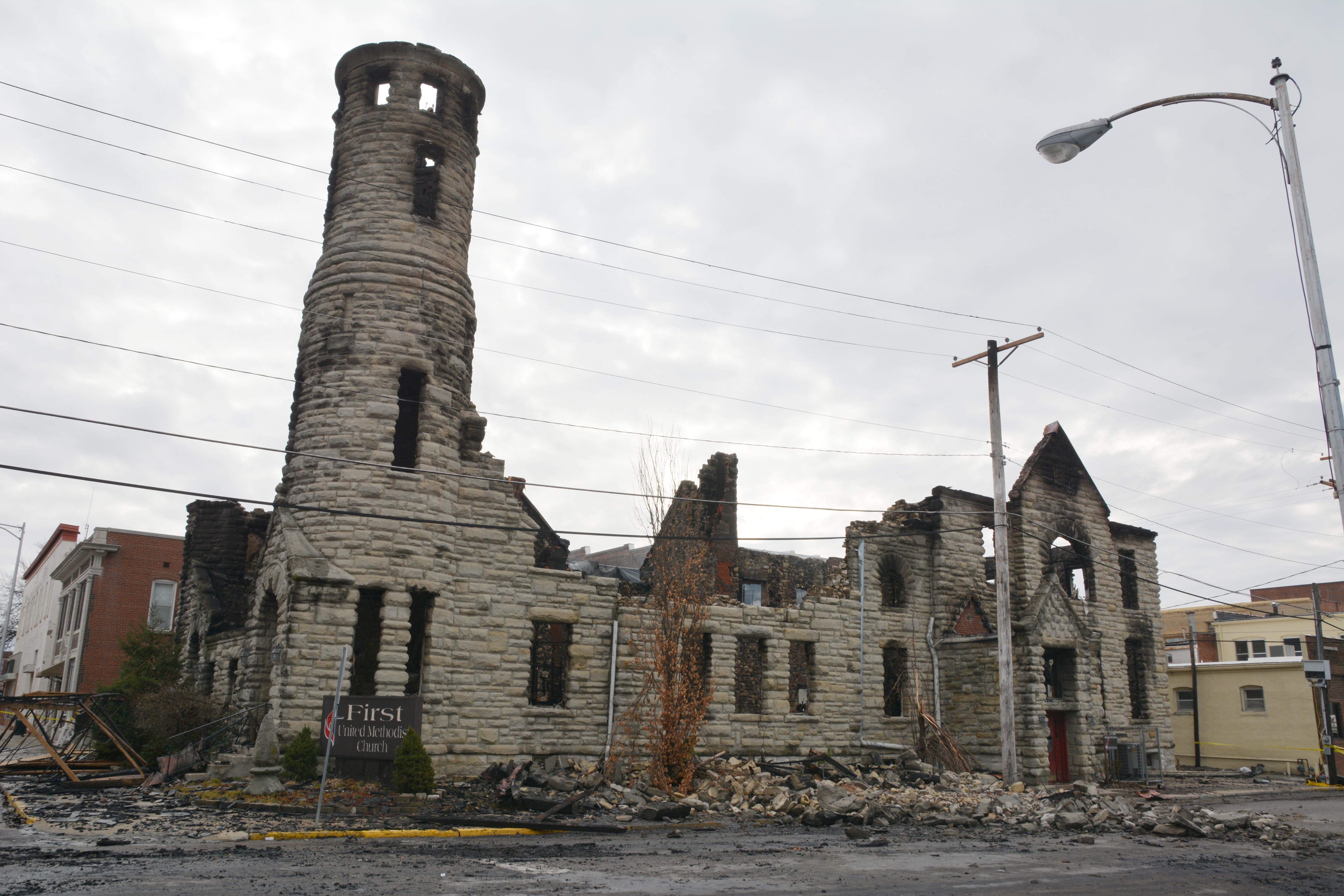 A Missouri Conference church that has served as a model for multi-site ministry is suddenly down to one site after its historic downtown structure was consumed by fire Wednesday night.

A Sedalia police officer called in the fire at First United Methodist Church at 9:49 p.m. after spotting flames during a routine patrol. The first fire engine was on the scene within three minutes.

“By then the high stained glass windows were already busted and flames were coming out,” said Sedalia Deputy Fire Chief Greg Harrell. “When I arrived a few minutes later it had already breached the roof, and we had to be in “surround and drown” defensive mode to protect neighboring structures. There was too much fire to go inside.”

Harrell has been a fire fighter for 37 years, and said he’s never seen a building like this go so fast. The fire was called under control by 1:30 a.m. on Thursday, but firefighters were still hosing down flames as they popped up mid-morning.

One fire fighter injured his ankle during the response. There were no other injuries. 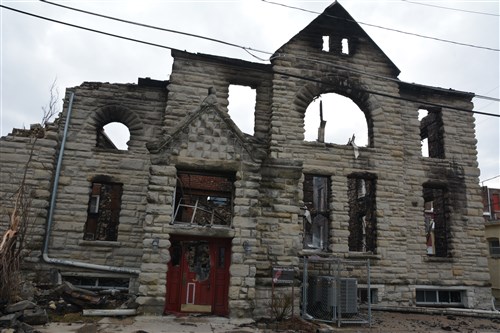 This fire was particularly difficult for Harrell, as it was his church home. His wife’s great-grandmother had helped raise money to build it.

“It’s hard when it’s your own,” he said. “I was an usher here on Sunday. Feeling loss like this keeps me very sympathetic to everyone who loses things in a fire.”

Harrell was also married in the church, as were many in Sedalia.

“This location was a very popular place for weddings, both with people from within our congregation and from around the community,” said Rev. Mike Cassidy, associate pastor at First UMC. Senior Pastor James Downing has been visiting the Holy Land, and was on his way home when he received the call about the fire.

The cornerstone for the church was laid in 1888, and it was formerly opened two years later. It caught fire in 1893 and was repaired. An addition was built in 1925.

First UMC is the 16th largest church in the Missouri Conference, averaging 781 in weekly attendance last year. It has five worship services, one of which was held at the downtown location. The others are at the second campus, known as the Celebration Center, which opened in 1999.
Cassidy said there had been a resurgence recently in the downtown campus.

“We had been getting up to 115 or 130 some weeks,” he said. “We have been trying to reach out to the neighborhood, and were beginning to see more young families down here. We had just remodeled the room where young adults meet.”

Cassidy had five meetings at the church the previous day with different groups that were in ministry there.

“One was working with a person who organizes our Foster Care Closet, a ministry that provides resources for people who are taking in foster children. We had just selected a bigger room for that ministry to move up to,” Cassidy said.

Rev. Kyle Evans, a retired United Methodist elder who is connected with First UMC, was on hand Thursday morning to help in any way that she could. She was concerned about Downing.

“I know this must break his heart. When you have such a history with a place, it can be like losing a member of your family,” she said.
Betsy Charles was feeling that pain. She’s a long-time member, and one who has always worshipped downtown. She recalls the decision to build the new campus.

“We were torn as a congregation, because we wanted to expand beyond our land-locked campus, but people loved the downtown church. Jim showed us that we didn’t have to leave a good thing – both needs could be met,” Charles said. “I love this (Celebration Center) facility, but home was always downtown.” 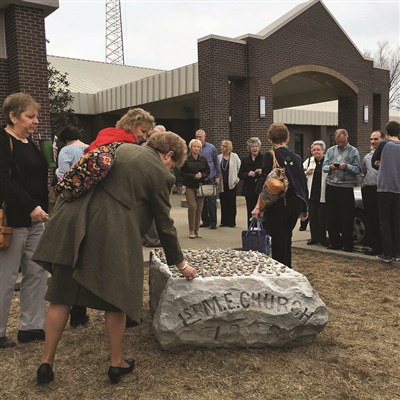 Charles and her husband Willis had constructed a tile mosaic on the wall of the Celebration Center that was a replica of one they had seen in Germany.

“Jim had asked us if we could do one like it downtown,” she said. “We finished it Tuesday. The church burned Wednesday. He never even got to see it.”

David Woolery, chair of the church leadership team, said keeping the downtown facility well maintained had been a top priority for the church.

“We continually had updates and remodeling projects going on there,” Woolery said. “It was important to us. This is a big hit for the community.”

Woolery said that although the church will mourn the loss of their beautiful historic church, they will still persevere.

“We’ve lost a building, but that building wasn’t the heart of our church. Our heart is still strong,” he said.

First UMC is holding a candlelight vigil near the location of the downtown church at 7 p.m. tonight.