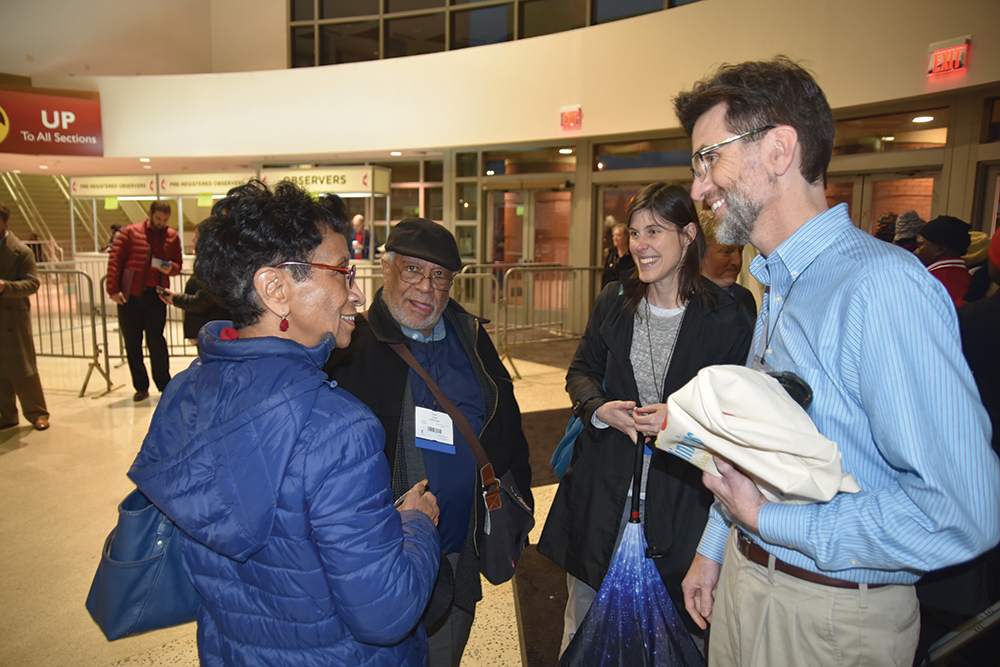 As a first-time delegate to General Conference, Rev. Andy Bryan felt the presence of the saints that come before him when session commenced on February 23. The role runs deep in his veins – he is a fifth generation General Conference delegate.

Bryan is currently pastor of Campbell UMC in Springfield, and will be moving Manchester UMC after Annual Conference this June. He was elected as an alternate delegate for the 2016 General Conference. But when Rev. Bob Farr was elected as Bishop later in the year in 2016, that bumped Bryan up the list to being a full member of the delegation.

A fifth-generation Methodist pastor, Bryan was well aware of his Methodist roots, but he only recently learned of how deep the General Conference connection runs. In a conversation with father, who was a General Conference delegate several times, he was told how many generations it goes back, and that his great-grandmother, Era (Monk) Bryan gave the opening prayer at the uniting General Conference in 1939.

At the end of the first day of General Conference, the day of prayer, Bryan felt optimistic.

Bryan knew that if Bishop Monk Bryan, his grandfather and spiritual role model, was still alive he would be on the phone with him each night, asking how it was going and offering encouragement. As Bryan considered the responsibility of the task before him, he was thinking not only of his family legacy but of the multitude of United Methodists around the world.

“I’ve been considering how I’m one of 864 delegates who is being asked to make decisions on behalf of 12 million United Methodists around the world,” he said.

As General Conference progressed Bryan’s reaction to the progression of action taken went from hopeful, to disappointed, to profound sadness. He shared the following statement on his blog during the Conference.

“I had my name in the pool to speak for a long time, but never got called … For people who value diversity, today was awful, like getting the wind knocked out of you over and over again. Tomorrow promises to be the same,” he stated on the evening of Monday, February 25. “We are working against a deeply entrenched 53-55% of the delegates who are unwilling to yield, unwilling to say that their opinion may be wrong, unwilling to see things from anyone else’s point of view. We are working against a faction who believes that it is better to be divided in ‘truth,’ even when what they think is ‘truth’ is not universally accepted as ‘truth,’ than it is to be together in ‘error,’ even when what they think is ‘error’ is really just ‘disagreement.’”