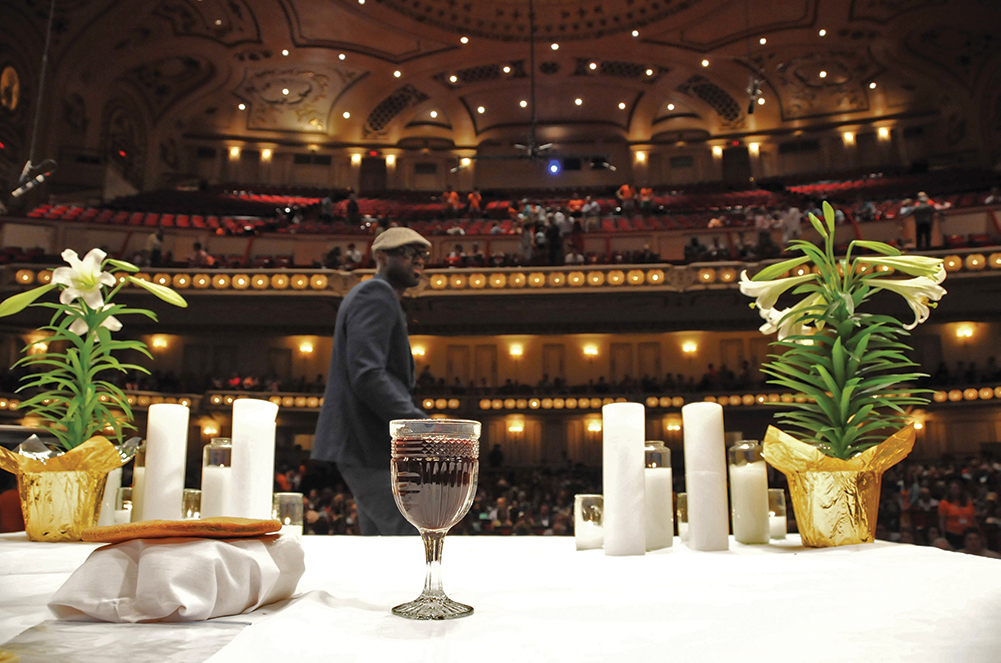 Easter is a huge day for nearly every church. It’s not unusual for a church to have double or more than it’s average attendance. For a small country church, that might mean going from 18 to 40. For a church like Wood’s Chapel in Lee’s Summit, it means going from an average of 1,270 to 3,056. Either way, the day feels different than any other day of worship, and takes special planning and preparation. The following is a look inside of what just a few Missouri Conference churches had going on this Easter.

First UMC Jefferson City added a third service for Easter morning, and had a children’s event that ran concurrently with each service, with a total attendance of 1,071. A Stations of the Cross display in the lobby was visited by 60 people during Holy Week. The Maundy Thursday service had nearly 100 in attendance.

There were 204 people who attended worship at Tebbets, Steedman and Mokane UMCs, the three churches on the River Circuit. They raised $1,500 for Imagine
No Malaria.

Community UMC in Columbia had 547 in attendance on Easter Sunday, starting with a Sonrise service on their front lawn by the three crosses. There were another couple hundred people who attended other worship experiences through the week, including two one-act plays during a Good Friday service. 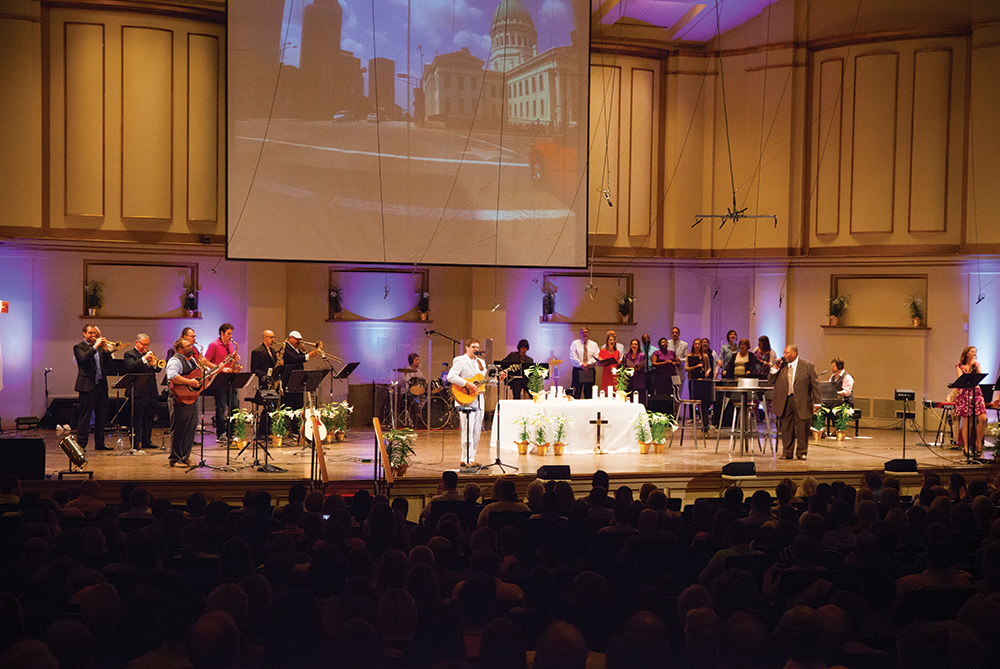 Keytesville and Dalton UMCs had a special Maundy Thursday service with a hand washing ceremony, where they discussed the way Pilate tried to wash his hands of the blood of Christ, and how as Christians they should strive to keep their hands clean of sin. On Easter Sunday Dalton had an attendance of 30, and Keytesville had 131, which may have been a record.

This year First United Methodist Church of Sedalia had its eighth Easter@theMathewson. This was the largest crowd to date with just over 2,800 people. They had professions of faith and renewals of faith as dozens of people came forward during the invitation time. The celebration draws about 13 percent of the town and 8% of the county population. Around 200 volunteers helped to put the service together in the 24 hour time period that they have to take a public space (which houses everything from rodeos and monster trucks events to indoor football and State Fair Queen coronations) and transform it into a worship space for an experience celebrating the resurrection of Jesus.

Resurrection Downtown in Kansas City held this year’s Easter Services at the Kauffman Center for the Performing Arts. They hosted 2,000 people from throughout the city at 9:00 a.m. and 11:00 a.m. The Kauffman Center is one of the most iconic buildings in Kansas City and it plays host to some of the most talented and creative artists from across the world. By hosting Easter worship there, they were able to invite people who might not ever be able to afford entry into that space, to experience the beauty of that space while celebrating the Easter message of hope and resurrection.

Saint Paul UMC in Joplin had five services, two of which were concurrent with a video venue. Attendance for the five was 1,959.

Morning Star UMC in O’Fallon had an attendance of 4,200 on Easter. That’s just its five Easter services, not counting the 900 who came to the two services on Good Friday. To make room for the crowd the church utilized technology between their auditorium and their video venue to create a completely synced service. Both bands played the same songs at the same time, and video allowed the music to be seen and heard in both rooms. For example, they sang the song, “Say Something,” by A Great Big World to set up the idea that God isn’t finished with us yet. It was performed by Mark Roach in the Auditorium and Carolyn Roach in the Venue. But the folks in the Venue could see Mark on the screens and hear his voice; and likewise, the folks in the Auditorium could see Carolyn on the screens and hear her voice.

The Easter attendance at Manchester was 3,523. They had a Holy Saturday service, then on Sunday they had a youth-led sunrise, three traditional, and one contemporary service. Each Sunday service featured multiple choirs, liturgical dance, and orchestra. One thing they did uniquely in preparation for Easter was a Palm Sunday evening concert presenting the Midwest premiere of Mark Hayes’ “Requiem,” featuring a 150 voice choir and 45-piece orchestra. 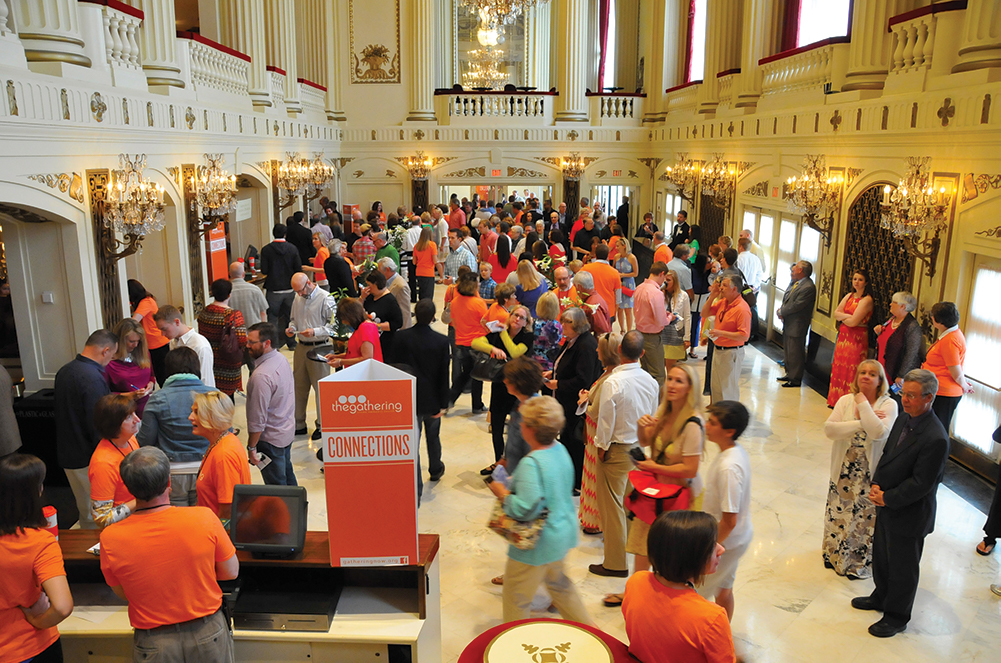 The Word at Shaw celebrated their fourth Easter this past April. Although God has been increasing their church plant's numbers every quarter since they launched in January of 2011, the first quarter of this year has seen greater growth than they've ever experienced. After an attendance of 142 on Palm Sunday, they hosted 96 at the Good Friday service, and 173 at the main service on Easter morning. The increase may have come from a couple of favorable news stories about the church leading up to Easter, along with a flyer distribution party that sent out 2,000 flyers before Easter followed by 2,000 flyers after Easter. The attendance number has continued to remain strong in the weeks following Easter as well, and they hope to carrying this momentum into the summer months.

He is Risen! was the topic of the day at Waynesville UMC. Nearly all of the 560 folks present were shouting at the top of their lungs, "He is Risen indeed!" at a minimum of 24 times per service. Easter started out with a "Sonrise" Service at Waynesville City Park at 6:15 a.m., followed by a traditional service back at the church complete with a full processional of our new acolytes. The acolytes wear albs, carry the Bible, holy water, holy oil, banners, cross, light of Christ and the elements for communion. The church confirmed eight youth after they had baptized one of them. The Assembly of God church loaned them a portable baptismal since the youth requested immersion. They ended Easter by taking their bounce house, hot dogs, popcorn and 400 Easter eggs up to our neighboring apartment complex where we invited them to an Easter Egg hunt.

The Gathering in St. Louis, a growing multi-site ministry, chose to offer one worship service on Easter. “We wanted to celebrate the resurrection in a big way and extend an invitation to experience the power of Easter,” said Senior Pastor, Matt Miofsky. Worship was held at Powell Symphony Hall in midtown St. Louis and was attended by 1,951 people.