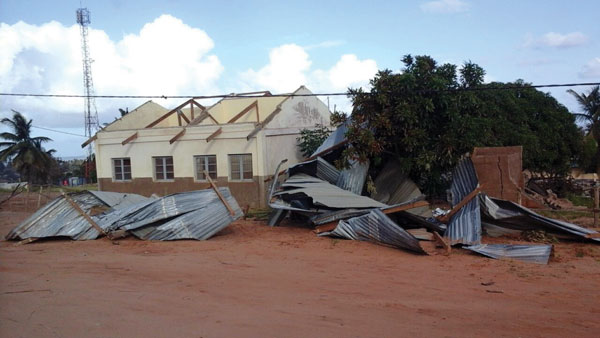 On February 15, Cyclone Dineo devastated Methodism’s heart in Mozambique. More than 100 churches and their parsonages were impacted. The historic mission stations of Cambine and Chicuque also sustained significant damage. Outside of the church, Dineo caused more than 100,000 people to be displaced in addition to the physical damage of 105 schools, 20,000 homes and 49 hospitals.

Our United Methodist connection is working to respond. UMCOR has provided initial funding for emergency food and water, and they may provide additional support. Other annual conferences and partners with the UMC in Mozambique are stepping up, focusing rebuilding efforts in the Cambine and Chicuque mission station areas.

The Missouri-Mozambique partnership is rooted on building strong churches – and that’s where we expect to make a difference in post-cyclone relief efforts. Estimates for repairing chapels and parsonages are coming in, and we expect this cost to be a minimum of $250,000 and could reach $500,000. With Bishop Farr’s leadership, MI hopes to reach this goal through offerings in your congregations during this Lenten season. Church resources and pathways to donate can be found online at www.mzinitiative.com

As churches consider and begin collecting special offerings, we celebrate our partnership and the impact that together we can make. A church building (either thatch or brick) provides a beacon of hope for a community working to grow in their relationship with Christ and each other. Our parsonages allow for a pastor to serve in their home community and live into their call to ministry. Mozambicans remain empowered and a hopeful people, even after extensive damages.

Renate Hartner, a German Methodist missionary in Cambine has reported since the storm: “We are deeply impressed, that Mozambican people do not complain in this situation, even as they lost their houses and the third harvest (first by drought, then by rain floods, now by the storm).”

I ask for your prayers and financial support for our brothers and sisters in Mozambique. In the Lenten season we go from the darkness of Good Friday to celebrating Jesus’ resurrection. Mozambicans have seen and have lived through darkness but are living into being Easter people and we have the opportunity – this Easter – to be Easter people together.