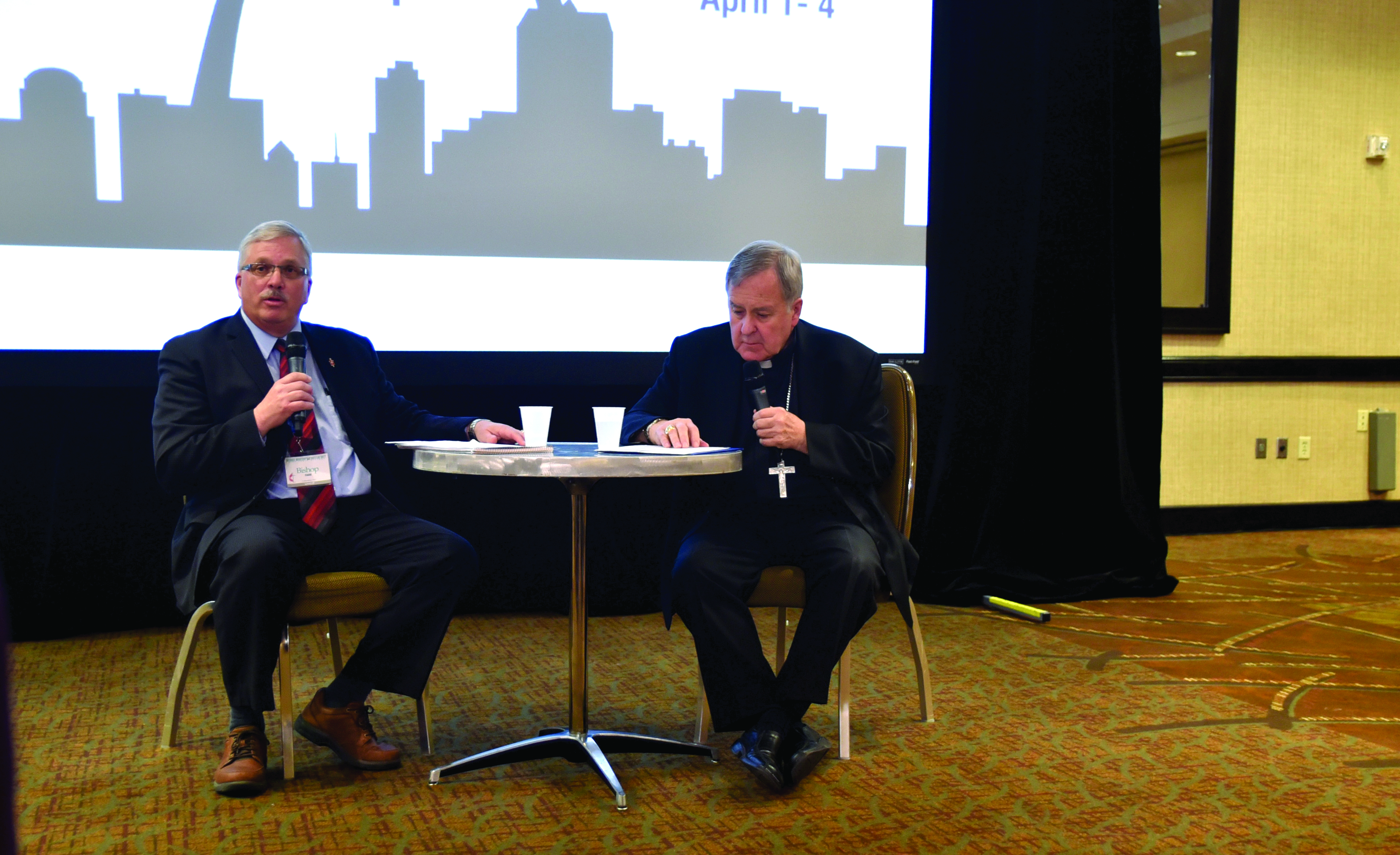 Archbishop Robert James Carlson of St. Louis and Bishop Robert Farr of the Missouri Conference sat together on a panel in St. Louis at the National Workshop on Christian Unity in the first week of April and discussed what they faced as adjudicatory leaders.

One thing that sets heavy on the hearts of each also relates to the events that brought them together: racism.

Bishop Farr described that he felt flat-footed in the midst of the riots in Ferguson following the shooting of Michael Brown. There were 60 United Methodist churches in the St. Louis area, including one in the heart of Ferguson, but knowing the appropriate response was challenging. Bishop Farr and Archbishop Carlson met during this tumultuous time and agreed they should do more to work together.

Bishop Farr said people need to act, while staying vigilant regarding the motivations of their actions.

“What are you in it for? If people think you are in it for yourself, you lose,” he said.

Even in the rigid hierarchical structure of the Catholic church, episcopal decrees have their limits.

Archbishop Carlson put out a notice to all of the priests in his dioceses wanting them to preach on the sins of racism on a certain Sunday.

Immediately one priest called him and said he couldn’t do it because it would cause such a rebellion within his congregation that it would likely be his last sermon there.

Both bishops pointed toward the segregated nature of the city of the St. Louis, and of the churches within it, as being barriers to addressing the sin of racism.

Archbishop Carlson lifted up the quote from Dr. Martin Luther King, in which he described Sunday morning at 11 a.m. as being the most segregated hour of the week in the nation.

Bishop Farr agreed, saying even the segregation within Methodism presents barriers to working together. He mentioned he has participated in the Pan-Methodist Proclamation Day service the last two years and sees few United Methodist present there.

“We don’t even know where each other’s churches are within our own state,” Bishop Farr said.

Farr said he sometimes feels inadequate to insert himself in matters of race, because he doesn’t share the same burden of discrimination that African- Americans have experienced, but that is not a reason to opt-out from addressing the sins of racism in society.

Bishop Carlson recalled a time when he was a young priest, serving one of the few African American parishes in an inner-city church in Minnesota. He was nervous and talking too much. A parishioner let him know.

“She said, ‘Honey, if you want to learn something you’d better hush-up,’” he recalled.

Bishop Farr said he encourages his clergy to develop relationships. One pastor just out of college was eager to start a multi-cultural church. When he queried him about how he had reached out in his personal life and formed friendships that crossed cultural lines, he found he had not done this at all.

“He wasn’t ready to start a multi-cultural church,” Bishop Farr said. “I told him to make 10 friends and call me back.”

Both Bishops pointed toward their friendship as one way to reach out to form a relationship outside of normal channels and said intentional efforts need to be made to cross not just denominational lines, but also lines of race, class and other societal barriers.

“This is my 41st year of ministry, and I know it is so easy to get pigeon-holed and caught up in just minding your own store,” Bishop Farr said.