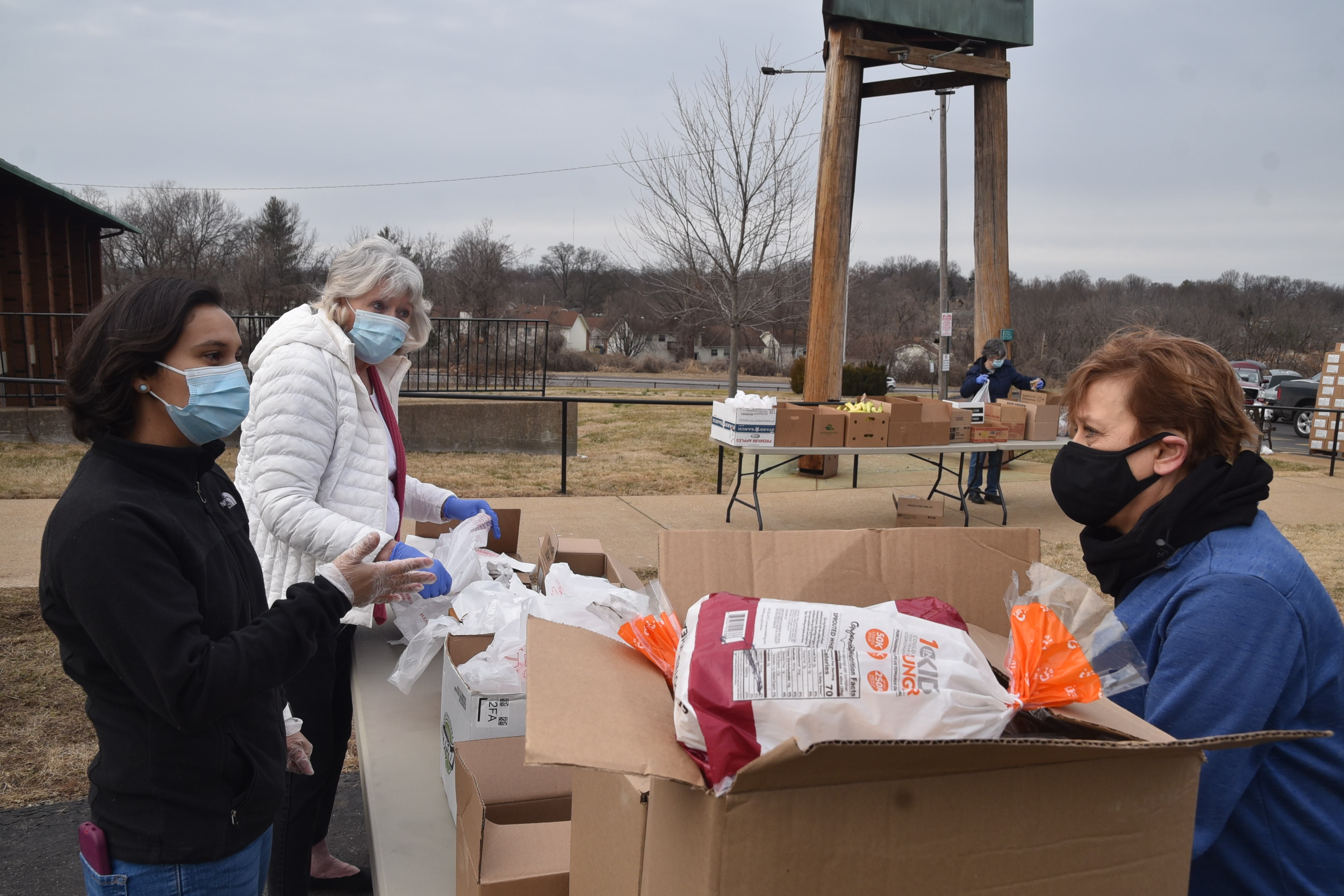 Every Thursday cars fill the parking lot of Zion UMC on the south side of St. Louis. On Tuesdays cars line up down the street from New Covenant UMC. People are there for the same reason: to receive free food.

The food distribution is coordinated by Nourish Community, an organization that was originally part of the Missouri summer food program for school children. It adapted in May of 2020 to meet broader nutritional needs during the pandemic year-round. The United Methodist churches

are two of the 13 food distribution sites that Nourish Community has established.

“The need is ever-increasing,” said Nourish Community organizer Stacey Pugh. “We also try to provide people with PPE (personal protective equipment like masks and hand sanitizer), but we never have enough.”

Rev. Elsie Lisbeth Quintanilla-Perez is the pastor of the two churches. With congregations that are largely made up of retired people, she did not see a large increase in need among her church members due to the pandemic. That was not the case with her husband, Rev. Jose Marino Chacon Mayorga, who is pastor of the Spanish-language church, La Trinidad.

“We have a lot of people who work in restaurants, at hotels or clean houses, and many of those jobs were shut down during the pandemic,” Chacon said.

Chacon said previously much of the congregation has had difficulty relating to each other. They share the Spanish language, but they have different cultures because they are from various places in Mexico, Latin America and South America. But during the economic downturn, those differences fell away.

“In that moment, the church united as a family,” Chacon said. “They started really looking out for each other and checking in with each other, regardless of where they were from.”

Employment has improved some for people at La Trinidad, but economic recovery for the city has a long way to go.

On February 25, the couple started loading cars promptly at 4 p.m., as they do each week. Quintanilla and Chacon are both personally hands-on with the food distribution, preparing at the churches well in advance. Other volunteers start arriving just after 3 p.m. The first cars in line have already been there for an hour. They are hustling, with Chacon moving at a run much of the time, carrying three boxes or two bags of food.

“It’s a lot of work but it’s a blessing for many people,” he said.

Quintanilla works outside with volunteers preparing bags of food. They are organized and very efficient in their process, but the line doesn't get shorter. Cars keep arriving faster than they are leaving. Within a few minutes, 100 meals are gone. Within half an hour all 300 food boxes have been distributed. Cars are still in line.

“When we run out of the food boxes from Nourish, we put together food bags from our food pantry here at Zion,” Quintanilla said. Several partner churches helped Zion stock the food pantry initially. Zion, New Covenant, Concord Trinity and Kirkwood continue to keep it stocked.

Janet Jackson is working with Quintanilla. She has been attending Zion for 17 years.

“When we moved here from the city, we were looking for a church, and we were welcomed here by this man named Joe who was the nicest, most welcoming person you ever met,” she said. “He was so welcoming that we’re still here.”

They were joined by Julie Bagsby. Bagsby lives nearby, and when she heard the church was doing food distributions she came to volunteer. She is there every Thursday now, and has been coming back on Sundays.

“I used to be a Methodist, then I became a Catholic, but I’ve started attending here now,” she said.

Volunteers also come from Concord Trinity, The Connexion and The Gathering United Methodist churches. The National Guard sends a few troops to help with each food distribution as well.

Each family gets a box with five lunches, a gallon of milk and fresh fruit. The meal kit is put together to feed a child for seven days, and the amount of food someone receives is based on the number of people in the family. There is no eligibility requirement or proof of income or address.