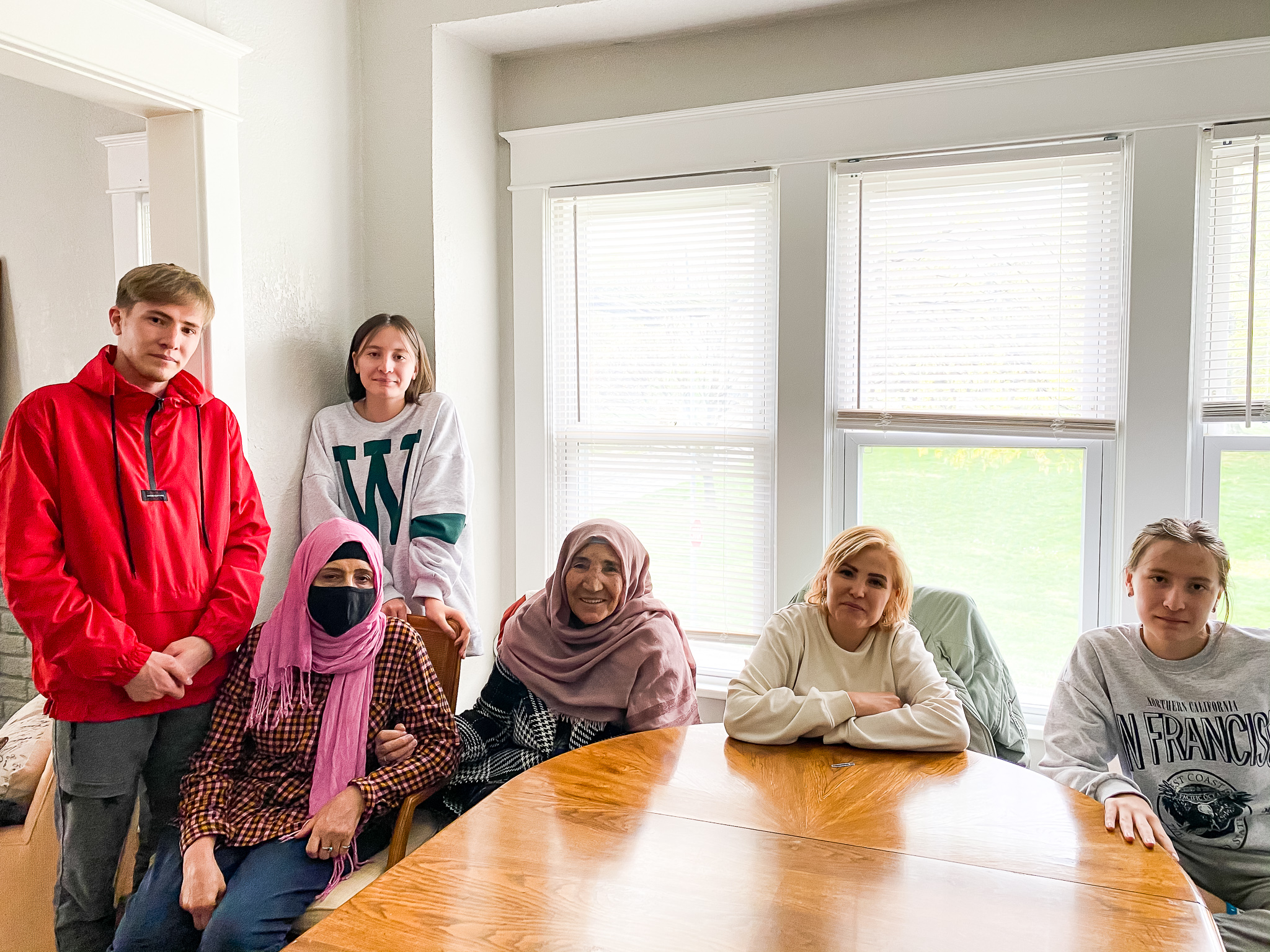 The U.S. military completed its withdrawal from Afghanistan on August 30, concluding its 20-year war there. The country watched the capital city of Kabul fall into chaos during the final stages of the withdrawal. On August 26, 13 U.S. service members were killed in a suicide bombing as they screened evacuees outside the Hamid Karzai International Airport in Kabul.

The military withdrawal coincided with Operation Allies Refuge. This United States military operation airlifted certain at-risk Afghan civilians, particularly interpreters, U.S. embassy employees and other prospective Special Immigrant Visa applicants from Afghanistan. U.S. personnel also helped NATO and regional allies in their respective evacuation efforts from Kabul. The operation was concurrent with the larger American military withdrawal from Afghanistan and the multinational evacuation of eligible foreigners and vulnerable Afghans. SIV applicants were airlifted to the United States, where the U.S. military temporarily housed roughly 75,000 while they completed their SIV requirements.

Having that many refugees present in the U.S. in immediate need of resettlement is a very different process than the typical process of admitting refugees from refugee camps, which can take years and usually involves a small number of people at a time. The sudden change has created challenges for resettlement agencies and opportunities for the churches that support them.

Linda Robb was part of a small group at Missouri UMC in Columbia that was motivated to help with the situation, so they approached the pastor and formed a team.

“Many people in the church are moved by the situation and want to help,” Robb said. “Just imagine if you landed in another country with a different culture and you had nothing.”

They learned that Catholic Charities is the resettlement organization for central and northern Missouri.

Melissa Clark volunteered to be the mission contact with Catholic Charities and organized about 30 other volunteers into ten teams.

“I’ve connected with people in the church who want to help who I didn’t even know before this,” Clark said.

Three people from the church participated in a six-hour training at Catholic Charities. Then on October 22, Catholic Charities brought the training to the church and 25 people. People are also participating in a mandatory two-hour online training.
The church will initially be sponsoring one family and is the first church in Columbia to do so. They will be matched with a large family since they have ample volunteer resources. The church can donate the family a maximum of $4,000 to help initially with rent, a security deposit, hooking up utilities and other expenses associated with establishing a residence.

Rev. Troy Bowers, the senior pastor at Missouri, is encouraged by the church’s enthusiasm to help.

“As a pastor, I’m thrilled to be serving a church that has a history and legacy in mission,” Bowers said.

“We want to be their community, not their savior. The strongest relationships are forged in giving and take, and you learn from each other’s experience.”

As plans were being made in Columbia, about 30 miles east, members of the Rotary Club in Fulton quickly responded and organized a community meeting to seek partners to aid in Afghan resettlement. Mona Bartley is on the mission and outreach committee at Court Street UMC. She went to the community meeting said it “struck a chord.”

“Jesus loves you and loves all of the children of the world. That’s what we’re doing here. We’re taking them the love of Jesus,” Bartley said.
The Phi Delta Theta fraternity at Westminster College in Fulton has donated the use of an empty duplex for a family until next July. Sue Lippincott of Court Street was part of a team that cleaned up the house in preparation for the family’s arrival. The local Christian church uses a storage area to collect furniture and bedding for the home.

The two women from Court Street completed the 31-page application for volunteers, submitted to background checks and did a training that they described as the Catholic Charities version of the United Methodist Safe Gatherings process. The church was told to expect a couple with nine children, ranging from two to 18 years old.

One other large family was already temporarily resettled in Fulton temporarily in late October. They have seven children, including one that is four weeks old who was born in the U.S.

“The goal is to get them to self-sufficiency as quickly as possible,” Lippincott said. “The timing is good because there are a lot of employment opportunities in Fulton now.”

Bartley is part of the education committee for the resettlement team. A former teacher and school librarian, she is taking an English as a Second Language course with Catholic Charities to assist the families. It’s a situation she’s been in before. “In my 30 years with the school, we always had a few children who didn’t speak English,” she said.

Dan Lester is executive director of Catholic Charities of Central and Northern Missouri, a 38-county area. The organization has been helping refugees resettle in the area for over 40 years and initially worked primarily with people from Vietnam and other regions in Southeast Asia and the Middle East. But the current process with people from Afghanistan is different in some fundamental ways.

“Realistically, I think we will likely still be receiving people in January, February or even March,” Lester said.

After the refugees move in, there’s more work to do. They need assistance enrolling in school, finding jobs, establishing a family doctor … starting anew with every aspect of life.

When Catholic Charities partner in the federal government asked them how many refugees they could handle in central Missouri, they told them 300. Opening up to that many means they need a lot of support from other churches and organizations.

“We can only do so much. Community sponsorships are a key component of our plan,” Lester said. “Getting faith groups involved with this is critical.”

It marks instead, it the entire process goes better.

“When we have more faith groups involved, the families have more community ties,” Lester said. “Those ties help them achieve the greatest independence possible as quickly as possible and helps them move successfully to the ultimate goal of them having a comfortable, safe, happy home.”

Typically, refugees being resettled may have some ties to a community, like a family member or previous employer. But in this case, there has been little Afghanistan resettlement to occur in Missouri before now, so in most cases there is no preexisting ties to the community.
As of the end of the first week of November, there had been 60 people from Afghanistan resettled in central Missouri, or about 20% of what is expected. Churches can sponsor families, or individuals can volunteer on their own.

“We need a broad range of volunteers and skills, from things like cooking their first dinner in their new home, teaching English as a second language or providing transportation to a new job,” Lester said.

“This is a beautiful example of multiple faith-based groups coming together with federal and state agencies to do life-saving work. Collaboration is making a real difference.”

Refugee resettlement is one of the primary charges of Della Lamb Community Services, a national mission institution of the United Methodist Women in Kansas City. Executive Director Ryan Hudnall said, before the military withdrawal, they had been working with some refugees from Afghanistan who had assisted U.S. military forces and obtained a special immigration visa, but it was limited.

“We had resettled fewer than 25 refugees from Afghanistan in recent years. But we are expecting 300 to 350 by February,” he said.

They have helped about 30 Afghanistan refugees resettle in the area as part of this process. However, Hudnall says they have already encountered some unique needs. One situation was eight cases linked together through extended family ties, totaling 22 people, so finding housing that was close together was a challenge. Another case was an individual who had recently had heart surgery and spoke a different dialect than the other people. The biggest overall challenge has been the very short lead time between notification of a family coming and their arrival.

The second week of November was a critical week for Della Lamb because they received a large file of information about all of the families they were expected to receive.

Before the U.S. exit of Afghanistan, Della Lamb had already worked to build more community sponsorship as part of its refugee resettlement process. As a result, Platte Woods United Methodist Church became more involved in the spring of 2021.

“Through household donation drives and building our team of volunteers, we’ve helped to fully furnish two homes,” Platte Woods UMC Director of Missions Brandi Molina said. “We are currently working on training with Della Lamb to develop a cosponsorship with additional families, providing us the opportunity to build relationships with the families we work with and support them as they make Kansas City their new home.”

Molina said having the Afghanistan refugee resettlement in the news has increased interest within the congregation and led to more volunteers. The church’s goal is to help the families achieve self-sufficiency and have good lives in their new homes. Hudnall says having more people on hand that are intentional about a loving, welcoming presence is essential.

“The second tragedy of resettlement is often the isolation and loneliness refugees experience when they arrive at their new home,” Hudnall said. “There are so many opportunities here to love our neighbor.”

As with mid-Missouri, affordable housing in the Kansas City area is a challenge, especially when considering the proximity to work, schools, and public transportation and the available housing quality. When people arrive very quickly, it may be necessary to house them in hotel rooms, but that presents a challenge with meals when the new arrivals don’t have access to a kitchen. As Della Lamb gears up to meet what is expected to be a sudden influx of refugees, Hudnall is grateful for the community response they’ve received.
“Churches across many denominational lines have responded,” he said. “In recent years, we’ve had challenges with some of the rhetoric around immigration, but this doesn’t have to be a polarizing issue. So many churches are using this time to say, ‘Who is my neighbor?’ and ‘How do I love them?’”