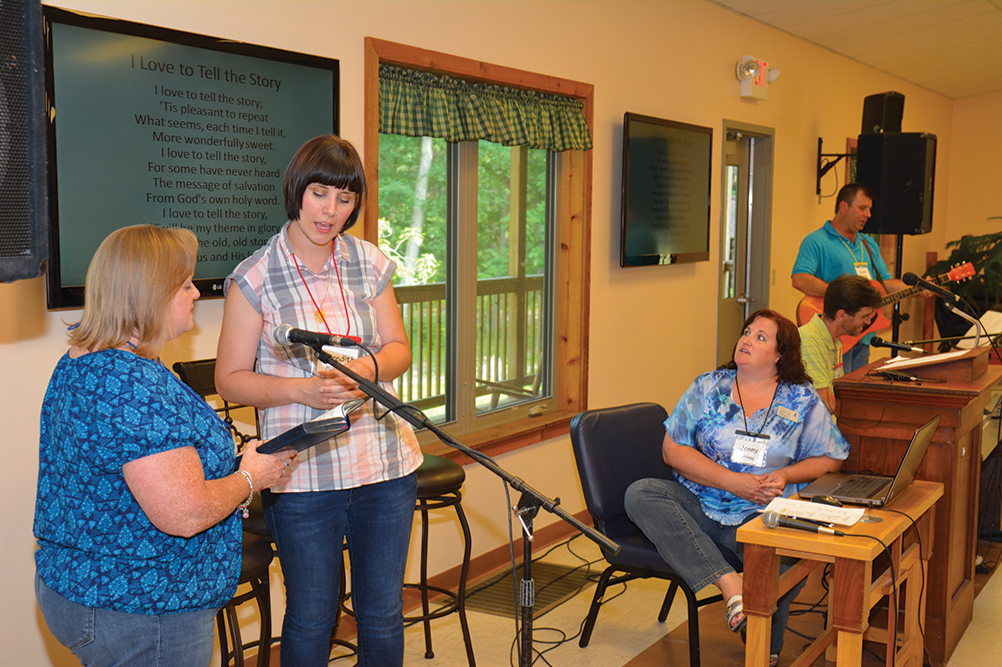 Rev. Bruce Baxter discerned his call to ministry when he was painting a house. He immediately came up with three good reasons why a career in ministry was not for him, but his pastor recommended that he enter this new “candidacy” process.

The event started in the manner of traditional worship, with a welcome, songs, scriptures, joys and concerns, passing of the peace and call and response prayer.

About 40 people participated in the event, which was for prospective elders, deacons, local pastors and people who had not yet discerned where their call to ministry would lead them. People were present from all parts of the Conference, and most of the largest churches in the Conference had someone participating.

Rev. Andy Bryan, who was leading worship, told how he was a choir director for five years at a Presbyterian church before he heard the call to become a pastor.

“Those five years were a gift,” he said. “I wasn’t waiting, I was in active ministry. Many of my classmates at Saint Paul School of Theology dropped out before their first semester was over. They rushed into seminary, thinking it was a time of discernment, and got burned out. I went there in response to my call, not to discern it.”

Bryan related that he also had classmates who hadn’t rushed into anything. “They were in their 60s, and expressed regret that they hadn’t started sooner,” he said. “Somewhere in the middle of rushing in and waiting too long is the sweet spot of discerning your call.”

Those present represented the diversity of churches in the Missouri Conference. At one table of four there were candidates from Webster Groves, Lee’s Summit, Joplin and Chillicothe.

The goals of the summit are to allow time for prayerful discernment, and allow candidates to connect with other candidates who are going through the same discernment process.

Missouri Conference Director of Pastoral Excellence Karen Hayden noted that some of those attending the event had been looking forward to this first step for a long time, and some arrived rather suddenly. She assured them that either way is acceptable.

“Some of you are sure why you’re here, and some are at the starting block not knowing if you want to run this race,” Hayden said. “You all have everything you need to be here today.”

The next Candidacy Summit will be January 16 – 18 at the Missouri Conference Center in Columbia.