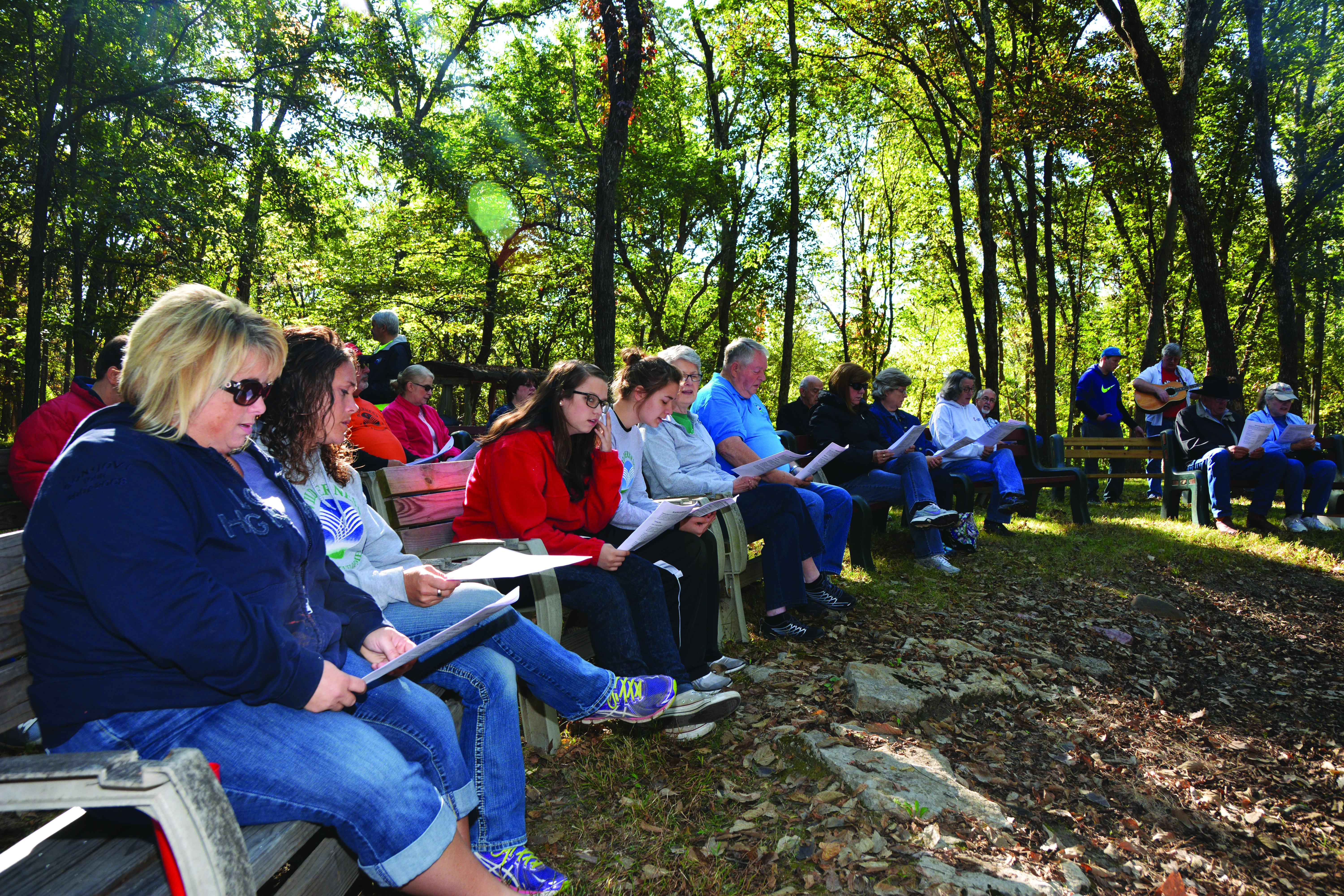 This past June the Missouri Annual Conference voted to sell three of the four Missouri Conference-owned camps. The camps were decommissioned in early October, and put up for auction on October 21.

On October 3, about 100 people gathered around the campfire at Wilderness Retreat and Development Center. Benches were arranged in a circle, with crosses on each side of the circle.

“The crosses represent how we brought our sons and daughters here from the North, South, East and West,” said Rev. Jenn Klein.

“There were not hundreds, but thousands of them. Many of them met Jesus here, some of them for the first time.”

Prayers were given by two youth from Lawson UMC, the closest United Methodist Church to the camp. Northwest District Superintendent Cindy Buhman brought a message from Bishop Robert Schnase.

“As you gather this morning at Wilderness, I am aware that many of you are experiencing loss and seeking God’s healing love as you more forward,” his message stated.

“You continue to be in my prayers and I hope that this opportunity to gather in worship together will be a source of hope and healing for you.”

Dennis Hisek, former director of the camp, told everyone to take a deep breath, and take a moment to give thanks for all of the wonderful things that had happened at the camp.

“I love hearing laughter here today, because that’s what this place is about – joy and laughter,” Hisek said.

Klein prayed for a transformation to take place so that people may accept the grounds as God’s.

“Fifty years ago God had a plan for this place. We have witnessed it, and experienced it. Hearts have exploded with God’s love here, and been sent back out into the world,” Klein said.

Klein said they struggled with the word “decommissioning” in planning the worship service, because hearing the word really hurts.

“God commissioned this camp 50 years ago. We commission it now to be blessed in the next thing, even though we don’t know what that will be yet,” she said.

“It’s the gospel story, one of life, death and resurrection. We’re trusting in God. We believe God is at work, even if we don’t know what’s next.”

In the 50 years of the camp, there were only two site directors. The first was Robert Wayne Cleveland, serving from 1964 – 1985. When Cleveland died his ashes were scattered at the camp. His children, Brett and Michelle, had grown up at the camp, and were there for the decommissioning.

Rev. Andy Bryan made the comment that everyone knows the platitude, when God closes one door he opens another.

“I don’t believe it for a second, because I don’t believe God is in the door closing business,” Bryan said. “But when we come up against a wall, we can find that God has already opened a door for us somewhere else.”

At 10 a.m. on October 10, people gathered at the tabernacle, also known as “The Big Slab”, to pay tribute to Camp Galilee. “We’re here to celebrate the legacy of these grounds,” said Rev. Melissa Dodd.

Rev. Jon Spaulding of the Missouri Camping and Retreat Ministries Board told how he had came to the camp for the first time when he was in the second grade, taking a bus with children he didn’t know from other churches all the way across the state.

A 10-page document on the history of the beginnings of Camp Galilee from 1944 – 1955, written by Rev. Keith Berry, was shared with those gathered.

Spaulding noted that the camp was proposed in 1944, when the Southwest Missouri Conference was only five years old and the country was in the midst of World War II. The location was debated for years. The purpose was “…to make possible one of the most effective methods of influencing youth to follow Christ.”

Rev. Ross Fulton recalled camping at Galilee before any structures had been built.

“There was nothing here but copperheads, ticks and chiggers,” he said. One of those copperheads found its way inside of his sister’s tent.

Through the years, the original 93 acres that were purchased were added to, bringing the present acreage total to 191.

There are now more than 20 structures on the property.

Dodd said she came to the camp for the first time in junior high, feeling awkward and shy. When she was getting dropped off, she wondered if she would be able to make it there for a whole week on her own. Over the years she went on to spend a total of 21 weeks of her life at the camp.

“I’m still shy, but what God has done through this place to me is indescribable,” she said. “A lot has happened here that can’t be summed up in words – only in memories.”

Dodd said the transformations that occurred at the camp went on to impact the lives of people in immeasurable ways.

“What God did here, whether it was 60 years ago, or 16 months ago, was never meant to stop at the gate, but to go out for the transformation of the world,” she said.

Southwest District Superintendent Mark Statler said Camp Galilee was a sacred place to him when he spent a week there for the first time in 1985 with 25 other junior high kids, and has continued to be sacred through the years as he came back. He described it as a place where he observed as mysterious God made real, a holy God made accessible and the extraordinary became ordinary.

“It’s not so much the ground here that is holy – it’s the people and the experiences that are holy,” Statler said. “God isn’t about to stop doing that.”

At 3:30 p.m. on Sunday, October 11, people joined together at Blue Mountain Camp and Retreat Center to celebrate the ministry that had taken place at that site.

The gathering opened with music led by Chris Nall, who had provided music for many Blue Mountain camps, and Epworth camps as well. Rev. Kent Wilfong of Doniphan and Neelyville UMC welcomed people to the camp, and Rev. James Sanderson, a retired elder and former director of camping ministries for the Missouri East Conference, opened with prayer.

Karen Shanks, Director of Adventure Camp, offered a litany of Thanksgiving that was written by Rev. Andy Bryan and read at every camp.

“For the joy of new believers confessing faith in Christ, for the conviction of those who have heard God call them into ministry, for the celebration of the sacrament that nourishes many in faith...” the litany read in part.

At the conclusion of the service, people were asked to take a small rock and throw it into the lake. As they watched the ripples fan out from the splash, they were to reflect on what God has done through them because of the camp.

“All that has been commissioned to be used by God should create a ripple that goes from the source out into world,” Wilfong said. “Blue Mountain was commissioned to create a ripple. What took place here was never meant to stay here. God moved in this place to move out from this place. May we live the ripple in our lives, showing who God is to the world.”
News