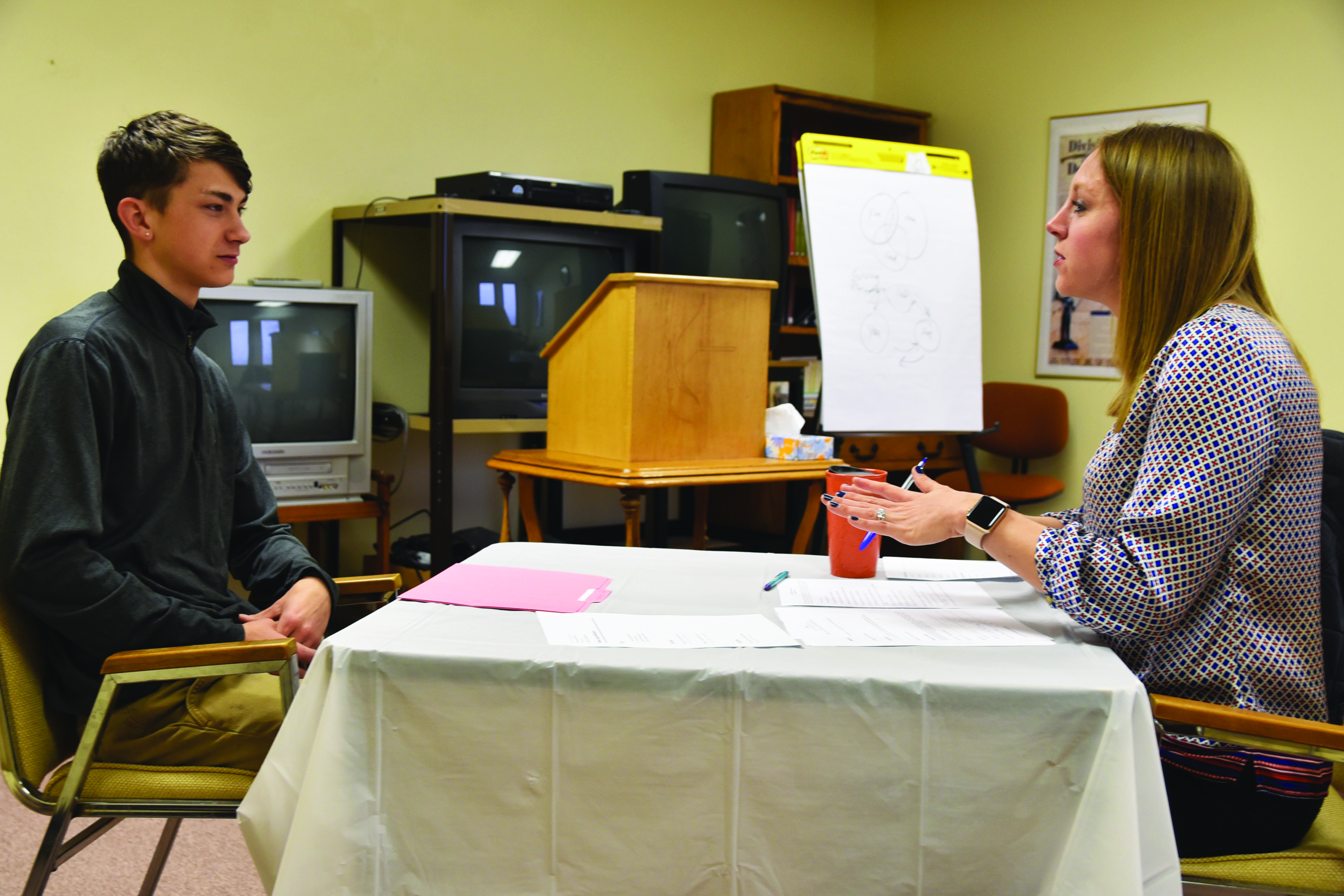 “What have you accomplished that you are most proud of?” she asked the 16 year-old.

“Well, I’ve been sober for quite a while,” he responded. “I used to drink and do drugs a lot, but I haven’t now for about a year.”

In the classroom next door another interviewer queried a different 16 year-old.

“Here’s just a light, fun question: If you could be any person for day, like a celebrity or someone from history, who would it be?”

“Really, that’s interesting. Why your girlfriend?” she asked.

Down the hall, a manager of home care services interviewed a third young man.

“Tell me about a stressful time in your life and how you dealt with it,” he said.

“Just the other week, when my brother was arrested and taken to jail. That was really stressful,” he said. “I guess I dealt with it by forgiving him, but I haven’t told him I forgive him. I’m not ready for that yet.”

A fourth teenager began each interview by explaining to the interviewer that the disfigurement of his face was the result of a suicide attempt.

These four were a small sample of 25 students from the Wildcat Academy, who participated in mock interviews that day. The alternative school is a place where many of the high school students are grappling with adult problems. For the past four years, Harrisonville UMC has been extending a hand to help.

The mock job interviews are a big aspect of the church-school partnership that occur in April. The church recruits volunteers from the community to interview the students as though they were interviewing them for a job, and then provide them with some coaching on how they could more strongly present themselves in an interview.

The process is very organized. The interviewers are given a list of questions they can ask, score sheets for each student they interview and a schedule to follow. Doors are kept open and a hall monitor keeps people moving to ensure the schedule is followed. Although the interviews are just for practice, there have been students hired from the process. Local labor union representatives participate, and students have been hired into union jobs from making contacts through the program. One year they took the students to visit a chiropractor to learn about his business. Now one of the students from that group is about to complete chiropractor school.

The interviews and vocational connections are just a small part of the partnership between the church and school. Initially volunteers from the church went to the school, but now the students take the school van over to the church each month for the day. It’s a low-key time of relaxation and relationship-building most months, with celebrations for 90 percent or better attendance and birthdays.

Rev. Kevin Shelton found the school very willing to accept a partner. “There wasn’t really any separation of church and state issues here. They gave us a lot of leeway,” Shelton said.

The church volunteers do recognize that they are they to support the students, not convert them. Shelton says the volunteers in the school partnership program have built relationships with the students and their families.

“We weren’t reaching them any other way,” he said. People who otherwise would have remained strangers now have a friendly relationship when they see each other around town.

The church initially started partnering with the Wildcat Academy four years ago as part of the Bright Futures program. Bright Futures is an initiative that started at Joplin and is now in many schools around the state. The organization strives to help students achieve success by matching student needs with resources through partnerships between the schools and the community.

“A lot of these kids are working jobs, or have babies, or have other issues that make participation in a regular school especially challenging,” said Liz Morse, Harrisonville UMC Wildcat Academy team leader. “The school has told us they’ve noticed a difference due to our positive influence. We enjoy building these relationships. It’s a win/win.”
During the monthly visits to the church the students can work on art projects, play sports or just spend time talking with the adults. Sometimes there are special themes, like teaching the students how to make a Thanksgiving dinner.

“Being at the church puts the teachers in a different environment with the students and helps them build relationships,” Morse said. “This has been a positive thing for the church and school from the get-go. It doesn’t take them much to do it. We have five to six volunteers making a one day a month commitment to be here. Once you get it planned it’s really not a lot of work.”

As a graduation gift, the church give the students a Bible, movie gift certificate and roses. When the program first started, the graduation celebration at the church was the only graduation the Wildcat Academy students. Now, they are also allowed to participate in the graduation ceremony at the high school.

“These kids are in a system where they are looked upon with suspicion,” Shelton said. “The issues these kids are dealing with tend to be the same poverty-related issues that you can find all over Missouri.”

Morse said as the school’s relationship between the church matures, it has continued to be an uplifting ministry for the volunteers involved as well as the students, with its overall purpose meeting a basic need that every young person has.

“Our goal is for our volunteers to be positive, loving role models,” Morse said.