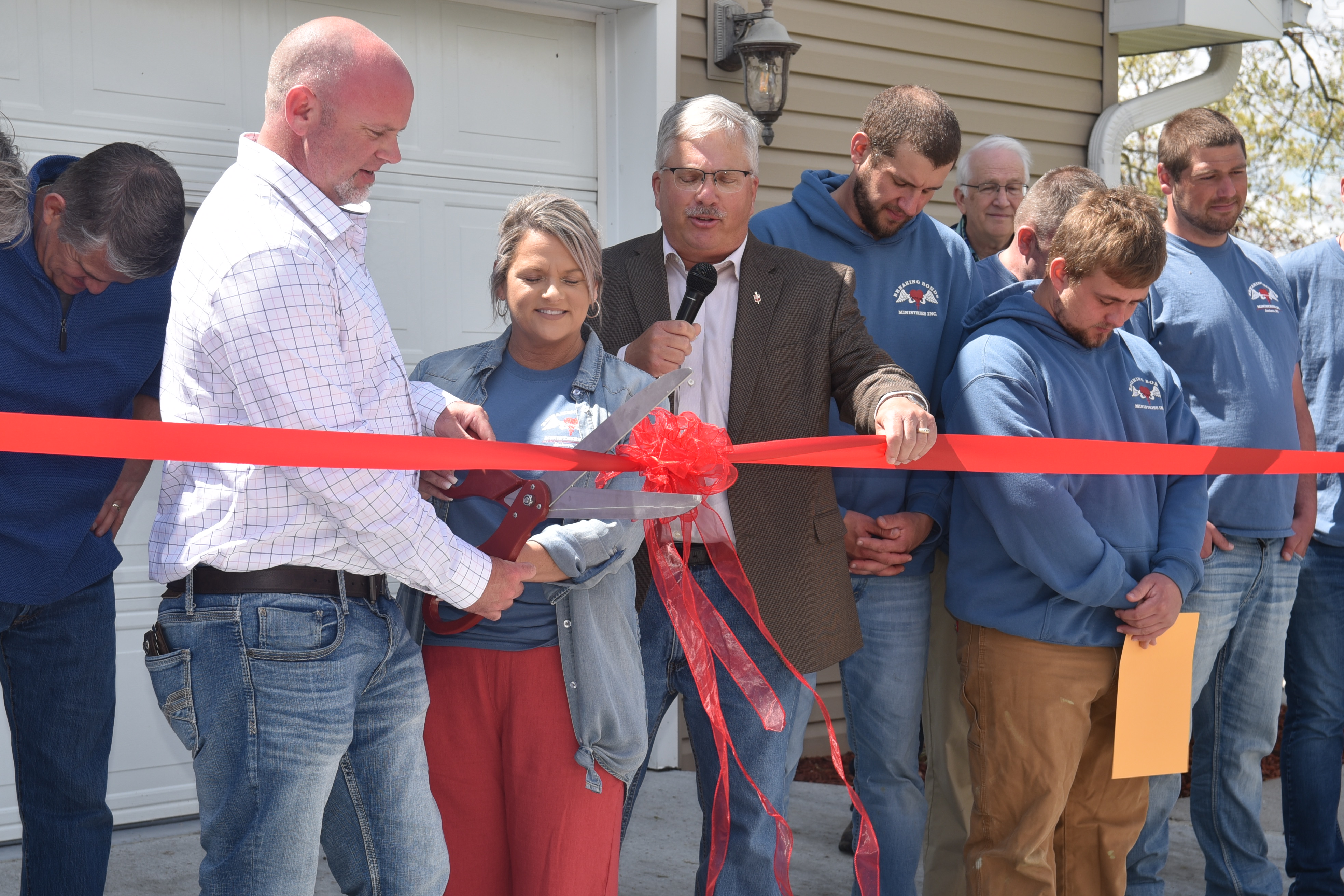 Brandon Murphy was struggling with addiction. “I had tried everything I could think of,” he said. “I was raised in church. I went to my Dad’s grave, and said, ‘I need help.’”

His search for help led him to Breaking Bonds ministry, where he studied the Bible and learned to be obedient. Through his own recovery with

the Breaking Bonds ministry in Arkansas, Murphy discerned that God was calling him to lead a recovery ministry himself.

That was about three years ago. Now Brandon and his wife Michelle have moved to Jackson, Missouri, to be directors of a new Breaking Bonds campus that is partnered with New McKendree UMC in Jackson.

The program is seven months long and divided into three phases. For the first few months in the program, the men spend most of their time in the bible. In months four to six, they focus on life skills, and the last month is aimed at forming a sustainable exit plan. They try to get things like driver’s licenses reinstated and court issues resolved.

“We don’t want them to leave the ministry with a list of things that they have got to immediately deal with,” Murphy said. “We take care of all of that while they are here.”

Murphy now sees his own story reflected in the lives of the men who come to Breaking Bonds ministry seeking help. Men like Aaron Littlefield.
“I was in a bad place, making poor decisions, did a lot of drugs since I was 13. This past six months was the longest I’ve been sober since I was 13 years old,” Littlefield said of his decision to seek rehabilitation.

Littlefield’s friend recommended he go to the John 3:16 ministry, but he couldn’t get into it, so he tried Breaking Bonds.

Littlefield had tried 12-step programs but grew tired of everything being framed in terms of a “higher power” or “man upstairs.”

“Being raised in church, and going away from it, I knew the answer was to come back to Christ and fully devote my life,” he said.

Littlefield is now considering staying on as staff with Breaking Bonds. He graduated April 13.

“This is a loving brotherhood,” Littlefield said. “Most of us come from a life where everyone is judging you. Here people see you for who you are.”

Gavin Musgrave spent four months with Breaking Bonds in Jonesboro before relocating to Jackson. He had kicked drugs a couple of years ago but was still drinking. He was in a car accident, and the court ordered him to a rehab program, which was an answered prayer.

“When I was in jail, I prayed to God. I asked him if he wanted me to go to a rehab, that he court order it,” he said.
He also applied for the John 3:16 ministry but wasn’t accepted, so he ended up at Breaking Bonds.

“Living here humbles you, and everyone could use a little humility,” he said. “They bring the Holy Spirit into it, and it’s all centered around Christ. When the Holy Spirit is ushered in it changes things. I was raised in church. I went to the camps. But I didn’t know how to live my life for Christ. We’re all broken. We all need Christ.”

He describes Breaking Bonds as the most impressive place he has ever been.

“What I didn’t know, what Breaking Bonds has taught me, is how to live for God,” he said. “I’ve picked up how to live for Christ and what he wants as far as being a disciple. It’s kind of a standard to go by for the rest of my life. You can’t ask for a better result.”

Jake Payne’s grandparents go to a United Methodist Church, and they encouraged him to go to Breaking Bonds to get help. He’s three months into the program. It is the seventh treatment center that he has been to.

“This is the best one,” he said. “The people here really care about you. And the Holy Spirit moves through this place like crazy.”

Nate Solomon agrees. He was the first local man to go to the Breaking Bonds ministry in Missouri. He grew up about four miles from the center.
“I thought I’d give it a shot, although I was skeptical coming in,” he said. “It takes a little open-mindedness to go through this.”

The new location for Breaking Bonds near Jackson, and their partnership with New McKendree UMC, has been in the works for a while. Murphy was part of the original talks in 2019.

Progress slowed, but it didn’t stop. It helped that Breaking Bonds had an enthusiastic partner waiting in the lurch for the new location.

Southeast District Superintendent Bruce Baxter met Breaking Bonds founder Casey Turner when he was attending his mandatory class at licensing school, sitting in the back row. He saw the light in his eyes. After completing licensing school, Casey Turner was serving as a licensed local pastor at Jonesboro United Methodist Church in Arkansas.

Casey and his wife, Tiffany, had worked with recovery ministries at the church in Jonesboro.
“We were failing miserably,” he said. “It was a revolving door.”

Turner could see that the men trying to break free from their addictions needed some space to make a separation from the life they were living, and they needed to be in an intensely spiritual and supportive environment for a while. Going to a meeting for an hour or two a few nights a week wasn’t enough for a lot of people in the grips of addiction to make the change and residential treatment facilities were too expensive for most people to even consider.

He worked to develop Breaking Bonds so residential treatment would be available to people who may not be able to afford it.
Once the facility was operational he started seeing a difference right away.

“Our success rate with our other recovery ministries was about 5%, and with Breaking Bonds it’s been about 80%,” Turner said. “This is a discipleship ministry of a recovery community.”

Baxter remembered Turner, was familiar with his work and thought that New McKendree in Jackson was well-positioned to partner with the ministry.

New McKendree started considering becoming a franchise location for Breaking Bonds in 2019 and was moving toward making that happen when the pandemic hit. When Rev. Bryan Wendling put the idea of Breaking Bonds to a vote in the congregation, the decision was unanimous. Four residents from the Arkansas program moved up to the New McKendree site. Soon more were locally sourced. On Sundays the residents attend worship at New McKendree, and the resident’s families come as well so they can be with them.

“That puts about 40 more people in worship,” Wendling said, noting that it adds energy to the experience. “They are part of our family.”
The program received a $100,000 grant from Congregational Excellence and another $50,000 grant from the Southeast District to get started.

Being part of Breaking Bonds fits well with the mission of New McKendree United Methodist Church.

“If we think of what it means to be a disciple, it is to take Christ’s light into the darkness. I can’t think of many places darker than the world of addiction. This is an opportunity for us to go and kick in that door, and give people an opportunity to come and not just be healed of addiction, but also replace that with a relationship with Jesus Christ,” Wendling said.
It has been a rewarding experience for the church.

“Often in ministry you sow seeds and don’t see the result, but we’ve just been at this a short while and have already seen the fruit of transformed lives,” Wendling said. “The change is palpable.

You see a physical change in these men after they come clean from alcohol and drugs. Finally, they get to a place where they look in the mirror and they don’t see an addict staring back at them, they see a child of God, who is loved, and worthy of being loved.”

The house where Breaking Bonds is located has a new feel and is perched atop a hill overlooking a picturesque countryside.

“I didn’t know what to expect in taking a ministry and partnering with a church, but let me tell you, this has far exceeded what I ever imagined,” Murphy said. “It fits us like a hand in a glove.”

The men work a few days a week on jobs in the community, and the compensation goes to fund the facility. Many of the men stay on the same jobs and just move up to full-time when they graduate from the program.
On Mondays the men are in Bible study for six hours. It is led by men from New McKendree. New McKendree member Mike Rushing has been one of those leaders. He finds that he relates better to these men than he does to scholarly types.

“These are the kind of people I’ve been around all my life,” he said. “They are like the working folks, who work down on the river.”

Rushing has been helping with Breaking Bonds a few hours a week. He’s hoping that as he does less professionally, he’ll do more with the church.

“This is a great thing. The need was laying here, waiting for someone to address it,” Rushing said.

During the ribbon-cutting for the facility on April 10, Rushing looked across the room at one of the residents holding a young infant. The baby was born after his father enrolled in Breaking Bonds. The baby will grow into a child who now stands a much better chance of having a father who is a provider for his family and doesn’t have his life controlled by addiction.

“Seeing that does my heart good,” Rushing said.

Participants’ families attended the ribbon-cutting, as did many members of New McKendree. Bishop Bob Farr was there, and he expressed sincere appreciation for the work being done.

“Rural Missouri is rampant with addiction, all over the state,” Bishop Farr said. “We need this in Joplin, Kansas City, St. Louis. This is just the beginning. Things that flourish take time.”