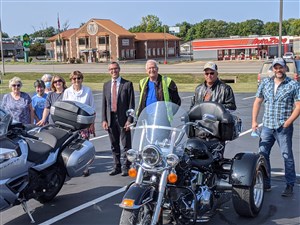 Riding a motorcycle across Missouri gets you plenty of fresh air and keeps you more than six feet away from other people. That meant that the motorcycle ride for Mozambique led by Bishop Robert Farr was one event that didn’t need to be cancelled, postponed or go online this year.

For the second year in a row, Bishop Farr mounted his Harley to lead a group of motorcyclists hundreds of miles around the state to raise awareness of the need for motorcycles among Mozambique clergy. At the stops Bishop Farr told those gathered that motorcycles are usually treated as recreation in the United States, but for pastors in Mozambique they are an essential means of transportation.

“Imagine if you pastor had to walk every where he goes,” Bishop Farr told the congregation at Hermann UMC, noting that pastors there often serve several churches. “And they’re not just going to church. They are checking on their people and sometimes bringing them essential supplies, like medicine.”

Rev. Lucas Endicott, associate director of Mission, Service and Justice for the Missouri Conference, explained that in rural Mozambique, where motorcycles are needed most, pastors often only make $1,000 USD a year, and a motorcycle costs about $2,500.
"It's something that proves cost prohibitive to many pastors," he said.

Motorcycles are an essential means of transportation in Mozambique.  As the United Methodist Church continues to grow Mozambique, 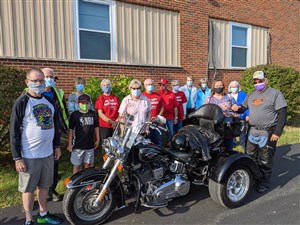 leaders are often in need of transportation to fulfill essential duties. As Ilda Guambe, former Mozambique Initiative staff member, shares “When my mom was a D.S. in Vilanculos and we had to go for a Charge Conference, we had to walk the whole day. We would leave home around 4 a.m. and get to the destination at 6 p.m. Often we had to sit in the bush and rest for some minutes. This reality is still there in many churches.”  The gift of a motorcycle is the gift of transportation.

This year the ride started at at Faithbridge in Osage Beach, near Lake of the Ozarks. The riders rode to Salem UMC, Memorial UMC in Farmington and Festus/Crystal City UMC on September 19. On September 20 they started at The River United Methodist Church in Eureka, then crossed the Missouri River and followed it west on the north side of the river, crossing back at Hermann UMC and attending Sunday morning worship there. After worship the riders followed the Missouri River back to St. Louis on the south side of the river, on Highway 100, stopping by Bethel UMC and ending at Manchester United Methodist Church.

Groups of people at the churches greeted the riders. More than $3,500 has already been raised this year. To support the cause go to https://mzinitiative.com/donations/motorcycles/.