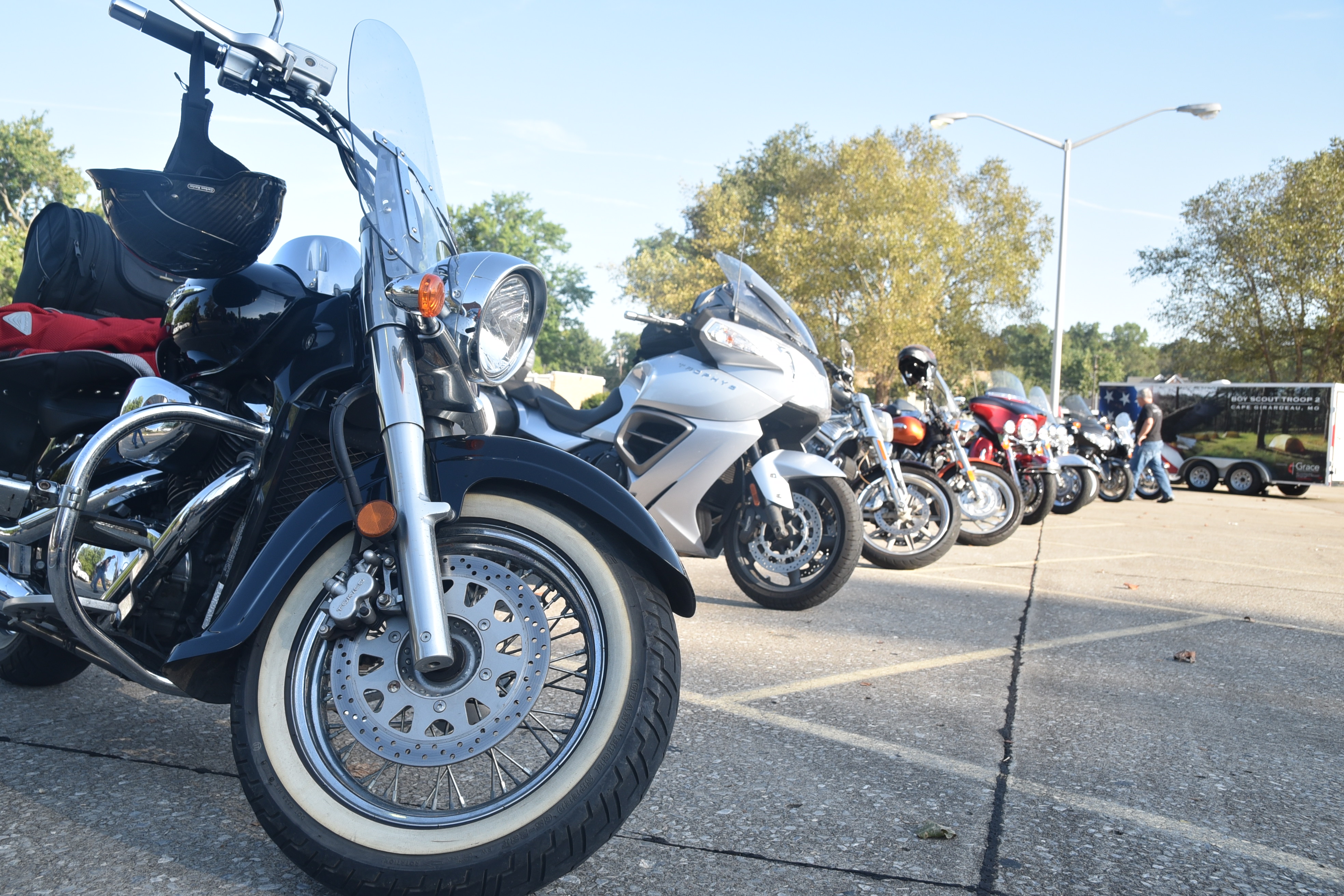 The total distance of the ride varied, as some riders had a big ride to make just to join the group. The Farrs began their ride a day early on September 28. After participating in a UMW event at Community UMC in Columbia they rode their Harley Davidson Softail trike to Morning Star in O’Fallon, where Bishop Farr preached that evening.
On Sunday morning, Bishop Farr preached at both services at Morning Star, and then after lunch they rode over to Unity UMC in Webster Groves for him to preach at the BMCR event (see story on page 20) After that they rode with two other motorcyclists to The Gathering about 15 minutes away. One of the riders was Kent Gastreich (husband of Rev. Linda Gastreich), who had only owned his Harley Davidson Street for two days.
When the four riders showed up at The Gathering they were joined by seven more. Southeast District Superintendent Bruce Baxter rode up from Cape Girardeau with his friend from Cape, Brad Haertling,
a member of La Croix UMC.
“I think I get the award for the oldest bike here,” Haertling commented on the 1995 BMW he was riding. He got the motorcycle from his uncle, who had ridden it all over North America, including Canada and Mexico.
Kevin and Shelley Sinkclear, members of the Paris United Methodist Church, also joined the riders there, and were the only riders who were not part of Conference staff to complete the whole loop around the state.
“My mom saw the announcement about the ride and showed it to me on the website and said, ‘You should do this,’” Shelly Sinkclear said.
A last-minute addition to the group was Lyndee Downs, who had just learned about the ride earlier that day through a chance meeting at a gas station. A highly proficient rider and knowledgeable of the area roads, she agreed to lead the group of riders to the first stop, the St. Genevive exit at State Highway 32.
After the first stop riders were racing the sun to try to get to Cape Girardeau before dark. They lost the race badly, and road the last several miles down I-55 in the dark before arriving at La Croix UMC somewhat tardy.
After Missouri Conference Senior Mission Strategist Lucas Endicott presented a program about the motorcycles for Mozambique to La Croix, the riders departed for their hotel. Although they were in the middle of town, three deer ran across the road right in front of the riders, and a fourth ran out but doubled back, reminding the group of the hazard of riding at night in Missouri, especially in the fall.

The next morning the group gathered at Grace UMC in Cape Girardeau, where they were treated to coffee and donuts before they got started. This morning the group had grown to 13 riders. Buddy Davis, a motorcycle police officer, riding safety instructor, and member of La Croix, gave the group a safety briefing and led the ride out of Cape Girardeau and down a series of rural roads toward Popular Bluff, passing by towns like Delta, Arab and Zalma. On Highway T near Lake Wappello, rider Rev. Jerry Willer, age 76, failed to negotiate a curve and ran off an embankment.
He was wearing a helmet. His face and shin were bleeding but insisted there was no need to call an ambulance. Willer proved to be a good deal tougher than the Honda Silverwing he was riding, which was a total loss. Willer was given a ride home by Endicott, who was coordinating the ride and following the group in his car. A couple of days later Willer was back to mowing his lawn, a three-hour job.
The ride continued on to Poplar Bluff UMC, where the riders took a break, then had lunch across town. After lunch several riders returned home, leaving only the four riders who rode the entire route. Now well behind schedule, they made a hard push for Mountain Grove UMC. The weather was typical for mid-July, but unexpected because it was September 30. The
temperature was in the mid-90s, and there was a strong crosswind. The high-speed run was challenging.
“Somewhere around 65 miles per hour it goes from being fun to being work,” Bishop Farr said of enduring a couple of hours of hot, highway speed wind without a break.
The riders were greeted with a warm reception and cold water at Mountain Grove UMC and their presence in town was covered by the local media, the Mountain Grove News Journal. Mountain Grove member Bob Andrews met the riders there on his custom Harley Davidson but did not join them as they journeyed onto Springfield.
They mounted back up for another ride of about an hour to Springfield, where they had about 30 minutes to check into a motel, and then head over to Kingsway UMC. There they were met by a large group of Mozambique supporters interested in hearing more about the motorcycle project.

The riders started the day by gathering at Wesley, where they were joined by two more riders, Rev. Rex Warren of Fairview near Bolivar and his friend David Payne. Their first stop of the morning was at Aurora , where they were met by a group of 40 United Methodist Women. Following Aurora they made a stop by the George Washington Carver National Monument. The next stop was for lunch in Carthage, where they met with Rev. Marsha Eichner and Rev. David Fowler, and took a cruise around the grand and historic town square, and by Carthage UMC.
Having appreciated the rural roads of the morning over the four-lane trek of the previous day, the riders asked Warren to guide them up back roads toward their next stop, Adrian. Adrian had a large group standing along the street to welcome the riders, as well as drinks, snacks and a $500 check for motorcycles in Mozambique.
Getting back into his familiar territory and entering the Kansas City metro area during rush hour, Bishop Farr led the riders from Adrian to their hotel in Blue Springs via back roads. Again they had a few minutes to check-in, then they set off for Saint Luke’s, about a half-hour ride away.
Saint Luke’s welcomed the group Mozambique-style, with people lined up singing as they dismounted their bikes and walked in the door. The church was the most recent Missouri Conference church to visit Mozambique.

Waking up to rain, after a quick review of weather radar the riders collectively decided that a northern bound route was ill-advised due to storms, so they were forced to cancel the stop at Cameron. Instead, they took Highway 24 eastbound. After crossing the Missouri River the ride was more like going through the everglades than mid-Missouri, with water lapping at the highway's edge. The Missouri River, which has been over flood stage since early spring, was cresting for a third time, and had turned what are usually high-production crop fields into a vast expanse of water. The riders continued north on U.S. Highway 65 to Chillicothe, and then west on US 63 to Brookfield, where they met with four area pastors at Trinity. (Highway 65 was closed the next day.)
Next, the riders took Highway 5 southbound through Marceline, Glasgow and then stopped in Fayette for a break at Central Methodist University. From there it was onto Missouri (Columbia), where they were met with sandwiches and cookies, and concluded with a final presentation.
During the final program each day Endicott addressed the obvious question: Why motorcycles for Mozambique pastors? To explain, he shared a story of a current Missourian and Mozambican. Ilda Guambe lives in Keytesville, recently moved to Missouri from Mozambique. Her mother was one of the first Methodist clergy women in Mozambique. She recalls beginning a walk at 4 a.m. to attend a 6 p.m. meeting, then repeating the walk back the next day. This was a common occurrence. In areas without public transportation and poor roads, many Mozambique pastors can end up spending most of their time walking. Motorcycles are the most common, practical, efficient and economic method to cover more distance in less time.
Motorcycles have been a need for Mozambique pastors for decades. Bishop Farr recalled that when he was a pastor at Church of the Shephard, they raised money to purchase motorcycles for several Mozambique pastors at that time. A motorcycle in Mozambique costs approximately $2,500. The ride has raised more than $10,000, with more continuing to come in. To support the cause make the check out to the “Missouri Annual Conference,” and write “Mozambique Motorcycles" on the memo line. Please mail the check to Lucas Endicott, The Missouri Annual Conference Office, 3601 Amron Ct., Columbia, MO 65202. To Text to Give: text the amount you'd like to give, plus the initials "MI" (For example, 50 MI) to 573-207-4546 and you will be directed through the rest of the giving process.


To view more photos from the motorcycle tour around the Missouri Conference go to https://www.moumethodist.org/photoalbum/12983627 .