Being A Pastor In A Community In Crisis 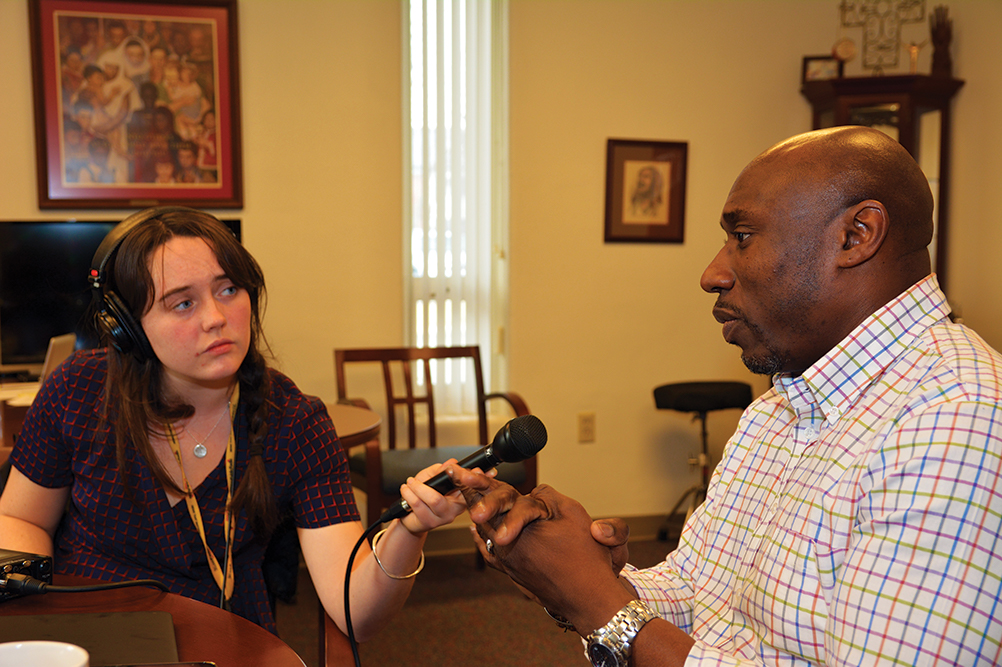 In the category of what news happened while you were sleeping, the news from Ferguson, Mo., got even worse,” said Steve Innskeep, as he led off the Morning Edition national newscast on National Public Radio on March 12.

The previous day, the police chief in Ferguson had resigned following public outcry from a report from the U.S. Attorney General. That night, around midnight, two police officers were shot while they stood outside of the Ferguson police station monitoring a demonstration.

That next morning, Rev. F. Willis Johnson of Wellspring UMC was meeting with his clergy coach, Rev. David Bennett of Kirkwood UMC. Bennett had called in Rev. Kimberly Jenne of Webster Hills UMC, who had previously helped Johnson with media relations. He also had over his local chief of police and a city council member to share any advice they might have. During the meeting, Johnson’s phone kept buzzing.

“I was just starting to get used to my phone not doing that,” he said.

Wellspring UMC is a new-church start. The church was about three years old when Ferguson became the focus of the national spotlight last summer. Wellspring has been in the middle of everything that followed, serving as a common ground for community discussion. Johnson has been in the streets, trying to balance an ethical approach and prophetic voice, and trying to keep people safe and keep things moving forward.

Johnson first learned of the police officers being shot on March 12 via social media at around 4 a.m. He had seen the buildup the previous day, but had hoped things would diffuse. When he heard the news he was disappointed, disturbed and anxious. When friends started calling, they asked, “Can you stop this?” “Can you temper this in some way?” Johnson also wonders how, and when, it will stop.

“How do we move towards an end that will bring about a resolution, that is needed at this time?” Johnson asked himself.

“When we were at our most vulnerable, this did not occur. Now that we’re at a point where we have some momentum, and actions are being taken to address some issues that are systematic in nature, this occurs.”

Johnson lives in Ferguson. The police station is about halfway between his house and the church. He has seen people come in protest of police department, and people demonstrate in support of the police department. One thing he’s found the two groups have in common is their lack of Ferguson residents.

“I don’t think Ferguson residents have made up 10 percent of any demonstration,” Johnson said. “This has been like hosting the Super Bowl or basketball tournament.

We have to deal with everyone coming here, but our team isn’t playing, and we don’t have tickets to the game.”

Johnson doesn’t decry protest, but would like to see local voices heard. “We need to be more coordinated and conscientious about how and where we are moving forward to,” he said. “It’s about transforming how we see one another. We have a lot of growing up to do, and a lot of growing together to do.”

The shooting of the officers was happening at a time when most pastors were focused on making sure everything is in order for Holy Week. And for Johnson, that side of being a pastor goes on as well.

Lent has been a season of prayer and reflection. Maundy Thursday at the church will be a special service involving foot washing. Good Friday will be a pilgrimage to Indianapolis, to a church where Johnson used to work, where they will join with other congregations for a worship service based around “The Seven Last Words.”

Resurrection Sunday will have special music, an Easter egg hunt, and candy for the children. This is also a time of Launching Of Leaders (lol) and the start of the confirmation class.

This summer Wellspring will be hosting the new Missouri Conference mobile camps program for a week. They will be partnering with other North St. Louis United Methodist Churches, including Asbury, North Park and Harmony.

“I’m really excited about partnering with these churches, and about the opportunity hosting mobile camps is bringing us,” Johnson said. “This is a real gift to the community, because we wouldn’t have had the manpower or resources to do this on our own.”

Johnson said he’s working on building a whole month of programming around the mobile camp experience, so it isn’t just a here-and-gone activity. He doesn’t know what will be coming next in the story everyone just refers to as “Ferguson,” but he does know that in addition to being the pastor whom the media calls, he needs to be the pastor in his own young congregation in the middle of it all.

“I don’t know what the future holds, but I do know who holds the future,” Johnson said. “It’s in that power and purpose that I put my trust and faith.”