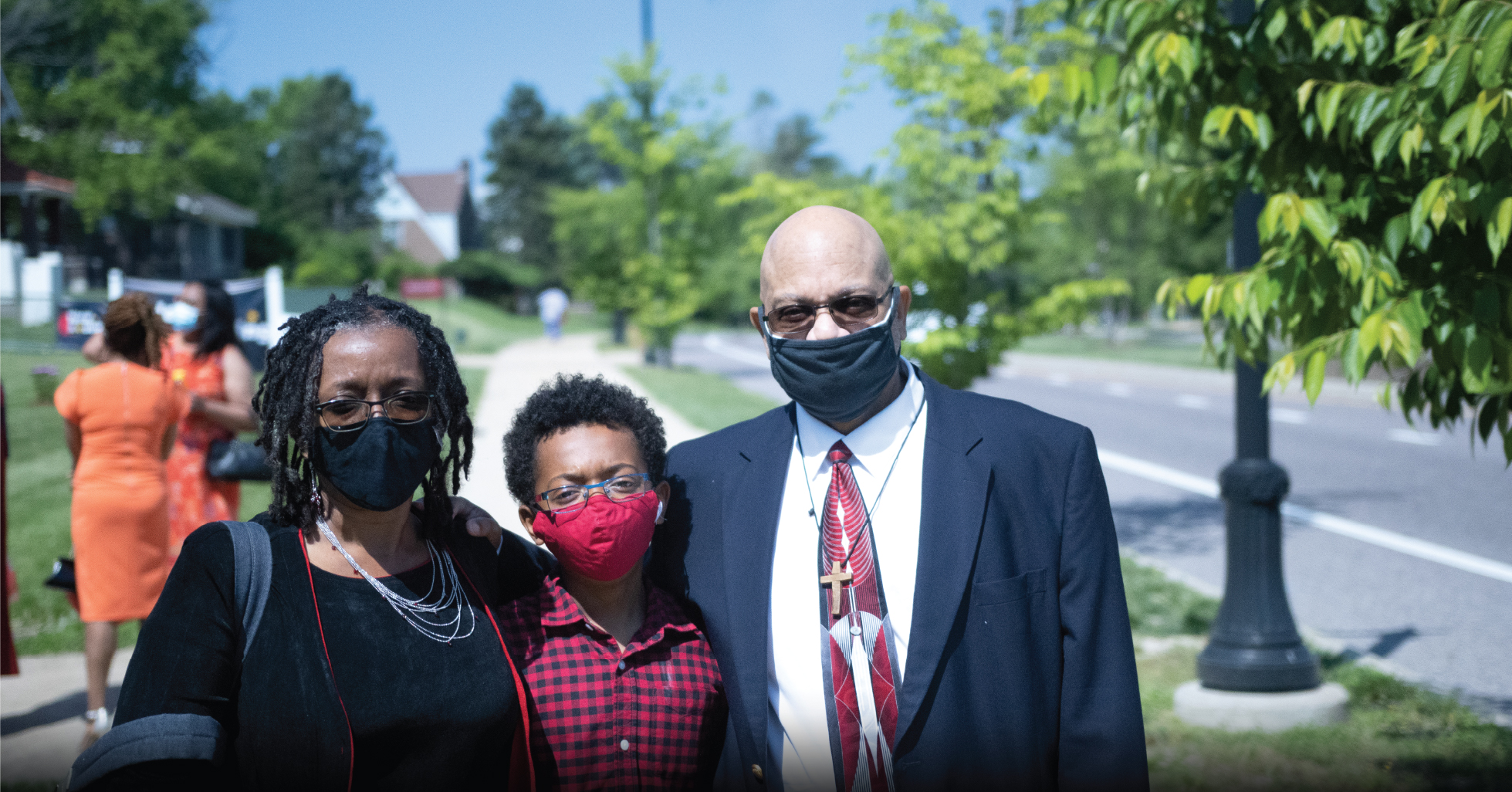 There are about 50 references to neighbors in the Bible, with all of them either offering strong encouragement for extending love or harsh admonishments for those who don’t. Being a good neighbor is at the heart of what New Awakening UMC is all about.

Rev. Cheree Trent Mills was appointed to Normandy UMC in June of 2020 and has been working on the neighboring concept with the church since then. The church is located on Natural Bridge Road in St. Louis, nearly in the middle of the University of Missouri – St. Louis campus. The church had a couple of partnerships in place with nonprofits in the community, and those have been expanded through the formation of new relationships.

“We worship together on Sunday, and worship is at the center of what we do, but we are also worshipping by being the hands and feet of Christ in our community,” Rev. Trent Mills said. “We’re out doing the work and spreading the love of Christ, not just having church on Sunday.”

Normandy’s last Sunday of worship was May 2, and it was Trent Mills’ first Sunday worshipping in the sanctuary after nearly a year of outdoor and online worship due to the pandemic. New Awakening officially launched on May 23, Pentecost Sunday, with about 80 people in attendance. That was about as many as Trent Mills wanted in the service, so they wouldn’t be crowded with a congregation that is COVID-cautious.

The online congregation at New Awakening typically runs about 200, and she hopes to keep 300 people engaged in online ministry as the church transitions back to in-person worship. The online presence of the church has hit in the thousands, particularly with the children’s church time. Trent Mills does a video recording of her children’s church talk from remote locations during the week, like the Dinosaur Park or the Butterfly House. 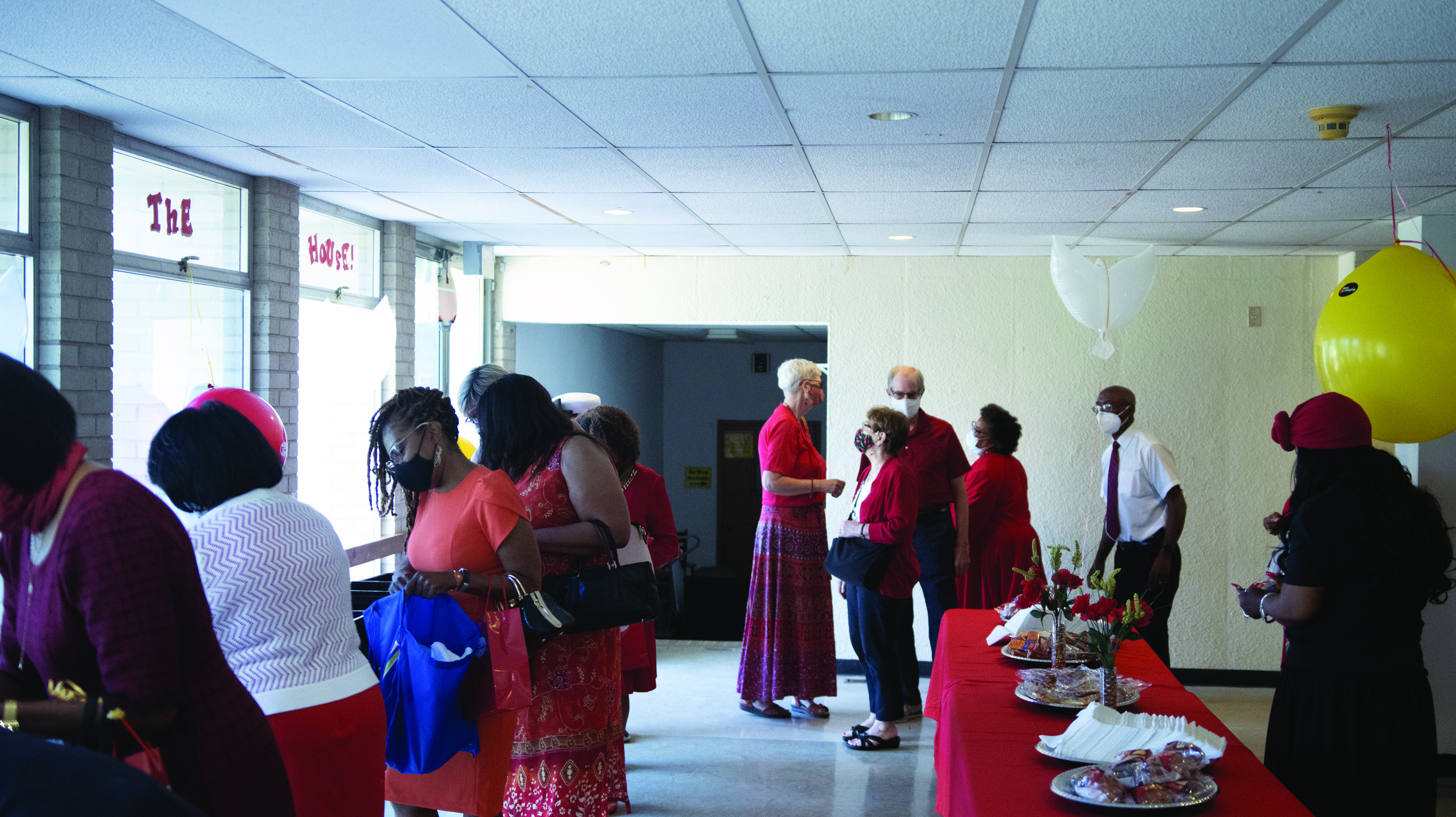 The online service is also supplemented by an in-depth Bible study of the scripture from service, lead by Dori Hudson.

Lamar Harris is the communications and multimedia consultant for New Awakening. He had been running online worship and is now working on in-person worship. Since New Awakening lives somewhere in the realm of a relaunch and a new church start, and it was online for a year, there’s a lot to do.

“There were not many new churches launching mid-COVID-19,” Harris said. “People don’t understand the amount of work that goes into launching a church.”

That includes things like moving from a singer and piano for online worship to a full worship band as well as coordinating special music. And then there’s the marketing that goes into the relaunch.

“Something new has awakened. The church is here for the neighborhood,” Harris said. “The challenge is getting people to know we are here.”

When the church does a postcard invitation campaign, rather than mailing the cards they walk around the neighborhood and hand them out so they can meet and talk to people.

“My goal is to find out what they need from us,” Trent Mills said. “When you have a neighbor, you do life with them. It isn’t just a one-time deal.”

While worship is vital, the church is leaning into community engagement throughout the week.

“We’re hoping to be a new church for a new time. It’s good to hear a sermon, but people need to know how to put the message of that sermon into action,” Trent Mills said. “We’re trying to build disciples but not by hitting them over the head with it.”

The church has revamped its adult education and literacy class on Monday and Wednesday morning. One notable student is a 98-year-old woman who is working on her GED. 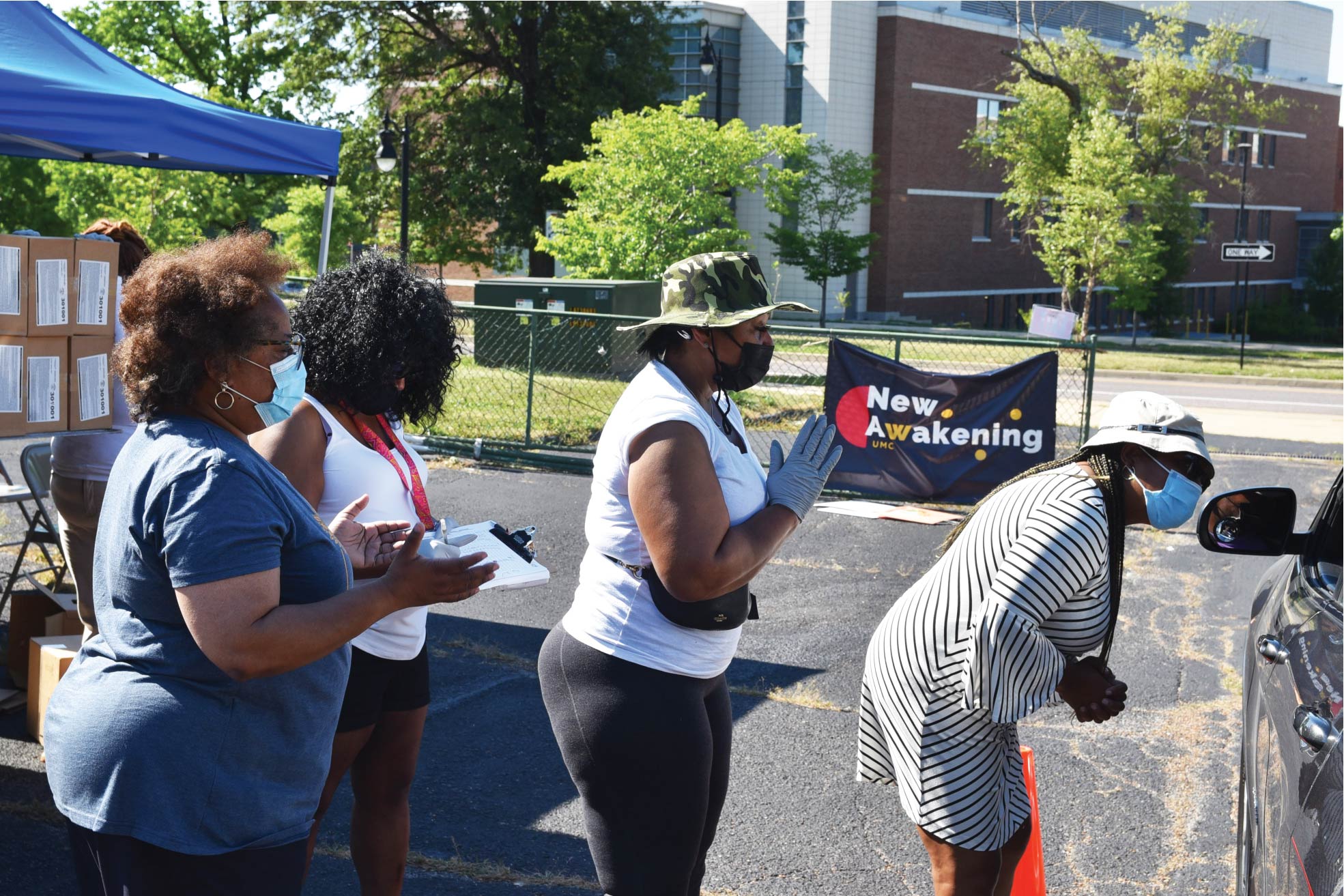 On Wednesday afternoons the church has a drive-through food giveaway that they started this March. They give out about 200 meals. When people pull up in their cars to receive the food, the church volunteers ask if they would like them to pray for them. Nearly everyone says yes, so Trent Mills and the volunteers pray with the recipients at the car window. Every bag of food that is distributed contains a flier from the church that invites people to programs and upcoming activities.

Also on Wednesday afternoons, Chester A. Deanes Jr., whose organization is called Fathers United To Raise Awareness, or FUTRA, has a weekly evening program for fathers at the church. “I’m encouraging family engagement and family unification,” he said.

Deanes works with men to help them make better choices. That might mean going back to school to get a diploma or getting more education to get a professional certification. Or it could mean making a break from alcohol or drug abuse. Gathering a group helps with accountability.

“Sometimes I don’t have to say anything, just sitting in a circle with other men and discussing these issues is what the men need,” Deanes said.

The church is an outpost for Computer Village of St. Louis, which teaches computer skills to all ages, from young children to senior citizens. Class size typically ranges from four to 10. They start with a beginners’ class, then move on to more advanced topics. Using Word and PowerPoint were some in-demand topics before, but in the past year they’ve also had classes on using zoom and hosting a Zoom meeting.

“I enjoy collaborating with other nonprofit entities. I want low-income people to understand the power of technology,” executive director Don Holt said. This summer they are having an eight-week computer camp at John Knox Presbyterian Church in conjunction with North County Churches Uniting for Racial Harmony and Justice. In the future, they hope to have a camp at New Awakening. In addition to assembling and disassembling hardware, the computer camp teaches the students about operating systems, programming languages and using computers for things they hadn’t considered, like Internet Protocol Television.

“In the early 80s, I was one of the first kids to go to computer camp. I was that one Black kid,” instructor Kelly Wimbley said. He then started a computer science club at Roosevelt High School. Now he’s with Computer Village. “Our whole purpose is to bridge the digital divide,” he said.

The confidence built from understanding how a computer works, rather than just using it to look at the Internet and type papers, carries over into other areas. Youth that are scared to take apart a computer are encouraged.

“I tell them, ‘Do your dreams. Don’t be scared. If you’re scared, just analyze that fear and think about where it’s coming from’,” Wimbley said.

Trent Mills has been actively seeking out existing partners that are doing good works like Computer Village, but some of what’s going on at New Awakening has deep roots with Normandy UMC. Sharvitti Broussard lives in the area and has been a member of Normandy since she was a child. She just graduated with a master’s degree in medical science and is applying for medical school. She does an online outreach initiative each week called Career Chat to get youth thinking about their future. So far she has featured a young Black woman who is an aerospace engineer, a neuroscientist, a musician, a video game designer, doctors and Alisha Sonnier, a mental health advocate and the newest member of the St. Louis Board of Education. The discussion groups are for ages 14 to 24 years old.

“It can be people just getting started in thinking about their career or maybe still trying to figure it out,” Broussard said.

There is a life-skills class for retirees on Fridays and a Bible study at the church on Friday nights for international students that was going on before Trent Mills arrived.

“We’re so blessed to have this building. It just wants to be filled with activity,” Trent Mills said.
She isn’t stopping there. The family life center in the church basement has a stage, and Trent Mills has started making contacts to get a drama program started at the church. She believes it could have a therapeutic effect for children struggling with post-traumatic stress disorder.

“Therapy is challenging for them because they ‘act out,’ she said. “Why not have them really act out here?”

She’s also working with the university to try to offer violin and guitar lessons at the church. And plans are underway to turn a room into a recording studio.

“How do we affirm people where they are, and build trust?” Trent Mills said. “We want the people of this community to see the church as a resource.”

As things continue to develop, Trent Mills continues to look for new ways to be a good neighbor.

“It’s all from God,” Trent Mills said. “Without God, we couldn’t be doing any of this.”
News