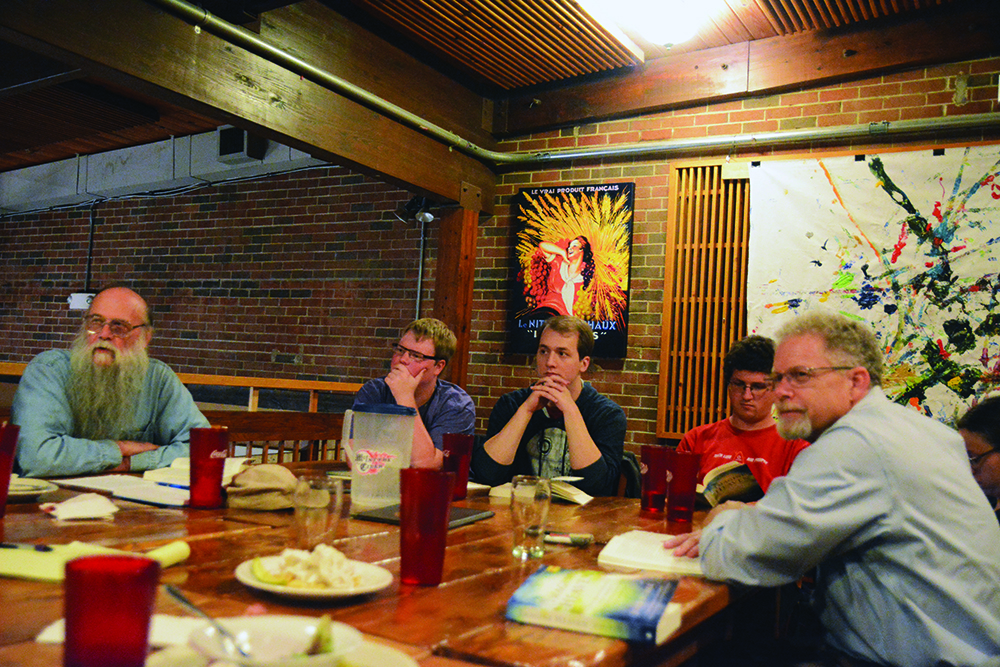 First UMC in Rolla is trying several different approaches to reach out to new people, including small groups that are outside the norm of what many people expect at church. The Beer and Bible small group meets at 6 p.m. at the Public House in Rolla, a microbrewery located in a former lumberyard. The age range of the group is strikingly diverse, ranging from college students to retirees, with every age in between. Although they call it Beer and Bible, it’s not a raucous beer fest. Some people were ordering dinner, others just got a drink. Several people were drinking water or soda. The beer drinkers stopped with one.

They begin the meeting with a prayer, and then started sharing God moments, or places where they had seen God working in their lives. From there they moved into the book discussion. During October they were studying Imagine Heaven by John Burke. The book is about near death experiences. They are open to studying books like this, that address religious themes but aren’t necessarily Methodist. They do so with caution, though.

“Books like this often pick individual lines of scripture to try to support their case, but you have to consider the context of the writing of the scripture,” campus minister Mark Potrafka said.

First UMC Rolla has a very active Wesley group at the University of Missouri School of Science and Technology, with about 20 students in regular attendance, and 40–50 at the weekly lunch. Some of the students from the Wesley group are active participants in Beer and Bible, and were engaged in the discussion that questioned some aspects of Burke’s take on the afterlife.

“As far as the details of the after life go, does it even matter? As long as I’m with God I’m good,” said one college student.

Rev. Bill LaMora noted some places where Burke’s commentary strayed from accepted United Methodist interpretation of scripture. He also encouraged people to read well accredited material, consider their own experiences and be open to lifelong learning.

“It’s important that we don’t just take information that was funneled to us in kindergarten and make that the only story we know for the rest of our life,” LaMora said.