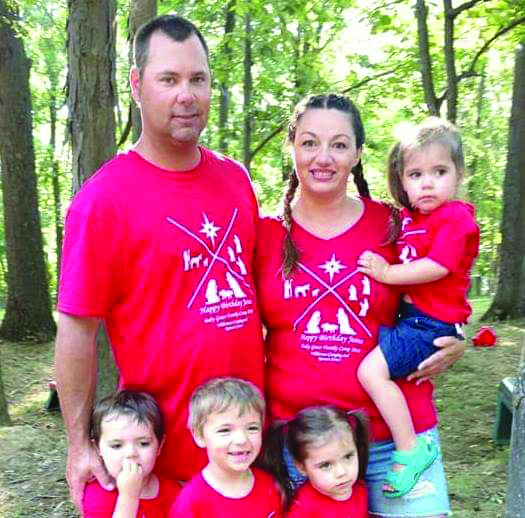 Danielle Flanagan and her husband Nick had two boys through and in vitro fertilization process and thought they would have a family of four.
“We were happy with twins, because we certainly couldn’t afford to do in vitro fertilization again,” she said.
They soon found that wouldn’t be necessary. Flanagan was pregnant again. When getting her ultrasound, her technician asked her if this was her first scan. She seemed nervous.
“No, I’ve done this before. I have five-month-old boys at home,” Flanagan told her. “I’ll be fine, so long as you tell me there’s just one in there.”
There was a pause. A pregnant pause.
“There are two,” the technician finally said. “See,” she added, showing them her the monitor.

A few months later the Flanagans were going through up to 40 diapers a day.
Nick is a concrete pumper. It’s good work, but it took him from their friend and family support network in Tennessee, to a new home in the Kansas City area. There’s plenty of work there. Sometimes Nick works up towards 80 hours a week. He was essentially working two jobs, and Danielle was at home with the babies, because childcare for four babies would cost more than she could make at a job.
When they moved to Raymore, someone in the community put Flanagan in touch with Baby Grace. She appreciated the diapers and clothes the program offered, but more than that she appreciated the connection. Soon she was volunteering to help as she could.
“It was a blessing to be able to meet people,” she said. “Being a stay-at-home mom can be very isolating and lonely.”
Soon after being introduced to the Baby Grace ministry Danielle went to Mom Camp with Baby Grace. This first Baby Grace camp was in 2012, but it was modeled after a camp for teen mothers that started at the Missouri Conference Camp Galilee in 2008. Baby Grace decided they would adapt to a weekend model to accommodate adults who wouldn’t be able to take off work to go to camp.
Baby Grace Director Juli Yocum was impressed when she attended a camp for the first time in 2016.
“Often in mission service you don’t get to see the fruits of your labor, but at camp I was able to witness so much joy in 48 hours,” she said.
She recalls seeing Danielle Flanagan sitting at the pool in tears. She asked her if she was OK, and Flanagan assured her she was.
“It was the first time my kids had been to a pool,” she said. “I couldn’t safely take them on my own, and people are so busy, it’s hard to ask someone to go with you for that kind of thing.”
At Baby Grace camp there was one volunteer in the pool for each one of her children, and she was able to sit there with her feet in the water and watch them enjoy the experience.
The next year Nick joined them on a family camp.
“It was wonderful. It was the first time we had all been able to take a vacation together,” Flanagan said.
From 2016 to 2019 Baby Grace Camp grew from one to five camps. There are 12 moms with 26 kids – a total of 75-80 people at the camp. In 2017 a family camp was introduced for mothers who had older children. In 2018 an alumni camp was started. In 2019 a Dad Camp was started. “It’s an opportunity for Baby Grace moms to develop into camp leaders,” Yocum said.
Flanagan said she was amazed at how life-changing and transformative that simple 48-hour experience was.
The next year Nick attended Dad camp with the boys.
“We usually try to divide and conquer,” Flanagan said. “It’s important for each of the kids to get some one-on-one time with us, too.”
She found Baby Grace to be an awesome community of support and one in which she could be helpful to others.
“A lot of teen moms are in less fortunate situations than I am, and they look up to me,” Flanagan said.
“The first year I attended Mom Camp I didn’t realize how much I had been drowning,” she said. She had suffered an immense amount of personal tragedy in her own family. Her brother had died when she was pregnant with her boys, and her sister died when she was pregnant with her girls.
“I had a special bond with people there,” she said. “It was a way to have family when my family wasn’t around. Sometimes we don’t realize all the things we could be to someone until someone has helped us in that way.”