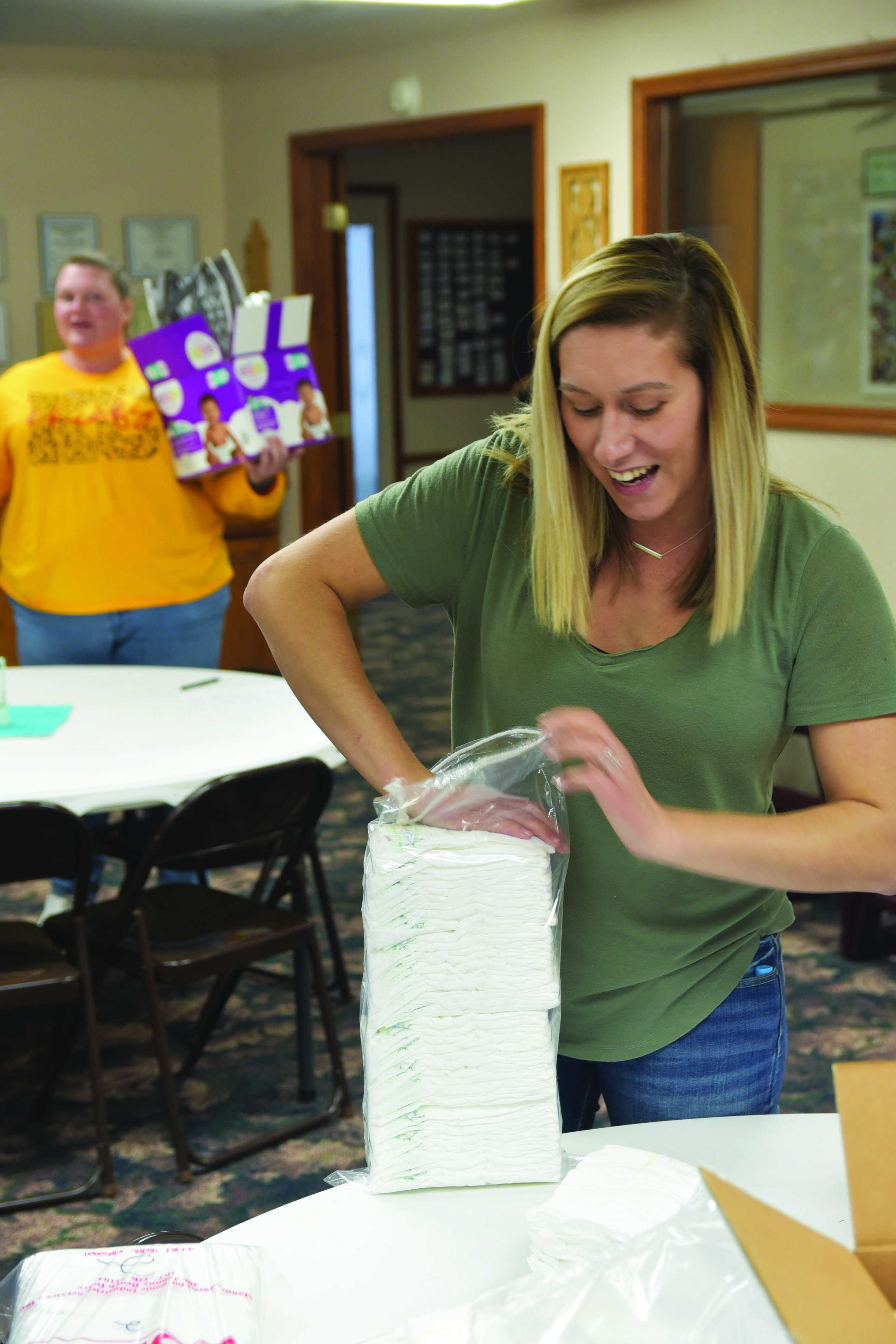 When Leslie Brice was 17, she was on track for graduating high school early. She was putting money aside to buy a class ring and graduation cap and gown. Then she got pregnant. “The money I had been saving went for a crib,” she said.

Her school at Buckner referred her to the Baby Grace ministry at the local United Methodist church. She found the free diapers and clothes to be very helpful, but even more helpful was the relationships.

“As a pregnant teen, you don’t want to walk into a church because you’re afraid of the judgmental looks you’ll get,” she said. “But the people I met through Baby Grace I’m still friends with today.”

Soon after she gave birth to her daughter Hallie, someone from Baby Grace hand-delivered a basket of newborn essentials to her.

That was 11 years ago. Brice now also has a seven-year-old son named Breslin and a six-month-old daughter named Irelyn. She has completed classes for her degree in nursing and is employed as a patient access representative in the Emergency ward of St. Luke’s East Hospital in Lee’s Summit.

“I really appreciate everything was that was given to me before, and it’s humbling now to be in a place of financial stability so that I can pick out and purchase things for my baby on my own,” Brice said.
That doesn’t mean Baby Grace is a thing of the past, it just means Brice is in a different place. She’s now the newest board member of the Baby Grace foundation.

Baby Grace was conceived in October of 2006. Juli Yocum and Anne Farmer of Buckner UMC attended a Heritage Keeper conference in Wichita, Kansas. They came home inspired to make a difference. Farmer had seen from her work at school that teen pregnancy was high in her community.

That year she knew six girls in high school who were pregnant, and four of them dropped out of school. One of Yocum’s best friends had been a teen mother. They soon learned there were 27 teen mothers in their school district, not counting those who had dropped out.

“Our goal from the beginning was to make them understand that they are not alone,” Yocum said. “We’re walking and praying with them. Regardless of the circumstances that brought them there, they are having God’s child.”

The ministry started out by delivering teen mothers care packages of basic supplies. They started making plans in November of 2006 and did their first delivery in January 2007. They worked with Parents as Teachers to identify mothers who could benefit from receiving the packages.


When summer came around they wanted to continue maintaining the relationships they had started, so they decided to do monthly events at the church. They had a book drive for one event, a clothing drive for the second and a toy drive for the third.

“We had eight moms show up for the first event,” Yocum said. “For some of them it was the first time they had been in a church. There was power in them coming to church and knowing that we accept them for who they are.”

The donations didn’t stop when the summer ended. They let the teen mothers know that they had more resources to be shared, and the mothers started inviting friends and family members with young children.

“We dropped the notion that we were there to serve teen moms and decided to help anyone with children age 0 – five,” Yocum said. “At 18 months into the program we had more people coming to our Baby Grace programs than we had coming to church on Sunday.”

In 2008 they held a meeting to share what they were doing with other area churches, thinking they may want to donate to the cause. Instead, three of the six churches that attended the meeting decided they wanted to start their own Baby Grace ministry.
Franchising the ministry was not part of the original plan, but the other churches sought advice and were soon following the same model of ministry.

This continued into an expansion strategy based on the original three churches. There are now 20 churches in Missouri involved in Baby Grace: 19 United Methodist churches and one Christian Church. They share a common mission, but tailor their ministries to match the needs of the community. For example, if the community already has a robust clothing ministry, Baby Grace may opt not to overlap with that aspect of the ministry so it can better focus on other needs. Some churches operate as a distribution center, some have regular fellowship dinners.

When the ministry in Buckner hit the 10-year mark and there were more than 10 Baby Grace locations, it was decided to make Baby Grace a ministry that focused on all the locations, with Yocum as the executive director and Farmer as the site director for Buckner. Yocum spent a year talking to other non-profits and was advised to develop Baby Grace into a non-profit organization with 501c3 status, making it its own independent entity.

It had been challenging to collectively tell the story of Baby Grace because different locations provided different levels of service. Forming a non-profit allowed the organization to collectively bring all locations up to a standard regarding the people whom they are serving. In 2019 all chapters agreed forming a new, collective entity was the way to go and officially received their 501c3 status on October 31.

This month marks the one-year anniversary for Baby Grace in Gravois Mills. On the second Monday of each month, the church hosts a Baby Grace night in which they distribute diapers and baby wipes. They also have a starting kit with additional items for new mothers. Some things are brought from the food pantry as well. Once a quarter they do a clothing distribution. The first time they offered the ministry they served 12 families.

A crib in the narthex collects donations. The church held a combination garage sale/breakfast that raised seed money for the ministry. Dana Sutton coaches the cheerleaders at the school where she works in Versailles, the squad did a “Wipe Out” fundraiser that collected 500 baby wipes. The Sonic in Versailles provides plastic bags that are the perfect size for packing up the monthly ration of diapers and wipes.

“Everyone has just been generous,” said Sutton, one of the organizers of the ministry. “We have a generous community.” Even in the first year, mothers who
have benefitted from the
program have already begun giving back, donating clothes and other baby items their children have outgrown. The church is working toward setting up a designated space for the Baby Grace ministry in a room in the basement.

The Baby Grace helpers are a close-knit group. Tiffany Shuck is Sutton’s daughter-in-law, who also works at the local school in Versailles. Shuck and Sutton both worked together to establish the ministry. Cheyenne Richardson is a friend of Shuck’s and goes to church at nearby Stover UMC. For efficiency purposes, Baby Grace tries to have people from nearby churches working together, rather than having to separate ministries a few miles apart.

The women create an atmosphere at the church that makes people feel not only welcome, but encouraged and expected. On a Monday night in February, a nervous-looking mother walks into the church for the first time. “Are you new?” Shuck asked excitedly. After getting a nod, Shuck responds with, “Yay!” claps and then helps her get signed in.

“About 90 percent of who we see here are people we know,” Sutton said.

Yocum marvels at how their ministry at Buckner UMC grew to 20 locations, all based around the bonding theme that caregivers of babies and young children feel unconditional love from the church and come to understand receiving grace. She uses her 40-minute drive to work in downtown Kansas City to make phone calls in support of the ministry.

When Yocum considers outcomes, she has an evolving view of “success,” and settling on success being about breaking cycles. For some, that may just mean making connections with other mothers and getting a little help at a trying time.

For these caregivers things are much harder, they come to Baby Grace having grown up in survival mode, not knowing where they would spend the night, where the next meal was coming from, or if they would be faced with violence from a parent. Even if they are still struggling to pay the bills, they’ve achieved success by raising their children in a home in which they are not in basic survival mode on a daily basis.

“They are overcoming obstacles and are setting up their children to be able to reach the next level of success,” Yocum said. “This will make their communities stronger.”

For more about Baby Grace, visit their website at www.babygrace.org.
News