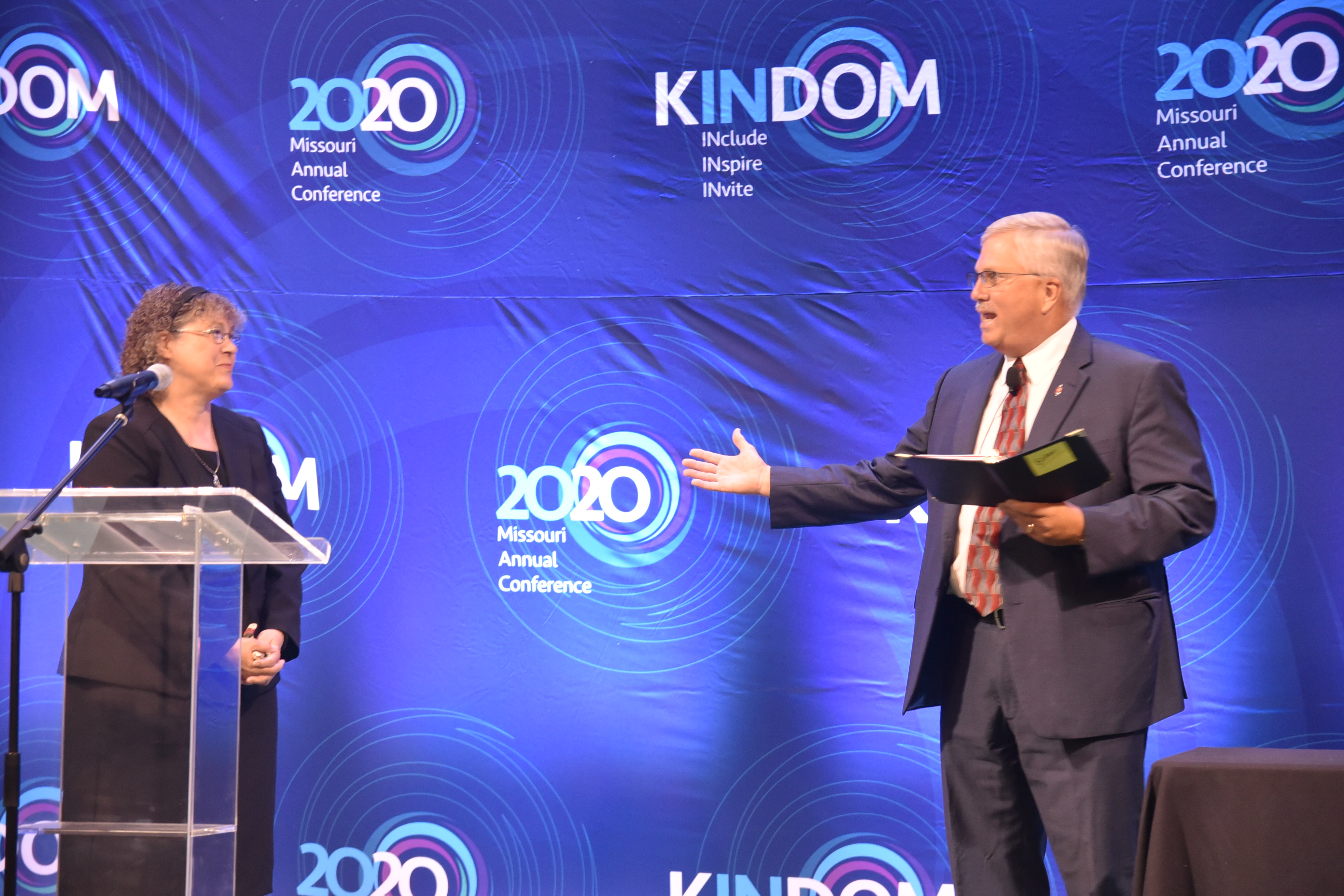 But much of it was the same. The session began in its traditional manner with the singing of “And Are We Yet Alive?” but rather than congregational singing it was sung by Nikki Lerner, a professional singer and worship artist who was originally scheduled to be worship leader this year.

Missouri Bishop Bob Farr said in his 40 years of conferencing he never gave much thought to the traditional opening song, but this year it hit him. While Charles Wesley knew there would be hard times, he couldn't have forseen the events of 2020.

What troubles have we seen,
what mighty conflicts past,
fightings without, and fears within,
since we assembled last!

This was the 204th session of Methodist conferencing in Missouri. It was the first time it has been held virtually. More than 800 people were participated in the Conference online via a webinar format, and another 60 watched via livestream on Facebook.

Although this was the official session, Annual Conference Session-related activities have taken place over the course of the summer. A pre-conference session that featured many reports was conducted on May 28. The required closed clergy session was conducted online on June 8. Live webinars were posted online in August. Questions and answer sessions were conducted online in the weeks leading up to the conference and included the Conference treasurer and statistician, the nominations team and the rules and procedures team.

During his opening message, Bishop Farr referred to the scripture Acts 2: 1-4 and 14-21, describing Pentecost and the movement of the Holy Spirit. He said the Conference theme, Kindom – Include, Inspire and Invite, remind us of John Wesley’s declaration, “The world is my parish.”

“We’ve certainly experienced that this year as conditions have caused us to leave our buildings whether we wanted to or not,” Bishop Farr said.

“This is a time when the church needs to speak out with bold urgency. May we invite the Holy Spirit into our meeting so it becomes holy conferencing,” Bishop Farr said.

The bar was established by Conference Secretary Monica Jefferson. Annual Conference Sessions Chair Marsha Eichler was introduced and she explained the theme.

“We choose Kindom as the theme well in advance of the pandemic,” she said. “God created us for relationship. We’re all related, we’re all kin. Our differences encourage us to live in isolation. There’s a ripple effect to the relational ministries that occur. Everyone is welcomed in this community. Each person has value, and each person has a vital role.”

Rules and Procedures Chair Hannah Shanks presented for her team. The rule related to the Core Practices Team was proposed to be changed, so this team could be dissolved with its duties disbursed to other areas. This change passed.

The nominations were released online more than a month ago, but Nominations Chair Rev. Jeremy Vickers presented the final, corrected list for approval. It passed. This was Vickers’s final year chairing the nominations committee.

This year, 19 local churches closed in the Missouri Conference. A clean audit was presented for the year 2019. This year many churches are continuing to pay 100% of apportionments, even though they are only being asked to pay 75% due to the pandemic. At the end of 2019 the Missouri Conference had $1.5 million in reserve. The proposed budget for 2021 is $12.4
million, down $1.2 million from 2020, adding to a 22% budget decrease since 2006.

Last year the Missouri Conference awarded grants totaling $2.98 million back to local churches, out of about $9 million that was given to the Conference in apportionments. The Conference is on track to eliminate the debt on the property in Columbia by the end of the year. The proposed budget was passed.

Brian Hammons, chair of the Missouri Conference Episcopacy Committee, presented his report. Normally he would have been talking about how the committee was going to request that Bishop Farr be reassigned to Missouri at Jurisdictional Conference this year, but that request, and all business of Jurisdictional Conference, including the election of new bishops, has been postponed until 2021.

“The Book of Discipline provides a lot of detail about a lot of things but is pretty silent about what to do when conference is called off,” Hammons said. Even the bishops who had planned to retire this year were asked, and agreed, to work another due to the Jurisdictional Conference being postponed. Hammons assured the Conference that he and Rev. Cody Collier would continue to serve on the Jurisdictional Episcopacy Committee and work to keep Bishop Farr in Missouri.

Hammons congratulated Bishop Farr for an outstanding job of helping the Conference navigate hosting a special session of General Conference in 2019 and the ramifications of the decisions made at that Conference.

“We don’t know what lies ahead. It’s a tough time to be a leader in the church. But Bishop Farr is faithfully leading us with hope of moving forward,” Hammons said.