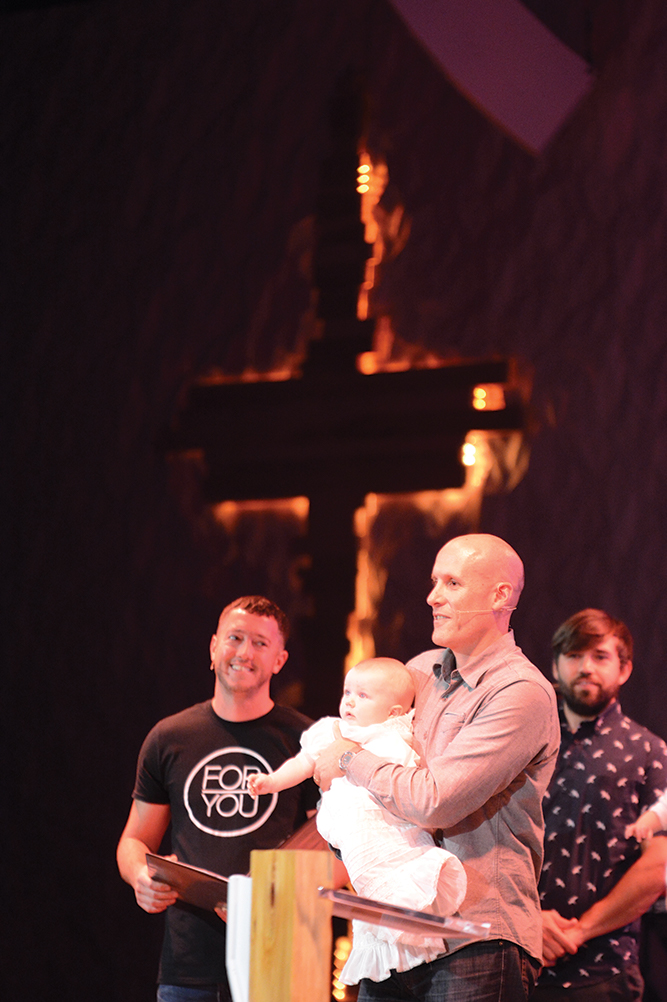 The Gathering is certainly a New Place for New People. That’s the entire point. With The Gathering, that has always been the point. Their mission statement states that they exist to create a Christian community that is compelling for new generations of people in St. Louis. 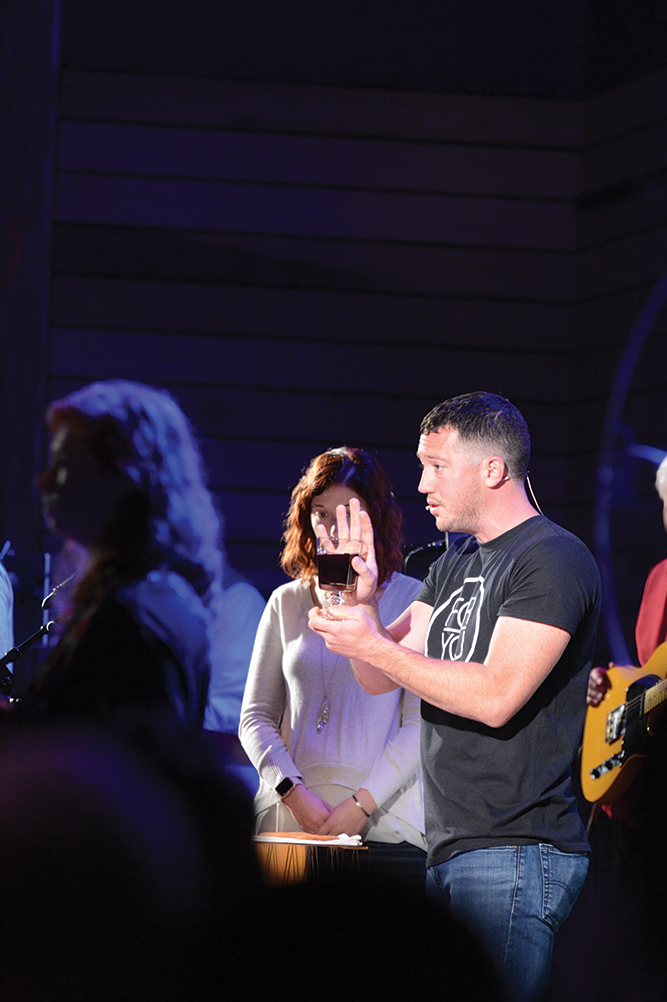 It’s not exactly a new church, though. It is in a new building as of August 26. It hardly qualifies as a relocation; as it only moved a couple of blocks down the same street. But it went from the old church building that the church restored in its humble beginnings to a new facility designed specifically to suit their current and future needs. More importantly, it went from a very quiet, residential part of McCausland to the busy intersection of McCausland and Manchester that has about 30,000 vehicles passing by a day.

The Gathering hopes that some of that traffic will be stopping in. The new building is 26,000 square feet, doubling its sanctuary capacity from about 300 to 600 plus overflow seating, adding lots of classroom space for children and going from 37 parking spots to about 200.

The Gathering launched in 2006, with 288 people at its launch service filling the sanctuary. It was an unusual church start from the beginning. First, founding pastor Matt Miofsky went to Bishop Robert Schnase and requested permission to start a church – the idea for it did not come out of the Congregational Development arm of the Conference. It was started in the city – a rarity in of itself, and in the historic structure of another United Methodist Church that had recently closed, a relatively untested model for church planting at the time. Most of the launch team knew each other from Webster Hills UMC, but it was a stand-alone new church plant, funded by the Missouri Conference.

Many new churches build a small, active congregation but are unable to reach the level of self-sustainability. The Gathering didn’t have that problem. The church went multi-site when it opened a campus at Clayton. Then it moved into the school at Webster Groves. Now it is looking at building something across the river in Illinios.

The Gathering currently averages about 1,250 people in worship at all sites. Last year United Methodist blogger and number-cruncher Len Wilson ranked The Gathering as the third fastest growing United Methodist Church in the country (out of churches with more than 1,000 in attendance.) It has been making the news lately, with complimentary stories in The St. Louis American, Town & Style and the St. Louis Post-Dispatch within the past month. The grand opening on August 26 saw about 1,700 (including 300 children) in attendance at the McCausland site.

“I felt God challenged me to create new opportunities,” he said.

Miofsky has said from the beginning that he wants to reach people who had become disconnected from church. That’s now a pretty typical profile of someone who attends The Gathering, although their religious backgrounds come from all over the place. Peter Edison had a ritual of meeting up with friends for brunch on Sundays. His friends asked him to just come to church with them, so they wouldn’t have to make arrangements for when and where to meet for brunch; So he gave it a shot.

“I came so it would be easier for us to meet, but I stayed because of the message,” Edison said.

He hadn’t been attending worship for about 10 years, and back then it was at a Jewish synagogue. But the people at The Gathering made what might seem like a big jump to a lot of people feel like a smooth transition.

“I was really struck by the feeling of love and acceptance here,” Edison said. “They made me feel very welcome.”

Kayleigh Johnson’s friend encouraged her about coming to church for six months. Finally, about a year ago, she gave in and is glad she did.

“I was really touched by site pastor Matt Fulmer’s message that day,” she said. Johnson had been a Christmas and Easter attending Catholic but found The Gathering to be a place she could relate to. 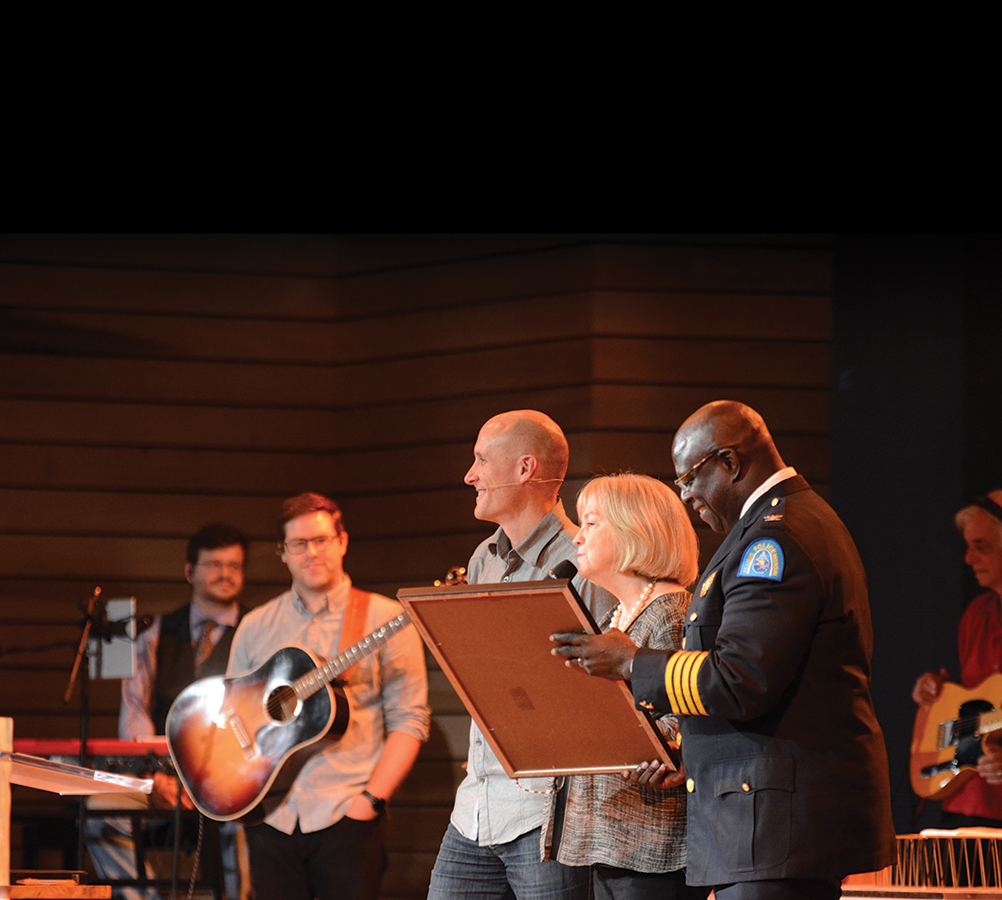 “I was in Catholic school for 12 years, but here I immediately felt more connected to God, rather than kept at a distance. I also felt I was being spoken to, not spoken at,” she said.

Regarding the new facility, she said she thinks it is beautiful, and although she misses for former historic sanctuary, she sees that this building will help the church continue to make connections like it did with her. “This was built for all of the people who will come in the future,” Johnson said.

Not everyone who goes there was unchurched when they started, though. When Christian and Adrienne Roestel moved to the neighborhood they visited a lot of churches. The Gathering was the one that stuck because they liked the sermons. They are now there with their three young children and appreciate what the new facility means for the future.

“It fits the mission of being a place where we can bring the community together,” Christian Roestel said.

There were a few people at The Gathering’s grand opening who were there in their official capacity to the community. Lyda Krewson, the mayor of St. Louis, was at the service with Col. John Hayden Jr., the police commissioner for St. Louis. Together they presented a plaque to Miofsky proclaiming August 26 as The Gathering Grand Opening Day. Lauren Price, principal of Peabody Elementary where The Gathering has an active literacy program, was also in attendance.

The grand opening of the site on August 26 kicked off a sermon series called “Hope is Built.” Fulmer and Miofsky started out talking about how when you remodel you have to demolish before you begin construction. A couple of children from the congregation came on stage and punched through a (cardboard brick) wall to illustrate the point.

Miofsky explained that although The Gathering is in a newly constructed building, there was still demolition that needed to take place. The construction site, being in an urban area, had generations of discarded items in the soil that need to be dug out. It took longer than Miofsky expected, so he asked the construction foreman why it wasn’t progressing faster.

“He told me that you don’t want to pour a new foundation over old junk,” Miofsky said. “I just wanted to see something built. I didn’t care about the old stuff being carried away.”

Miofsky advised those who were present who had not read the Bible that the Sermon on the Mount, Matthew 5, was a good place to start. For his scripture that Sunday, he went to the story at the end of the sermon (Matthew 7:24-27) that tells how the wise man builds his house on solid rock, not sand.

In his sermon Miofsky said some people want God to build something new in their lives, but they don’t want to address the old junk they have buried away – the deeper issues. It doesn’t make for a firm foundation.

king of his own experience, Miofsky said three years into starting The Gathering it was apparent that the space they were in wouldn’t accommodate the church’s growth. He tried many relocation options that didn’t work out. He now looks back and feels like it was God’s way of telling him he wasn’t yet the leader he needed to be to handle the next phase of growth. He needed more humility and more patience, and he needed to give up control of trying to do everything himself.

“A lot of you may be wondering why it is taking so long to get to where you want to be in life. It may be that God wants to give you something new, but you can’t pour a new foundation over old junk,” he said. “What junk is sitting in your life that you don’t want to build over? For some it may be sin. For some it is fear of inadequacy. For some of you, you may have ambition toward the wrong things.”

He encouraged those present to take some time to consider the junk they have buried that may be holding them back and take it to God.

“This is where a life well built has to start. Today marks a day for new beginnings,” he said. “God removes something from our life, so God can build something better.”