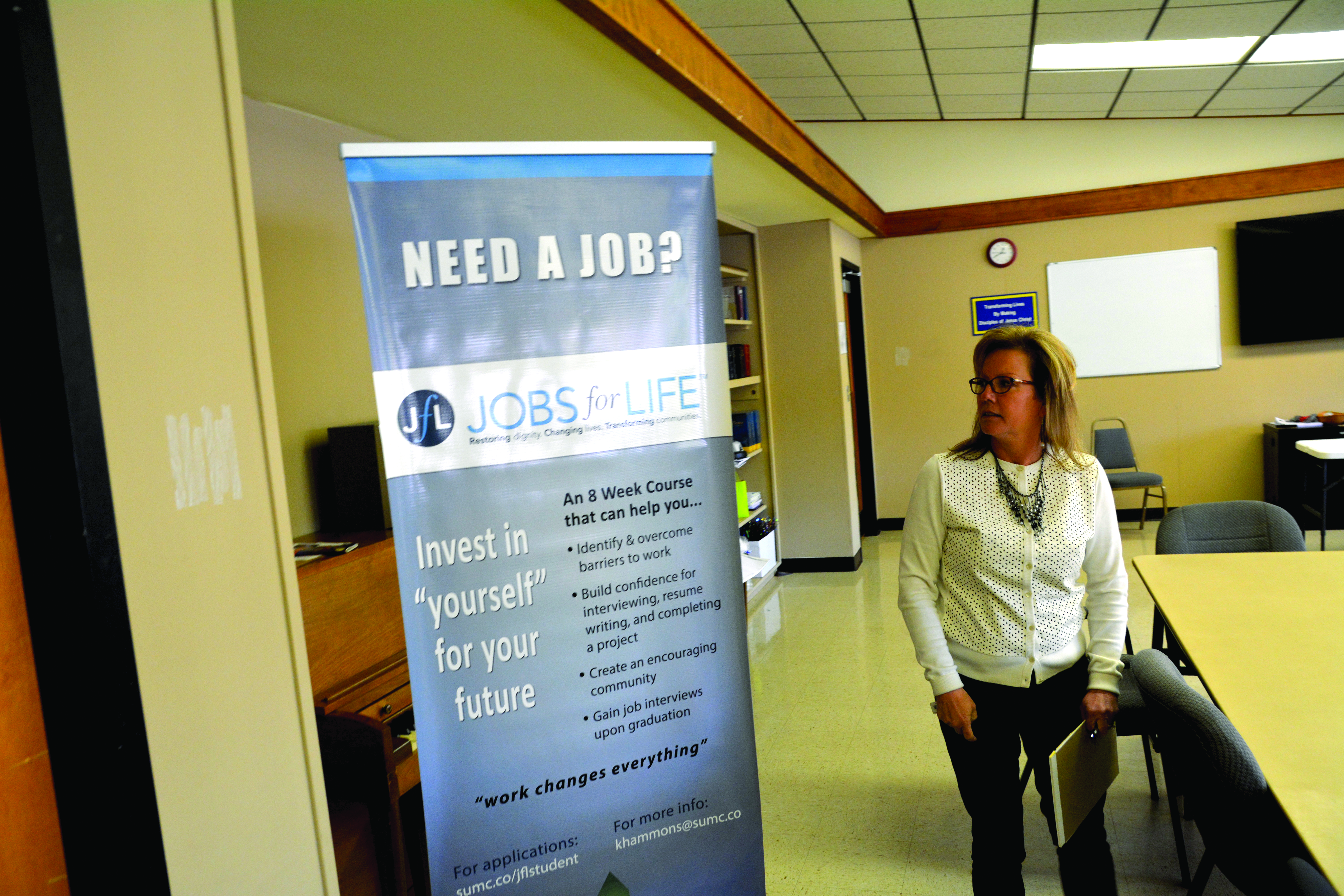 Helping someone through the day is one level of ministry. Helping someone make a change is another. Jobs For Life isn’t about helping the masses, it’s about transformation of the individual.

Schweitzer UMC in Springfield is known as a church with a heart for mission. They also tend do things right, and in a big way. They started a food pantry, and the program grew to the point that they installed a walk-in commercial grade cooler in the church and bought a delivery truck.

But the church also aspires to be a hub of transformation, living into the mission of Making Disciples of Jesus Christ for the Transformation of the World. Some people at the church appreciated what was being done in mission, but wondered if they could do more in relation to transformation.

A team was formed, and they started with research on the topic. They started reading books, which included Toxic Charity and When Helping Hurts. They visited Mission Arlington, a cooperative mission effort in Arlington, Texas.

Jason Leininger is the associate pastor of discipleship at Schweitzer UMC. He said the church saw the number of people using their food pantry go from 300 to 15,500 in ten years’ time.

“There are a lot of people in Springfield dealing with issues of poverty,” he said. “We started questioning if we’re contributing to the cycle of dependency, because with that population we weren’t meeting our mission of making disciples of Jesus Christ for the transformation of the world.”

The team read a study by Ruby Pain that highlighted the value system of people living in systematic poverty is often based around relationships.

“When you’re trying to make a transformational change, it takes a mentor,” Leininger said. “When people see someone making an investment in their life, it deeply touches their soul.”

A concept in the book When Helping Hurts breaks mission service down into three areas: relief, rehabilitation and development. Most mission service and charitable organizations fall into the category of relief – but relief work usually doesn’t help alleviate someone in a long-term, chronic poverty condition.

The book also made reference to a program called Jobs For Life. When the team from Schweitzer UMC looked into it, they were surprised to find a location nearby, in Branson at the Jesus Was Homeless church. They went to a class, and then went to work on a plan to bring the program to Schweitzer.

They had someone among them who felt particularly called to the ministry.

“I felt all of my past experiences had led me to this point,” Kimberly Hammons said. She was hired in July of 2014, given the charge of creating a Jobs For Life program at Schweitzer UMC. Jobs For Life meets from 6 p.m. to 8 p.m. on Mondays and Thursdays for eight weeks.

Participants cannot graduate from the program if they have more than three absences. The program includes the completion of 15 required tasks. The curriculum is biblically based.

“The stories from the Bible involve themes of perseverance, attitude, character and integrity,” Hammons said. “We talk about David in reference to how good people can make bad choices. With Ruth, we’re talking about the importance of integrity and reputation. With the story of talents and the vineyard, we talk about expectations and life not always being fair.”

There is a formal graduation ceremony, complete with cap and gown, a guest speaker and a dinner. Graduates receive framed graduation certificates and letters of reference.

While in the program each student is paired with a mentor, called champions. The champions meet with students outside of class. They open their eyes to their gifts and abilities. The champions stick with their students for six months after the class is complete.

The Jobs For Life program at Schweitzer has several business partners. They take part in the classes and mock interviews, and also guarantee real interviews after the program is complete. They share their perspectives about what it takes to be a good job applicant – and a good employee.

Students prepare a life plan, in which they look at where they have been, where they are and where they want to go. They work on plans regarding how to get to the next step, and talk frankly about potential roadblocks that could keep them from getting there.

“Roadblocks are inevitable, but they don’t have to be permanent,” Hammons said.

Students take a career assessment, which results in three career interest categories. They then research potential jobs, considering factors like availability, pay and educational requirements. One student’s career assessment led her to the medical field. Now she is working as a Certified Nurse’s Assistant at Cox Hospital, and has a plan to get her four-year degree to become a nurse.

“Usually, by the fourth class we start to see a turnaround,” Hammons said. “That’s when we see a spark of hope and sense of excitement.”

More than half of the graduates of the program are now employed.

A key difference between Jobs For Life and a comparable government program is that Jobs For Life is very relationship-based. Harvey Hank, a member of Schweitzer UMC and one of the champions in Jobs For Life, said establishing a one-on-one relationship and really getting to know the students is important to him, and to the success of the program.

“You have to understand where someone’s life has been if you want to help them get to a better life,” Hank said. “I grew up in a loving, supportive family. I can’t think of any of our students who have had the benefit of that kind of relationship.”

“A lot of people don’t realize how many skills they are bringing to a job,” Hank said. “In addition to things they’ve learned on past jobs, many have skills they’ve developed through volunteering, or raising a family.”

When Kris Kauffman lost his job with the city of Springfield, his parents suggested that he try Jobs For Life. He wasn’t optimistic going in.

“I just thought this was some stupid program I’d have to go through for them,” he said.

Now he has a different perspective. He has earned his CNA, has two jobs and is working toward getting a job at a hospital.

Matt Myer had been a dry-waller, and his felony background created hiring challenges in finding work.

“I’d never had a resume,” Myer said. “I hadn’t even filled out applications. In construction, you usually just get the job over the phone.”

Myer said when he hurriedly threw together a resume for one class session, he got called out on it by the business person doing the mock interview.

“He said it looked like I’d typed it in five minutes, which I had,” Myer said. “I don’t like failure, and that’s what it took to motivate me. It was the best lesson I had there.”

“Before if I was unhappy with something that happened at a job, I’d just quit,” Myer said. “Now I realize that I’m not hurting the employer by quitting, I’m just hurting myself. I’ve learned to talk about issues, and to give it time to work things out.

This program has really kick-started a growing process in me. Now I feel like I’m back in motion again. That’s a pretty awesome place to be.”