As far as gardens go, the Greater Parkcrest-Wesley Community Garden is one of a kind. Located behind Wesley United Methodist Church in Springfield, this plot of under-utilized ground has been transformed into a place of true symbiosis. The community garden contains 28 raised beds in two sections, a traditional space where fertilizers and minimal chemicals are used, and an organic section where no chemicals are allowed.

On just about any day of week, you’ll find church members working along-side residents from the Parkcrest Neighborhood carefully pruning, picking, weeding and watering their garden plots. More than 60 Wesley members and Parkcrest neighbors have been a part of the building and management of the garden since its inception in September 2015. In addition to the raised beds, an orchard of 10 fruit trees and an 80x10 foot bramble patch have been added.

Gardening is one of Carl Redmon’s passions. The emeritus master gardener and long-time Wesley member has devoted hundreds of hours spearheading the effort to create a space that is functional as well as beautiful. “I’ve gardened my whole life, I love to see things grow,” he said.

The creation of the community garden has even inspired some first-time gardeners to give it a try. “As a first time gardener, I enjoy the help from the master gardeners,” said Wesley member Terry White. I am learning so much from them,
she said. 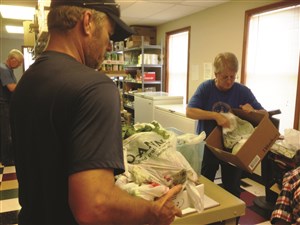 “Gardening is usually a solo activity. so it is nice to have people from the church and surrounding neighborhood to work with side-by-side. I love the idea that we are not only able to have fresh produce for our own families but can also provide them for those in need and may not always have access to fresh fruits and vegetables,” White said.

After struggling to garden on his own, Parkcrest neighbor Pete Boever found out about the community garden and rented a plot right away. “There couldn’t be a more perfect scenario. People are really committed to doing it right,” he said. “There’s education and hands-on training along with work nights where long-time gardeners are available to help you. It’s really building that sense of community. I’ve had a really good time.”

Produce is harvested from the garden every Monday, Wednesday and Friday. A team of volunteers harvests food, weighs it and delivers it to a local food pantry. To date, more than 800 pounds of fresh produce has been donated. And the total grows each week.

In addition to using volunteer labor, Wesley Church has received several generous grants to help offset the start-up costs of a community garden. Earlier this year, Wesley received a $4,000 grant from the Costner-Fulton Fund, and a $1,500 grant from the Missouri United Methodist Foundation. But as Redmon points out, “...one of our biggest assets is our people. We’ve had so much volunteer support, that’s helped us keep costs low.”

As for the future of the garden, Redmon has some ideas. He says, with an enthusiastic smile, “The future of the garden is going to be great. We’re going to turn it into a teaching garden for both traditional and organic gardening. We currently have classes every third Thursday, but we’ll be doing even more of that next year,” he said. “Just to look at the garden renews the spirit.”
News