By Teresa Stewart The last time Riziki saw her father, he was working in the church. As usual. She had returned home to the DRC (Democratic Republic of the Congo) hoping that the violence had passed. The hope lasted two weeks.

With little warning, the war returned. The family scattered quickly. Her nine brothers and sisters were lost to each other in the chaos. They all knew their father would not leave. He was a Methodist pastor. He took seriously the demands of the gospel to welcome every outsider. In the Congo, this meant sheltering desperate and despised refugees from Rwanda, Uganda and Burundi.

For the next 13 years, Riziki, her husband and children, lived in refugee camps in countries bordering the Congo. She had her father’s habit of welcoming outsiders in the name of Jesus. Even as she raised six children, she took in other refugees who were especially vulnerable: the boy who lost his arm, the young pregnant woman disowned by her family, the woman dangerously leered at by guards. They would all live with her. She would continue to shelter desperate and despised refugees. Even when she was one of them.

Over the past two years, Riziki has shared parts of her story with me. I met her when she first visited a United Methodist Church in her new country. It happened to be my church, too. We exchanged meaningful smiles and phone numbers. When the phone conversations proved too difficult, we began visiting each other’s homes and eating one another’s strange foods. The conversations were inefficient. But when words weren’t available, we tried laughter, prayer, song, awkwardness and honest silence.

I learned not to ask about the war. Over time, some stories would come out obliquely. Often, she would look at me and simply shake her head—“I want to tell you, but there are some things that you can’t understand.”

She taught me a simple Swahili phrase: Mungo ni mwema. God is good. It was the bedrock of each story. Even the painful ones. She spoke it not as hypothesis, but as certainty.

In late 2012, Riziki and her family received an official notice. A country had accepted them for resettlement. Her father appeared to her in a dream with reassurance. He took them to a farm, offering them food and blessing for the journey ahead. God would be with them. Just as God had already been with them. Mungo ni mwema.

Three days later, the family landed in Kansas City, Missouri. Riziki was pregnant with her seventh child, who would be named Grace.

Some months later, with Grace wrapped on her back in a bright yellow cloth, Riziki walked into Central United Methodist Church in Kansas City for the first time. She was ready. Ready to exchange phone numbers. Ready to join. Ready to start ministry. Even while she cleaned office buildings at night and studied English by day.

She told me about the beleaguered refugees living around her. They needed to know that they were not forgotten. God was with them and for them. Mungo ni mwema. She wanted to start an African Praise Choir and Bible Study in her new church home. The choir would be called Kuomba Pamoja–Worship Together—because “all people worship side by side. There are no differences to God. God knows all languages. We do this together.”

There were overwhelming challenges. The exhaustion. The language. The night shifts. The transportation. And the thousand little, unimagined barriers—like the church’s database that couldn’t accommodate seven different last names in one family.

She and I decided to start with a multicultural Bible Study on Sunday mornings. Each week I would bring my carefully-considered plan. Each week my plan failed. The study would end up in a wildly different place than I anticipated. New refugees trickled in. Not all spoke the same languages. We had no translator. Understanding each other was slow, tedious work. Sometimes we left exhilarated. More often, lost and frustrated. The idea of the African choir seemed to languish.

Finally, Riziki came to me with her own plan. She would be starting a season of prayer and fasting to ask God for a helper to start the African Choir. In the Zambian camp, she had a helper named Solomon. Together they directed choirs and planted a new congregation outside the gates of the refugee camp. Riziki explained, “I can’t do this work alone anymore. I need someone like Solomon to help here.”

When I suggested other solutions, she offered simply: “When you empty yourself out, then God can fill you. I trust God for whatever I need.” 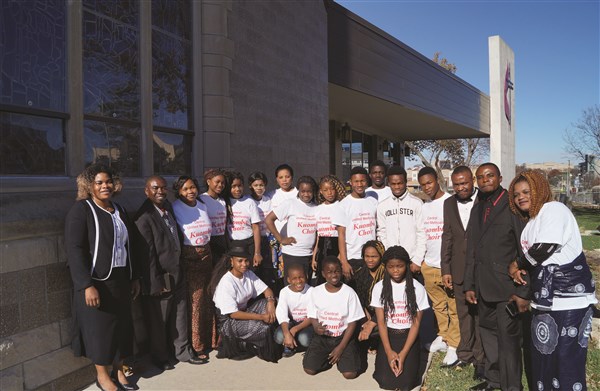 There are 3.6 million unsettled people within the Congo—casualties of the devastating civil war. There are still 467,000 Congolese refugees in camps in neighboring countries. Most have been confined in these camps for over a decade. Twenty-five countries around the world receive some small fraction of refugees from this area. In the United States, there are hundreds of cities that receive refugees. Among those cities, Kansas City receives a relatively small number. The settlement process is long and opaque. The refugees get no voice in where or when they might be offered sanctuary and a new home.

“No!” she exclaimed, “You don’t understand. This is my partner Solomon. My partner from Zambia. I asked God for a partner. God brought me my partner. This is why I trust God. Everything is possible with God.”

In the months that followed, the congregation began to touch the edges of this mystery unfolding among us. Solomon was not only a gifted keyboard player and teacher. He was also a skilled translator of Swahili, English, Portugese, French and a handful of other languages.

The ministry grew. With lots of bumps and messes and anxiety, it grew. The convoy of cars picking up new African refugee families for Sunday worship could not keep up with the numbers. Central, nervous at the financial commitment, hired a bus, which quickly filled. Within months, the congregation had the blessed challenge of 40 additional children in Sunday School. Mungo ni mwema!

But there was something more. Those messy months dared us to give up on a tidy approach to ministry. And sometime during this transition, Riziki shared with me another prayer-vision.

Her father came to her again in this dream and showed her a farm with beautiful fields. Some of the fields were already growing. But her father pointed beyond them to ground that was not yet planted. He said that something new would happen soon. Something more. Something that would make her ministry even bigger and clearer. She should wait for it and be ready.

Shortly afterwards, I overhead news from the Conference Office. A Congolese pastor named Fataki had arrived inexplicably from Africa. He spoke Swahili and Portugese, almost no English. He came with his wife and nine children. The Conference was confounded: what in the world would they do with him?

I shared the news with Riziki. She threw her head back and laughed. Because she already knew. Mungo ni mwema. God is good.

Rev. Fataki now works nights cleaning the kitchen of a casino in Kansas City. But he is also appointed as a quarter-time pastor at Central United Methodist Church. He preaches. Solomon translates and leads music with Riziki. New families keep joining. The bus no longer holds all those who wish to worship pamoja—together—on Sunday. There’s also a Saturday worship service and choir practice in the neighborhood where most of the refugee families call home.

The mess and inefficiency continue. The path ahead is not clear. Needs and challenges emerge weekly. But Central is learning to declare nonetheless Mungo ni mwema and to delight in the hope that all persons will see it pamoja.

In November, the Kuomba Pamoja African Choir recorded an album of eight original songs by Riziki and Solomon. The CDs cost $20, which also provides a free CD to those who cannot afford one. Contact KuombaMinistry@gmail.com to purchase.
News