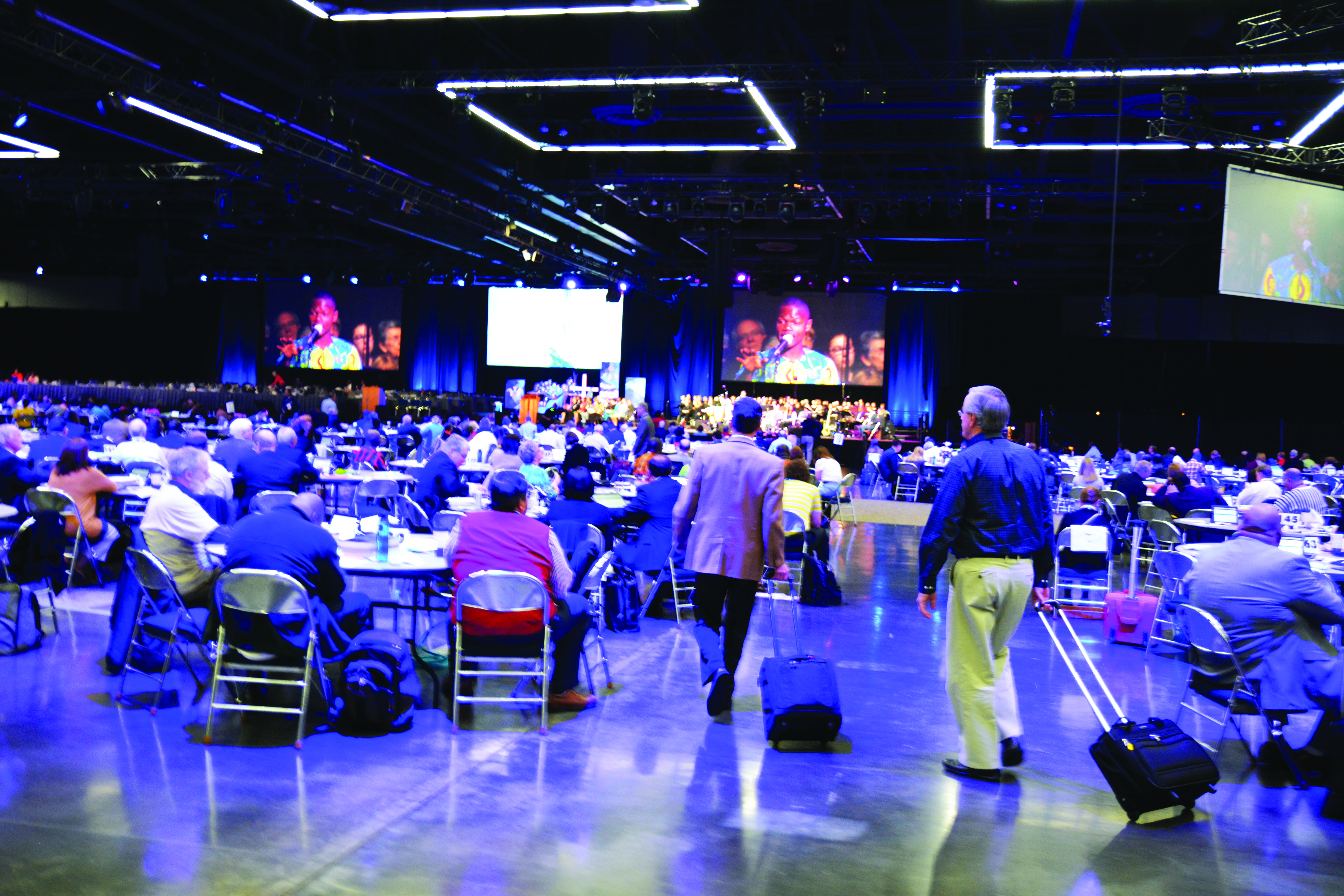 It’s also an increase over the $599 million budget proposed to the 2016 General Conference delegates, which would have been The United Methodist Church’s lowest in 16 years and meant the lowest apportionments to conferences in just as long.

That budget proposal came from the General Council on Finance and Administration and the Connectional Table, which coordinates the denomination’s agencies. The two groups collaborated in developing the budget over the past three years.

The Rev. Bill Arnold, a delegate from the Kentucky Conference, made the motion to boost the theological education fund to $10 million.

“We’re woefully underfunding theological education for the very part of the church that is growing,” he said.

Earlier in the week, a number of African delegates argued for the increase when the budget came up. Among them was the Rev. Jerry Kulah, dean of the Gbarnga School of Theology in Liberia. Delegates voted for the increase 406 to 379.

“This $10 million is going to help the more than 26 theological institutions across the central conferences to train more pastors, improve the facilities we have and help the teaching environment,” Kulah told United Methodist News Service.

In addition, delegates, for the first time in history, also established a set formula for central conferences (church regions in Africa, Asia and Europe) to support the denomination’s global ministries.

When asked about the budget increase, Missouri Conference Director of Financial and Administrative Ministries Nate Berneking said he understands the motivation, but is concerned about the General Conference putting a larger apportionment on churches that are struggling financially.

He suggested that there can be more direct ways to support theological education in the Central Conference.

“We have found that an alternative way of supporting theological education in Africa is through the deepening of relationships with our Mozambique partners,” Berneking said. “We currently have a number of individuals and local churches supporting Cambine Theological Seminary students as well as laity and local pastors at the Gondola Training center. This is one way of growing in radical generosity while at the same time building relationships that doesn’t continue to increase the General Church budget.”

General Conference — the denomination’s top policymaking body — establishes the total amount of money needed to support churchwide ministries. That amount is then apportioned mainly to U.S. conferences, which in turn ask for apportionments from local churches.


Getting to a Budget

Getting to the budget took some time despite a number of efforts to move the discussion along, including shortening the voting time to 10 seconds.

After approving a number of budget reports from the General Council on Finance and Administration, delegates voted to consider the remainder in one bundle.

Delegates next debated a motion to refer the whole budget back to the Connectional Table and General Council on Finance and Administration board to come up with a way to get the budget back to $599 million while keeping the additional $5 million for theological education. Delegates ultimately voted both motions down. Still, that did not stop multiple points of order and parliamentary inquiries from delegates.

At one point after several points on parliamentary procedures, including a delegate calling for an end of debate, Chicago Area Bishop Sally Dyck — the presiding officer for the morning session — suggested a “hot tip” to move things along.

“You don’t go to the mike,” she said to laughter.

As lunchtime rapidly approached, Dyck chose to throw caution to the wind and call for a vote on the budget package.

"I’m not looking at this thing,” she said, pointing to the electronic queue where the bishops see the names of delegates wanting to speak. “You can accost me at lunch.” The final budget won approval by a vote of 751 to 33.


Breaking Down the Budget

So what did delegates actually approve? The proposed budget allocates the following:

$310.7 million for the World Service Fund that supports most of the denomination’s 13 general agencies (including United Methodist Communications, which encompasses United Methodist News Service)

$8.2 million for the Interdenominational Cooperation Fund, which supports the church’s ecumenical work

The delegates also approved a new source of giving: apportionments from United Methodists in central conferences.

Under the formula, the requested giving would go up to $5.1 million and support both bishops and the General Administration Fund.

The formula actually asks European United Methodists to give less than they currently contribute. However, some European church leaders plan to continue voluntarily to give $2.9 million.

The finance agency requests apportionments from each U.S. conference based on a formula that includes its local church expenditures, local church costs, the economic strength of the conference and a base percentage approved by General Conference. Even with the slight budget increase, U.S. local churches are unlikely to feel much effect.

U.S. churches, on average, retain slightly more than 85 cents of every dollar they collect in their offering plates.

It can still be difficult for Conferences to swallow an increasing General Church budget when they have been tightening their own belts. Missouri Conference Director of Financial and Administrative Ministries Nate Berneking would have preferred to seen the original $599 proposal go through.

“I was glad that the Connectional Table and GCFA heard and responded to concerns expressed by many bishops, conference treasurers and delegations by lowering their initial proposal before General Conference began,” he said. “The slight increase adopted through amendment will have an effect on our conference budget, but I still anticipate presenting little or no increase over the budget presented last year.”

Most of the giving outside the local church goes to support jurisdictions, areas, annual conferences, districts and direct-billed pension and health benefits.

Hahn is a multimedia news reporter for United Methodist News Service. Contact her at (615) 742-5470 or newsdesk@umcom.org.