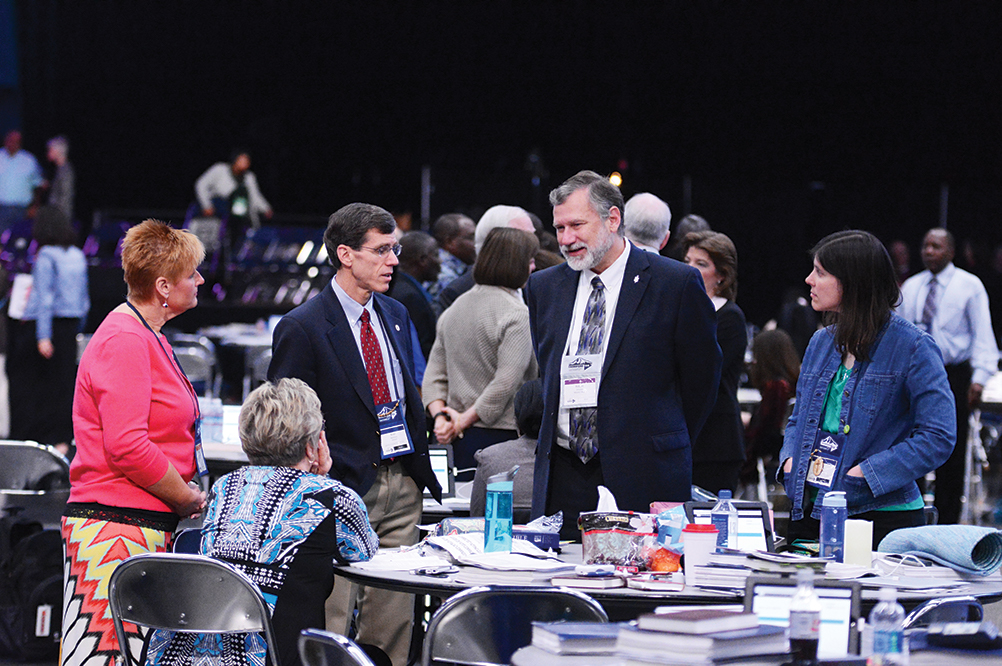 Bishops sometimes refer to themselves as the potted plants at General Conference, because they sit on the stage, but have no voice or vote on matters before the Conference. But this year those plants were forced to bloom, and they delivered.
It became clear at previous General Conference Sessions that discussion around issues relating to homosexuality were becoming more contentious, and it was requested that a method be developed that would facilitate the conversation in a more grace-filled manner than simply debating the issues via Robert’s Rules of Order. This lead to a creation of Rule 44, which would have broken the body up into small group discussion units to address legislation related to these issues prior to votes on the main floor. The use of Rule 44 was debated extensively and eventually voted down.

Rev. Adam Hamilton of Church of the Resurrection in Leawood, Kansas, brought to the floor a request for the Bishops to provide leadership on the issues before them. The Bishops worked on a proposal that evening and presented it the next morning. It was passed.
Missouri Bishop Robert Schnase shares his thoughts on the proposal, and the way forward:
While it seems unusual to people unfamiliar with our processes, Bishops in the United Methodist Church are restrained from participation in legislative issues. In fact, for a Bishop to speak at General Conference requires a vote of the conference to invite such participation. Bishops preside, they do not legislate. However, the solutions to our long term divisions and conflict in the church require robust conversations, strategies, and planning that will inevitably lead to legislative changes.
We are stuck as a church right now, and we are doing considerable harm to one another through our continuing conflict over human sexuality. As Bishop Gregory Palmer said in the Episcopal Address, “Our capacity to turn on each other is destroying the soul of our church.” Any solution will require, not merely addressing various paragraphs in the Book of Discipline, but a reordering of our life together so that varied expressions of ministry can co-exist in the same church. The leadership demanded of the Council in the motion that was made from the floor of General Conference invited the Council of Bishops into a process of planning, convening, strategizing, and developing concrete solutions that I think are required if we are going to engage the issues that divide us with significant focus and effectiveness. I welcomed the invitation to active engagement with the Council of Bishops.
A number of people representing divergent perspectives on the issues of human sexuality have been offering possible solutions in preparation for General Conference, and many bishops have also been involved in these conversations. While the Bishops had several significant conversations together in the immediate aftermath of the General Conference call for leadership, they also had the benefit of several templates that outlined possible steps to take to move forward. These included such ideas as the formation of a commission, the possibility of a called session of General Conference, and the deferring of petitions related to human sexuality for the remainder of the 2016 General Conference. The plan we proposed for a way forward does not match any of the pre-conference proposals, but borrows from several.

I supported the proposal. While the resulting document was the work of many voices, I personally invested significant time and energy to help the Council find a way forward, and I spoke actively in the Council to adopt the statement that ultimately was offered. For me, the purpose of the commission is to find a way for a variety of expressions of ministry to co-exist within one church.

The worship and preaching were excellent and powerful. The Episcopal Address was outstanding, perhaps among the best ever. The global nature of the church was never more evident, powerful, and positive as hundreds of delegates from Africa, the Philippines, and Eurasia fully participated in conference like never before. We celebrate outstanding ministries that we accomplished together to the glory of God, such as Imagine No Malaria and Africa University.

We established robust goals for the future. And we agreed to a way forward that avoided divisive and hurtful debates as we seek a unity that makes room for varied expressions of ministry in the future.
News