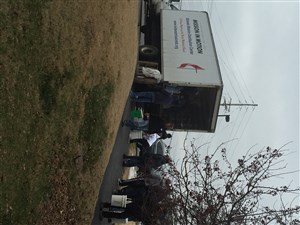 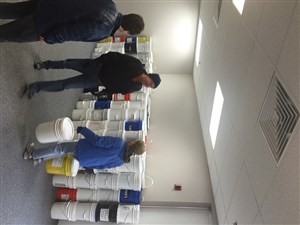 As Jesus said in Mathew 5:45, it rains on the just and the unjust. But when that rain comes down several inches at a time, it has a very different impact depending on where you are.
“Most of the homes that are flooded here are in an economically challenged area,” said Rev. Nora Jones, pastor of Pacific UMC. “It’s rental housing, and the ones who have renters insurance often aren’t covered for floods.”
Franklin County was already short on affordable housing. Now people displaced by the flood water are faced with the expense of staying in motels as they scramble for someplace else to go.
Torrential rains falling on saturated ground just after Christmas pushed several creeks and rivers near or past record high levels in the area east and south of St. Louis. Jones said a couple families in Pacific UMC had to leave their homes, and one single mother with three school-aged children had extensive losses.
A Christmas-time flood is very different from spring floods, because even though temperatures have been above average, it’s still cold. An impromptu team from Pacific UMC went out after church on Sunday and spent about five hours cleaning four homes that had been flooded.
“Even with waterproof shoes and gloves, you still get very cold,” Jones said. “I was exhausted at the end of the day. I have new respect for firefighters who have to work in water in cold weather. Our greatest need is insulated, water-proof gloves.”
Jones spent Monday meeting with the Red Cross, and making plans regarding how to best assist people at this time.
“The big challenge is going to be helping people with housing,” Jones said.
Rev. Tim Schulte, associate pastor of Eureka UMC, said the community turned out to help in a big way, and many church members were involved. The church distributed 100 flood buckets, and is helping uninsured people with replacing home furnishings.
“We had about 30 families in our church with homes or businesses affected, but in most cases it was just water in the basement. We didn’t have anyone displaced,” Schulte said.
Eureka experienced a big flood in 1982. This one surpassed it by three and half feet.
“It was surreal to see water where you never expected it, and everything that was going on relating to that,” Schulte said.
Rev. Greg Connell has preached from the pulpit about how United Methodists respond to disaster, but last week he experienced it first-hand.
Connell’s community of Union was hard-hit by flooding on December 29 when the Bourbeuse River reached an all-time high of 20 feet above flood stage. About 30 homes and another 30 businesses were flooded. The people of First UMC Union don’t live in the flood zone.
“Only one of my parishioners was directly affected, and he was able to get his stuff out of his home before the water came up,” Connell said.
On New Year’s Eve, Connell went to Manchester UMC and picked up 25 flood buckets, and took them to people in the hardest hit areas of Union, and dropped the remainder off with the mayor at city hall.
“They couldn’t believe we were there already,” Connell said of the mayor and city administrator. “They just said, ‘Where did you get these? They didn’t have anything yet, and supplies from the state and the Red Cross weren’t due until next week. I never thought of the significance of getting there first until I saw it first-hand.”
Connell did another run on Saturday, January 3, and brought another 25 bucket to city hall in Union.
At Valley Park UMC, the church had some water in the basement, but that didn’t stop it from serving as interim city hall for a few days. The town was evacuated from December 29 through January 1.
“But our church is across the street and up on a hill, so the city offices just moved in here for three days,” said Rev. Steve Mitchell.
Valley Park experienced flooding in the 1980s and 1990s, but this time the now taller levies held, and the community was spared from much damage.
All of the churches had regularly scheduled worship services on Sunday, and most reported attendance was up a bit for the first Sunday of the year.
“We were joined by a couple families who were stuck at the Radisson due to road closures,” Mitchell said.
New Hope UMC was an active part of the community response as the waters rose in Arnold. Rev. Steve Majdecki said about 150 homes were affected – although not that many were flooded. Some were cut-off by flooded roads, or lost power due to flooding. On New Years Eve, the church was an impromptu hospitality station for National Guard troops who were on hand to assist with traffic control around the closed roads. New Hope connected with Manchester UMC to get 200 flood buckets sent to the central aid distribution center at Fox High School and the Salvation Army. New Hope also sent clothing from its on-site clothing ministry to the main distribution center so people in crisis didn’t have to go to two different locations.
“Today (January 4) the roads are open and we’re past the flurry of activity that comes with a crisis, and are preparing for the clean-up that is still coming,” Majdecki said.
For more information on disaster response in the Missouri Conference, go to http://www.moumethodist.org/disasterresponse2015flooding.