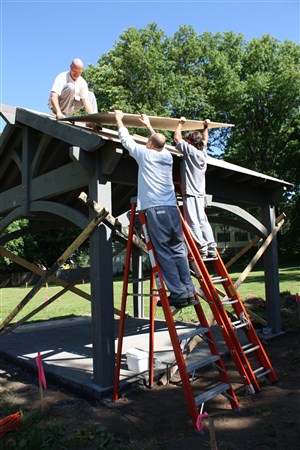 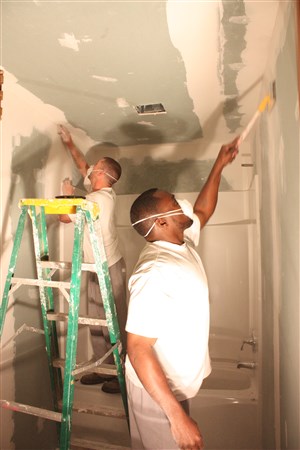 Every morning during the week of May 16th, inmates arrived at the church, ate breakfast and partook in a devotional before setting out to work as a part of the 21st Annual Boonslick Area Community Service Project. The project, sponsored by the National Organization of Prison Fellowship and led by the Nelson Memorial United Methodist Men, invites a handful of inmates out of Boonville Correctional Center and into community service and fellowship with the Lord every spring.

Tom Maxwell, the Missouri volunteer state director emeritus for Prison Fellowship Ministries, says the week is about giving and loving the inmates as well as encouraging them to find a church home upon release and a Christian accountability partner during the remainder of their sentence.

This year, the men built a gazebo for the newly commissioned Cancer Memorial Park at Kemper Park in Boonville. It rained at the beginning of the week, so the men worked inside renovating a Habitat for Humanity house, also in Boonville. Projects in the past have included building a garden and rest stop at the Katy Station on the Katy Trail and building a fence around the area homeless shelter.

The program offers an important aspect of the restorative justice process: community involvement. For over 20 years, the Boonville area has received this project and its workers with open arms. Each day, a different church hosts the men for a lunch. This year a local baseball team came and served alongside the inmates. Maxwell says a local woman heard about the program on the radio and brought them cinnamon rolls for breakfast.

On Sunday, the program culminates in a dedication service where the men are prayed over and receive a certificate of completion and class challenge message from a former inmate.

Yet, above all, the mission of the Boonslick Area Community Service Project is to encourage these inmates to seek a church home upon release. Through devotions and conversation, the Nelson Memorial United Methodist Men and the Boonville area citizens showed them just a taste of what a life of service and Christian community looks like.